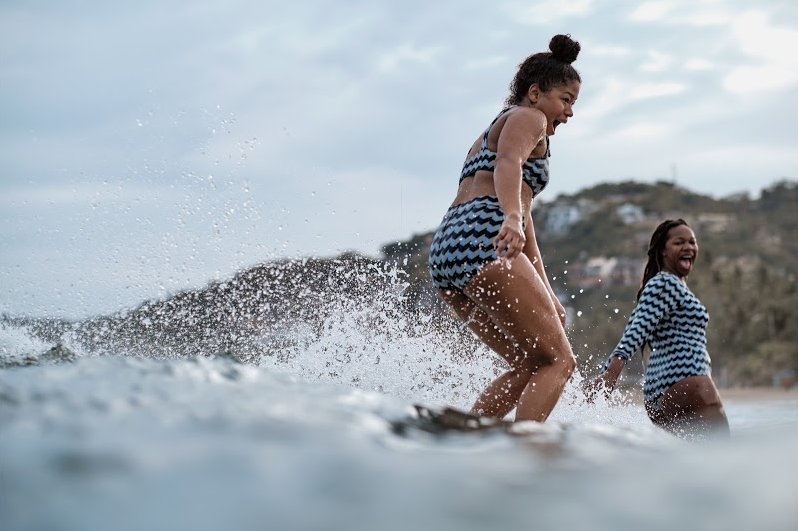 I’ve felt invisible in the water,” says Chelsea Woody, when asked how being an African American woman has influenced her experience as a surfer. “I’ve definitely had folks tell me that I don’t look like a surfer and that they don’t think I can surf based solely on how I look. I’ve had the experience of people disregarding me in the lineup, or paddling around me, even as they treat my white girlfriends of the same level whom I paddle out with differently.”

She pauses, thinks, and repeats, quietly: “Yeah, I would say I’ve felt invisible.”

Originally from Seattle, Woody and her husband relocated to Santa Cruz five years ago because they wanted to reside where they can surf every day. Now a nurse working at an Eastside hospital, she often spends her downtime hitting local waves with her favorite board, a Kalu 5’6” quad fish. But it can feel lonely as one of very few Black women in the water.

Last year, in an effort to remedy this, she co-founded Textured Waves, a collective that started after she met fellow Black female surfers across the country online. They were seeking community, found each other, and then launched Textured Waves with an Instagram campaign to spotlight women of color—and especially Black—surfers. As of this writing, the account had 16,800 followers and was quickly growing. The Textured Waves slogan? “Women of all shades, riding the waves.” 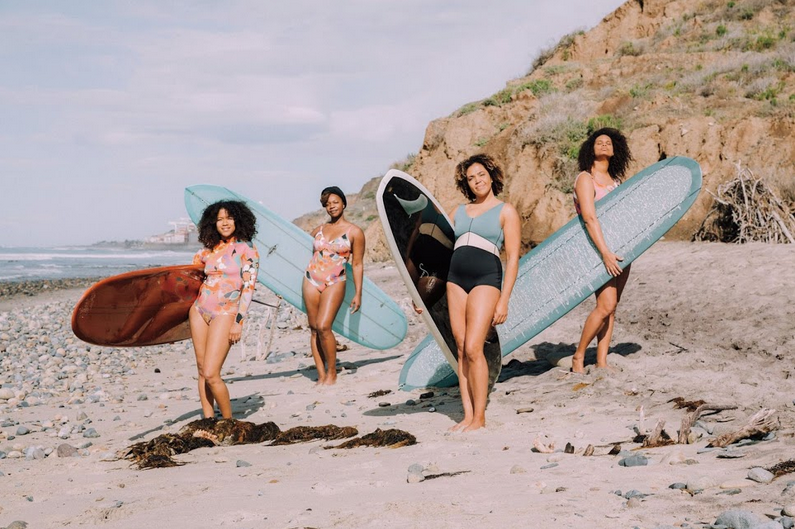 “Our whole mission is to propagate that imagery to the world and surf media, and to inspire younger girls to get into surfing that may not look like the typical surfer girl,” Woody explains.

While Woody is in Santa Cruz, the other co-founders— Gigi Lucas, Martina Duran, and Danielle Black Lyons—live in Florida, Hawaii, and Southern California, respectively. The group helped set up and promote various Black
Lives Matter UNITY paddle outs, hosted a Hawaii pilot surf retreat for women of color in August of 2019, and is featured in the short film “Sea Us Now” (a collaboration with Seea swimwear that was written and co-directed by Woody).

Textured Waves has received a lot more notice this year since the Black Lives Matter movement and protests fueled by the police killings of George Floyd and Breonna Taylor (and so many more) commanded headlines. Woody recently spoke with Waves about how surfing is affected by—and can play a role in healing—racism in our communities.

“Yes, surfing is not gonna fix racism in this world,” she says, “but it’s one way to connect with surfers and show them how their lives and surroundings are impacted by systemic racism.” 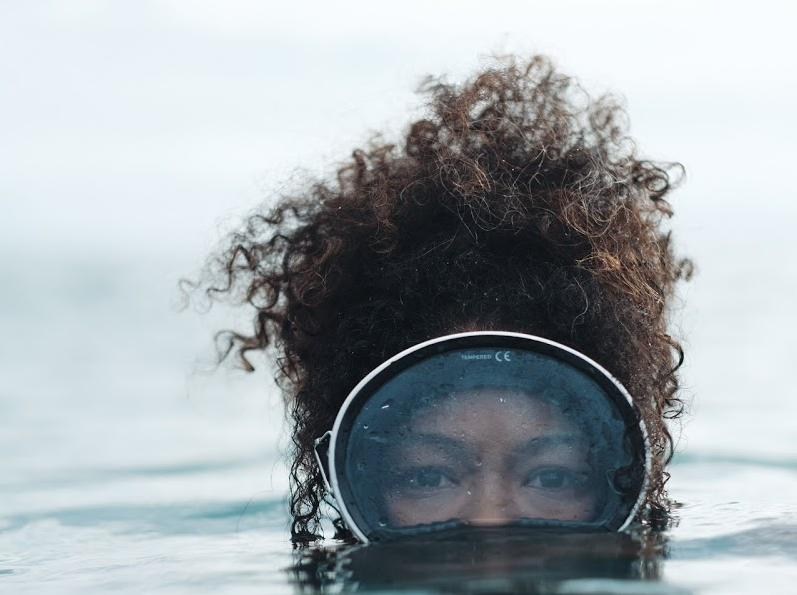 Some may feel diversity in surfing is a minuscule concern compared to other issues of injustice that are being addressed today. How does surfing fit in with the larger racial justice movement?

I think the lack of diversity in surfing on the mainland is an extension of the structural racism that we have in this country—when you think about water spaces and who “belongs” in those spaces. It may seem very minuscule to somebody who doesn’t live in that world of generational restriction. But for example, if your grandparents were told that they cannot hang out at a certain beach or swim in a certain place, that gets passed down and it takes generations to undo that. Surfing is a broader visual of what systemic racism touches, and I would suggest that systemic racism touches all aspects of our daily lives.

How is surfing a platform for creating change?

I think social activism comes in many different forms, and with surfing, I feel like localism reflects some of the structural racism that this country has kind of been built on. If we just look back 60 to 70 years ago during Jim Crow and beach segregation and access to water—that has played a big role in what we see in outdoor spaces today and, specifically, beaches and surfing. I think that surfers tend to be environmentalists because they love the ocean and care how the environment is treated, but you have to open up that space to get more people on board with protecting it by letting them have a connection to it as well. And I think if you don’t have examples of folks that look like you in a space, you have a hard time imagining yourself in those places or achieving those things.

How can the Santa Cruz community improve when it comes to issues of race in surfing?

Of course, when we look through the pages of Santa Cruz Waves, it’s a lot of the same people and imagery being recycled. Maybe there can be some involvement with groups working on diversity, like The Wahine Project, Brown Girl Surf, and City Surf Project—there are a lot of groups in the Bay Area working on this. Also, I understand that waves are in limited supply and the thought of having more people in the lineup is cringeworthy, but the access to outdoor spaces is for everyone, and we have to learn to share that space. I think we have to let go of the idea that a space belongs to a particular person or group of people.

How have the recent Black Lives Matter protests affected your life and the Textured Waves project?

It’s been wild. Even paddling out at my local break, I have found that people seem to be a little more welcoming; trying to be more conscious of how they treat others around them. As far as Textured Waves, we’ve been getting a lot of traction from big surf companies that are realizing they do have some changes to make and that there is a lack of diversity, especially among African Americans, in the surf industry.

Being a nurse and a founder of Textured Waves are both focused on healing the community, in their own ways. Do you feel they are related?

As a nurse I go into work every day … [and] I care for people regardless of their background. And I think that is similar to Textured Waves in that we want people to feel welcome and not be treated differently because they may look different.

What do you want readers to know about Textured Waves?

That we’re not professional athletes, we’re just African American female surfers that want to share that we’re here in the lineup. We also want folks to be able to build off this history; we want to inspire the next grom to look back at that legacy because it’s not something we were really afforded. It’s not about fame or anything, it’s about showing the next generation what is possible for them.

What actions can people take to advance racial justice through surfing?

I think there can be a little more kindness in the lineup, because the people you’re yelling at could be the same people that may take care of you at the hospital. It’s a small town, so be kinder to the folks around you regardless of if you’re in the water or on land. And education about the history of surfing in Santa Cruz is beautiful, but I think I want people to examine why it isn’t as diverse. I think that’s an extension of what was going on during the time of segregation and during the time period when surfing really started to gain popularity.

Find Textured Waves online at texturedwaves.com and on Instagram as @texturedwaves. The Sea Us Now short film can be found at theseea.com.

Want to learn more about the history of race in aquatic spaces in America? Woody recommends diving into the book Contested Waters: A Social History of Swimming Pools in America by Jeff Wiltse, and the 2011 surfing documentary White Wash by Ted Woods.

One comment on “Chelsea Woody: The Textured Waves co-founder on why representation matters”