What makes the wildlife photographer tick

Even a Q-tip can be a powerful subject.

Just ask Justin Hofman, whose infamous underwater shot taken in Indonesia—of a seahorse lugging around the tiny piece of human trash—went viral in 2017 and made him a finalist in his category for the Natural History Museum’s prestigious Wildlife Photographer of the Year award. It even got pop culture love by way of Kim Kardashian, who retweeted the image. 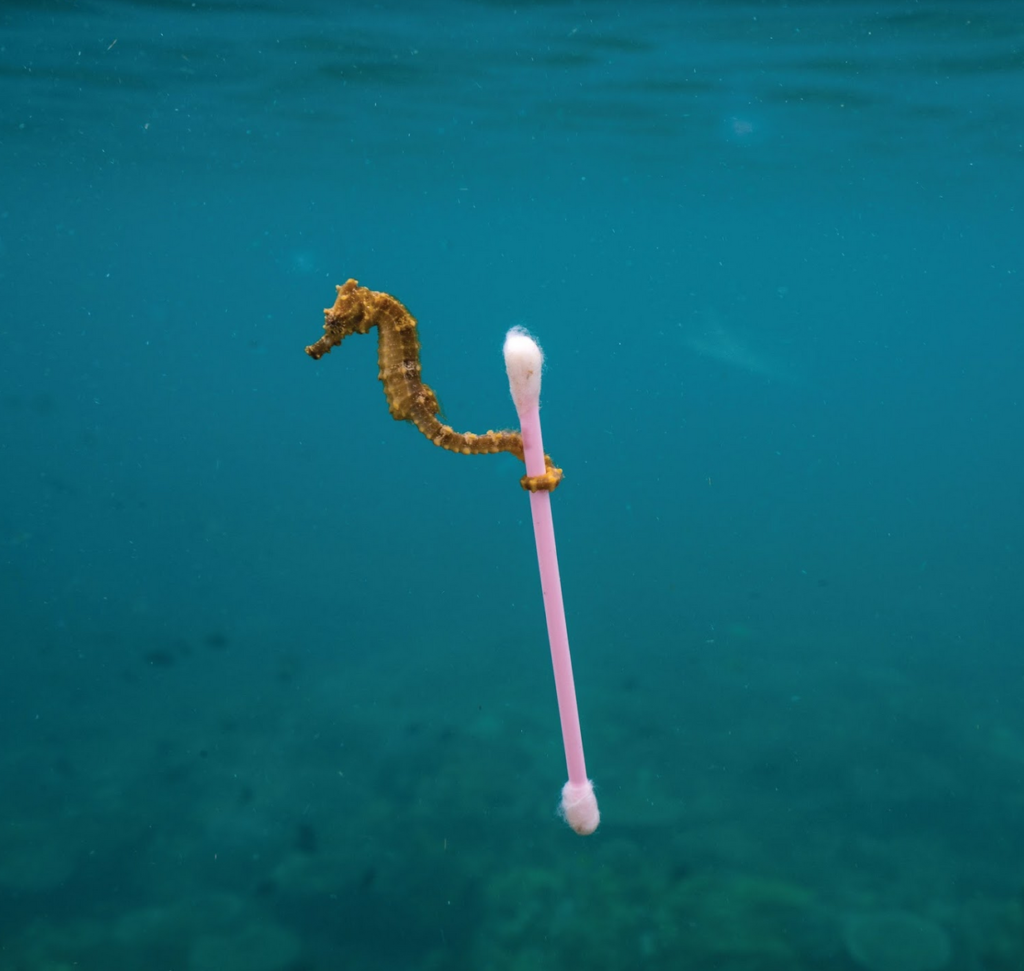 “This photo serves as an allegory for the current and future state of our oceans. What sort of future are we creating and how can our actions shape our planet?” Photo © Justin Hofman

“I still can’t believe how my seahorse photo has found its way into so many people’s lives,” says the 36-year-old Pacific Grove resident.

Titled “Sewage Surfer,” the now-iconic photo is proof of how human byproducts intrude on even the seemingly unreachable. Today, plastic waste has become a common travel companion for delicate creatures, while overfishing has left underwater terrain barren of inhabitants nature intended to be there.

That disturbing reversal of roles makes the impassioned photojournalist tick, and his commitment to conservation deeply informs his work.

At the time of this writing, Hofman’s public Instagram bio reads, “My personality is like global warming: seriously messed up and probably too late to change.”

He bought his first SLR in 2006 after being inspired while helping out a National Geographic photographer. At first he explored macro photography—“because all I had to shoot were the bugs and little things I could find around the house”—and then he moved on to bigger beasts.

But before diving into the world of film, he studied marine biology at UC Santa Cruz, where he also completed a professional scientific illustration certificate in 2006.

“I loved to illustrate and it has helped my photography greatly, but I just couldn’t spend that much time inside,” says the self-described functional introvert. “I need to be out with the animals to be happy.”

It’s no surprise that when we catch up with the compelling photographer during a rare moment of downtime, he’s in Antarctica documenting Weddell seals with the BBC Natural History Unit for “Frozen Planet 2.” 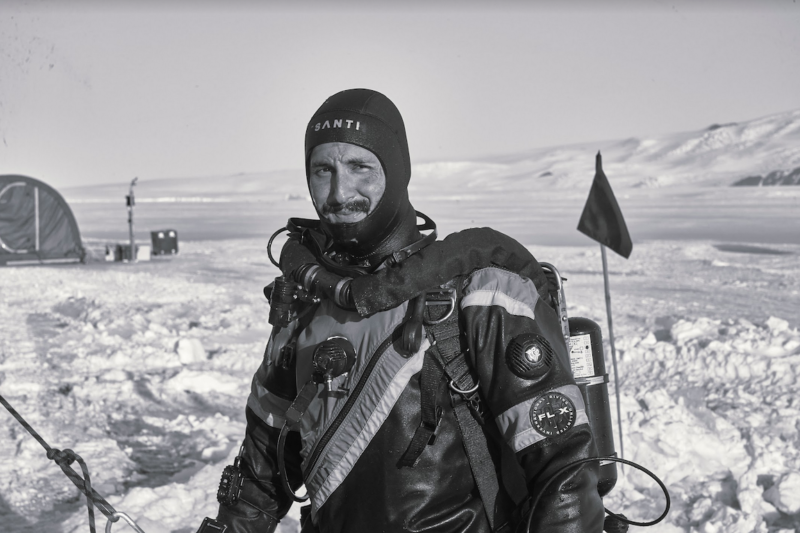 Hofman on location in Antartica.

“We’ve managed to capture scenes no one knew existed and will result in a new understanding of this species of seal,” he reveals of the expedition.

Hofman then goes on to share with Waves how he balances exposing places in photographs while trying to protect them (much like the way surfers stay hush about a firing break), what keeps the continent-hopper curious, and why he now has regret for taking that wildly popular seahorse photo.

How does photography differ in satisfaction from creating science illustrations?
With illustration I am never quite as fulfilled because I have full control of the scene. I can literally create whatever I want, so in that way it feels pretty contrived. A photograph is a moment. It’s something that happened in reality and I was there at just the right moment to capture it. I don’t have any of my art hanging on the wall of my house, but I have lots of my photos. Not being in control but still capturing something beautiful is way more satisfying that spilling ink onto the page.

How does the field of conservation photography direct your work?
This is such a tricky question. Unfortunately, I think that conservation photography is heading in the wrong direction much of the time. I find that social media is causing a lot of people to get the feeling of false hope by what they are seeing online. They may see a striking photo that hits hard and they hit ‘like.’ They see that thousands of other people have also liked the photo so there is a bit of relief in thinking that something must be happening as a result of their likes. This is false. We are mindlessly consuming so much important content and just moving onto the next issue without thought or action. A double tap doesn’t mean you’re actually affecting the planet. 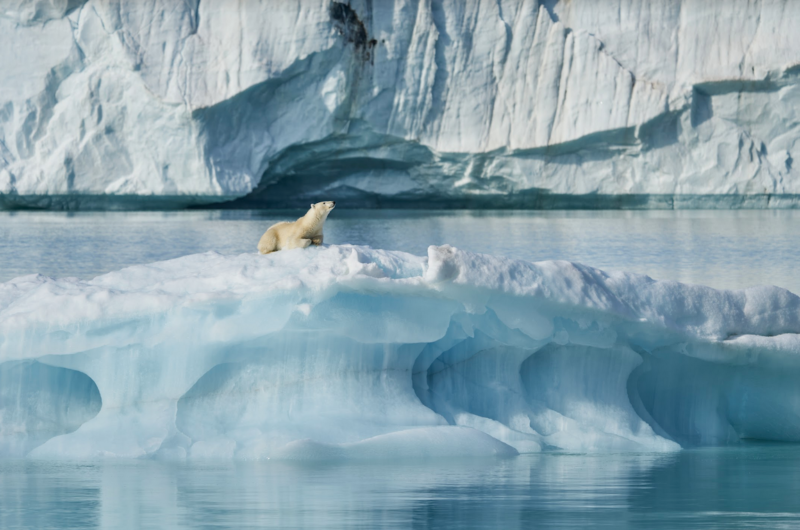 While shooting this scene, Hofman witnessed this mother bear catch and kill a seal in open water hundreds of feet from shore. Where there is food the bears will find a way. Photo © Justin Hofman

How do you resolve the tension of taking photos that expose an environmental concern but may also expose a place to further human damage?
I have stopped tagging specific locations in my work. I think this may come from my surfing experience and trying to keep lineups from getting crowded. If the waves were firing, you wouldn’t rock up and go spouting off to all your friends that such-and-such spot was epic today, because tomorrow it will be packed. I have been guilty of oversharing on social media in the past, but that was before it became evident just how massive this wave of social media would be. … I will continue to be a champion for beautiful places by sharing my photos, but I will either be incredibly vague or purposefully misleading in some cases. If people don’t like that, then tough shit. Surfers will understand, some people on social media will not.

What do you hope viewers take from your “Sewage Surfer” photo?
I wish people would understand that their actions at home can have great impacts on marine wildlife. I wish I had captured an equally-as-impactful photo that had to do with over fishing or fisheries conservation, because honestly that is way more important to our ocean’s health than plastic. In some ways, I really do wish I had never taken the photo because I fear that it has distracted the general public from much larger issues at hand. But selfishly, I am glad that it happened because it really helped my career. Guess we can’t have it all. 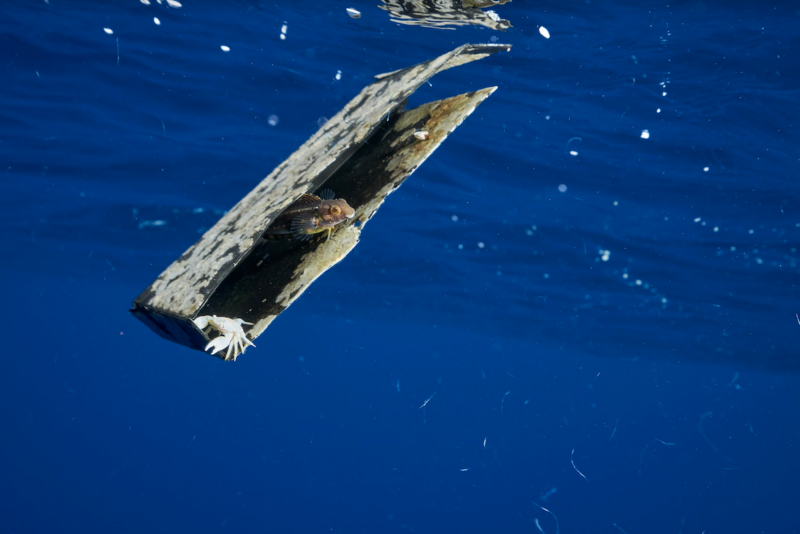 A goby and tiny crab use an old VHS case as their floating shelter. Photo © Justin Hofman

You’ve been to every continent. What’s left to explore that excites you most?
I would love to do more dives in submarines. We recently took a sub over 700 feet down on a wall in Antarctica and it was really mind-blowing to see all this stuff that no one else gets to see. The deep is where real exploration is going to happen next.

So, what’s next?
Next year I will be working on a project that will highlight the importance of national parks and marine sanctuaries, with a specific emphasis on the grandeur of our home, Monterey Bay. I can’t share too much about the project, but it’s going to be big.

Lastly, what would surprise people to know about you?
I’m really into heavy metal. Obscure European black metal bands and ultra-heavy doom. That seems to be what people find most surprising about me once they start to get to know me. I don’t know why my love of heavy music is so surprising. Nature is so metal and has also been the inspiration for countless bands.

For more info about Justin’s work visit his Instagram at (@justinhofman) or https://www.justin-hofman.com/ 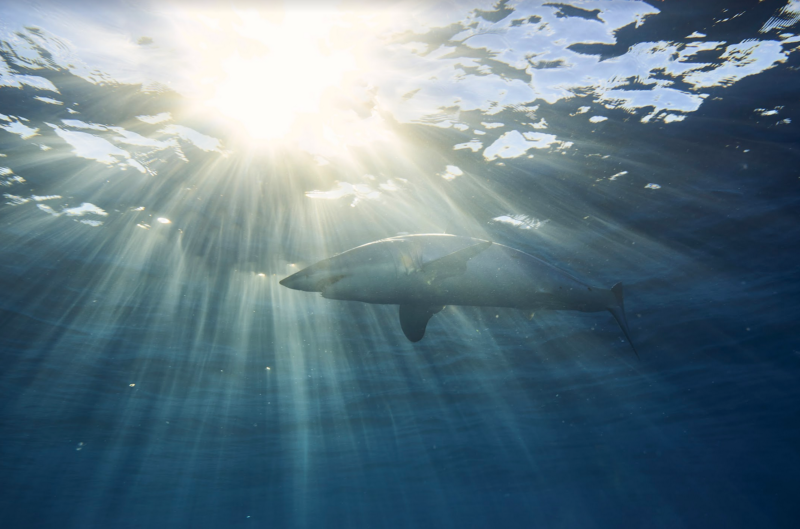 Best be ready with your head on a swivel when shooting Mako sharks in open water. Photo © Justin Hofman