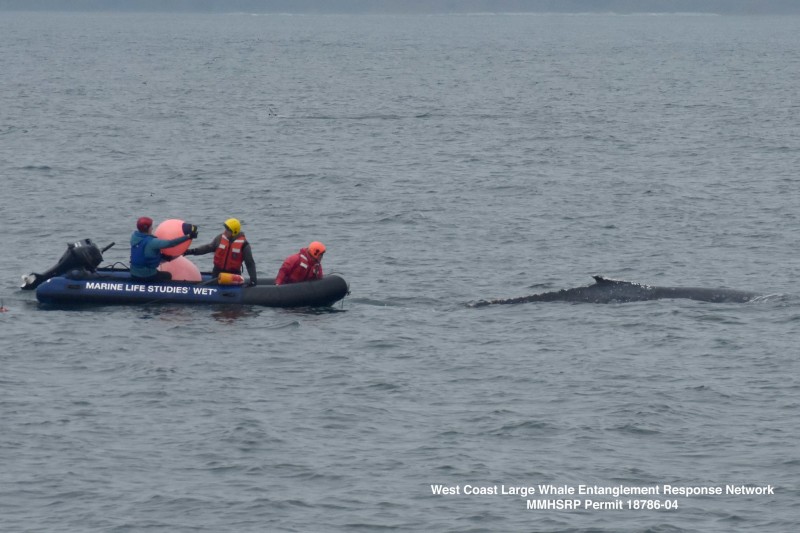 (Moss Landing, CA) – It was a multi-day, community effort that ended in a humpback whale swimming free after it was successfully disentangled in Monterey Bay on Friday, December 13th. Responders from the Pacific Large Whale Entanglement Response Network, including staff from the Marine Life Studies’ Whale

Marine Mammal Center (TMMC), successfully removed all the fishing gear that was wrapped around the body of the young whale.

The whale was first reported by a fisherman on December 9th and the US Coast Guard vessel Pike responded to and stood by until the response team arrived, but due to the whale’s unpredictable behavior it was lost. The following day the whale was spotted by Sea Spirit Ocean Safari, but unfortunately it was too late in the day to mount a response. On December 11th, a multi-agency search of Monterey Bay was conducted from sunrise to sunset and included: USCG aircraft, the USCG vessel Pike, a Monterey Bay National Marine Sanctuary vessel, a WET® team, and a Cascadia/SR3/TMMC team. Although the search turned up over 40 humpback whales, the entangled whale was not relocated.

Luckily on Friday the 13th, TowBoatUS, Santa Cruz saw the entangled whale and reported it to USCG. The WET® team was on the water nearby and able to relocate the whale and stand-by while other network responders from SR3, Cascadia and TMMC mustered. The response team determined the configuration was life threatening and the constricting wrap would cut into the whale’s body as it continued to grow. The team added 5 large buoys to help slow down the fast moving whale and cause it to stay near the surface. While being pulled behind the whale in a small inflatable boat, they were able to make a single cut to the line running across the whale’s back. The whale reacted sharply as all the gear quickly fell away and the whale swam away vigorously.

Many thanks to the USCG for their outstanding support conducting the search and the reporting parties who reported and documented the entanglement. The response was a success because of the support from so many members of the community and highlights the importance of standing by an entangled whale while calling 1-877-SOS-WHALe (1-877- 767-9245) or hail the United States Coast Guard on VHF CH-16.