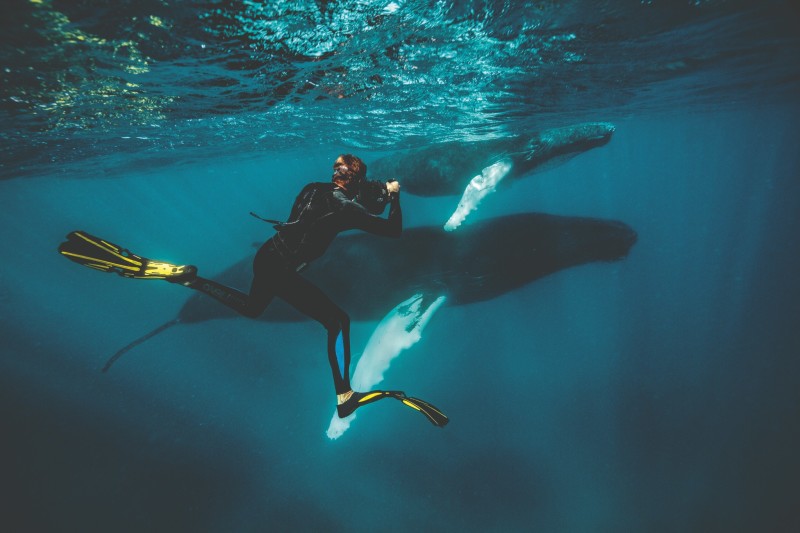 When Jodi Frediani says, “Whales have taken me around the world,” she’s not just spouting off. The Monterey Bay-based nature photographer has captured unforgettable images of these stunning creatures in regions like Africa, Thailand, Antarctica, Argentina, Brazil, Norway, the Caribbean and the South Pacific. While she has photographed other forms of wildlife, she specializes in marine species, with whales at the top of the list. Frediani, who holds a bachelor’s degree and graduate certificate in art and photography, also gathers photos of whale flukes and shares them with naturalists, scientists and hobbyists along the East Coast of the United States and Canada for the purpose of identifying individual humpback whales by the patterns on the underside of their tails. 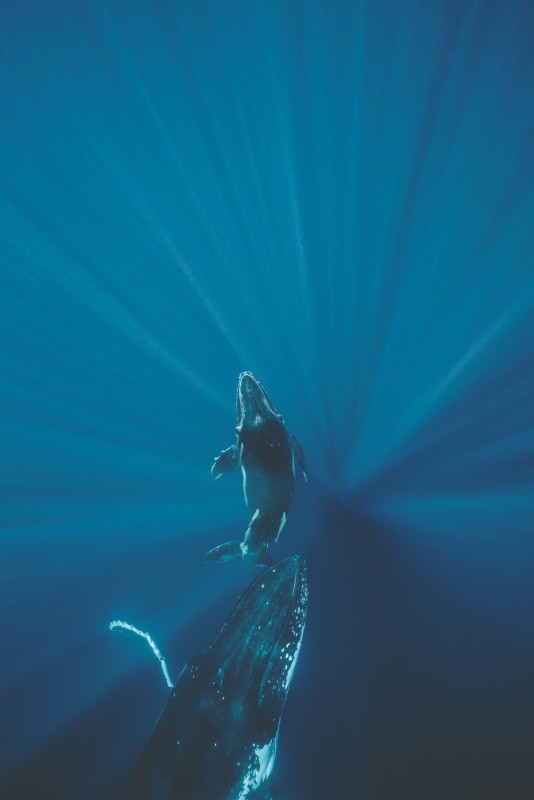 At the time of this interview, Frediani had just returned from Antarctica, where she took photos of whales, penguins, fur seals, crabeater seals and other species. She spoke with Santa Cruz Waves by phone from the Dominican Republic, where she has been swimming with humpbacks since 2002.

How do you stay as safe as possible while you’re swimming with and photographing whales?

In the water, I’m working with guides who know what behavior to look for. Humpback whales are not aggressive toward people; they’re large, they’re fast and if you don’t put yourself in the right place—which we just saw the other day with this guy who ended up in the mouth of a whale—you run the risk of getting hurt or killed. I would say he was exceptionally lucky that he didn’t get smacked in the head by the feeding whale. Wherever I swim, whether it’s in Tonga, the [Dominican Republic’s] Silver Bank or in Norway, where I swam with killer whales, at this point, I have enough of my own experience [so that] if I see something that whales are doing that I don’t think is safe, I will remove myself. I will say the reason I went to Tonga is that I really wanted to swim with a group of competitive whales, where a number of males are swimming together, vying for the right to escort the female in the group. The whales bash into each other, sometimes ride on top of each other, blow big bubbles. … It’s a very fast-paced, exciting activity. The boat driver and guide know what to look for. I have had calves inadvertently hit me with their flukes. One time the calf hit me on my thigh. I remember asking the guide what I did wrong, and he said, “You didn’t get out of the way!” [Laughs]

Well, in the old days, the group of people I went out with would line up and hold hands, and I would tell people to hold my skin or my wetsuit so I’d have my hands free for my camera. I don’t quite know how the calf did it, but he suddenly swam around behind me, and the next thing, he was coming underneath me. I’m shooting with a wide-angle lens, right? This pec fin that makes a pass just misses my head. This calf’s eye is staring at me; then I see the ventral pleats, then I see the tail stalk, and the next thing is the calf taps my camera body. I remember thinking, “Oh! That was cool, but I don’t need to do that again. I’m going to go down to the end of the line.” Of course, the end of the line means nothing to the calf. Five minutes later, that calf found me, did the same move, and as he finished it, he literally lifted my camera up out of the water and then set it back down again. 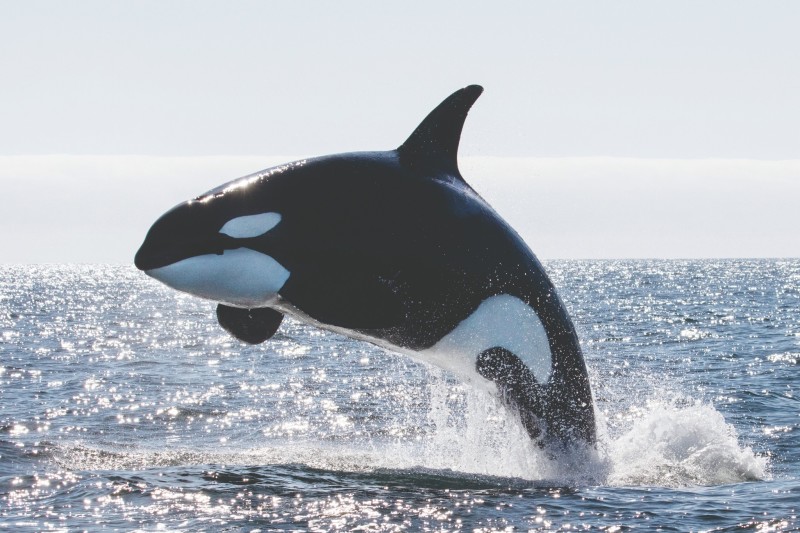 What sorts of insights into whale behavior have you gained by swimming with whales?

Swimming with a mother/calf pair is particularly interesting, because the mother will stay down 15 to 20 minutes before she needs to come up for air, but the calves will come up every three to five minutes. The calves often get curious, and they swim on by the swimmers. Sometimes if we’re lucky, we get to swim with what we call a courting pair or a pair of dancers: two adult whales, usually male/female, but sometimes the males will practice together. Those pairs seem to like to actually engage people. They will come close to us; they may turn on their sides; they may look at us closely. If we have the opportunity, we will try to find a singing whale. They’re always male, and they’re always by themselves in deeper water. The song is so powerful that when you’re in the water with them, it vibrates your chest cavity and actually shakes your bones. We have the opportunity sometimes to see a calf opening its mouth, a mother nursing a calf, whales doing interesting things with bubbles—we don’t know what they’re doing, but one whale might blow bubbles underwater, and then its partner swims through them; I’ve seen a whale create a veil of bubbles by taking her fluke tip through the surface of the water and bringing a swirl of bubbles around her body. It’s always different. 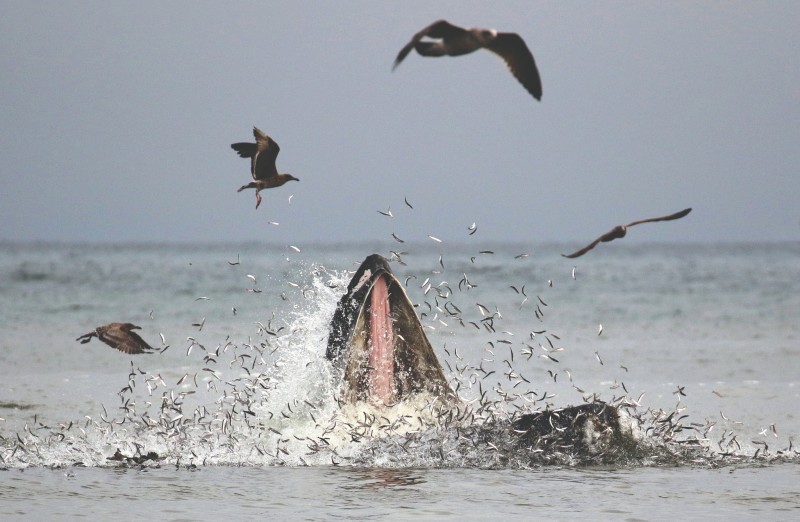 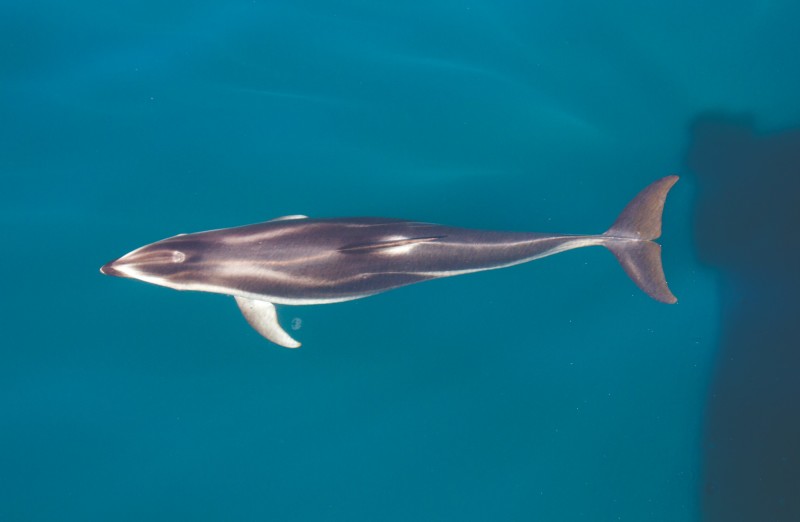