Our Santa Cruz Arts Commission recently approved three storm drain mural designs for installation in neighborhoods along the San Lorenzo River. The program goal is to bring awareness of how these drains flow directly into the San Lorenzo River and subsequently, Monterey Bay. It is intended to inspire care of the drains, the river and the bay through meaningful neighborhood engagement and artwork.

We welcome you to the mural installation on Felker Street which will occur in August. (Stay posted for the rescheduled time and date here.) You will be able to help Artist Daniel Velasquez paint his design on the sidewalk leading to the storm drain. Join Felker Street neighbors, the Coastal Watershed Council and the Arts Commission in this hands-on enjoyable community effort at the end of the block near the Riverwalk. 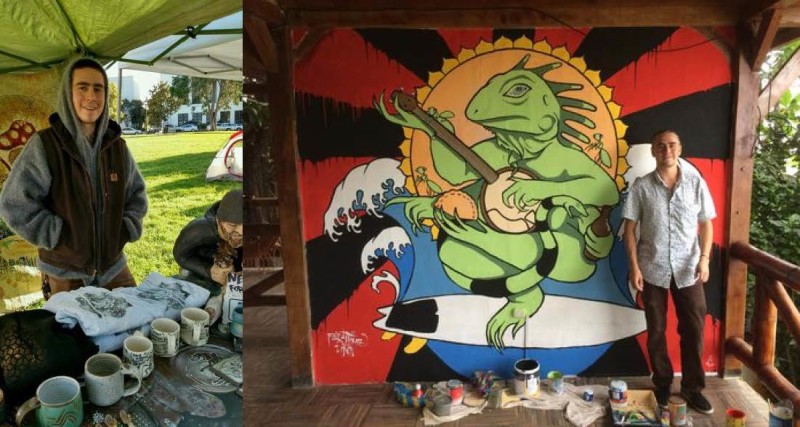 The design will feature flowers and creatures of the San Lorenzo River – including steelhead, cranes, ducks and raccoons. A beach ball is included in the design which ties in a recreational link to beaches and ocean. The artwork is further inspired by totems throughout indigenous cultures. “Eddie” the neighborhood cat will be included by popular demand! Daniel’s design was developed through two neighborhood meetings conducted in both English and Spanish. 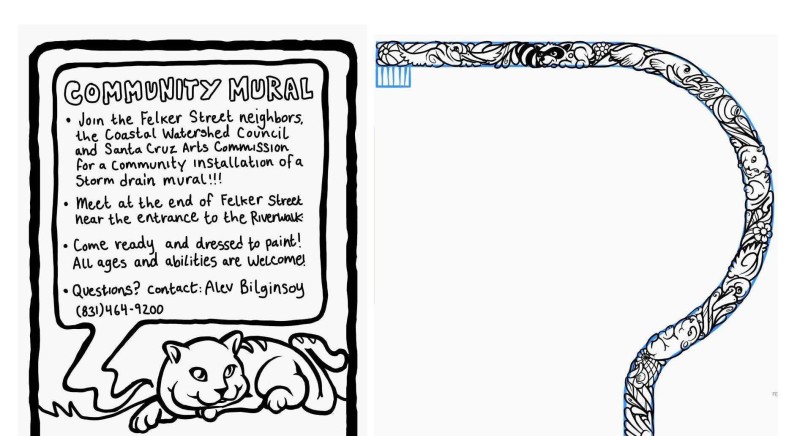 The mural project encourages people of all ages and abilities to help with its installation, creating strong connections among neighbors and an increased sense of stewardship for the storm drain, the San Lorenzo River and Monterey Bay.

In addition to the mural, Daniel wrote a poem that will be placed on a plaque next to the storm drain. It is sure to make you smile!

There once was a boy from Felker St.
He liked to clean and keep his world neat.
But near his— the end of the road—was where he met his defeat.
He saw trash that flowed no one knowed where it goed!
Trash was free flowing who knows where it’s going?
The boy didn’t but he wanted it to stop!
He ran to his home and brought back poem which he left for the world to see.
Now you and me can walk down Felker St. and there’s no trash that flows to the sea.

We hope to see you at the Felker Street storm drain in August!

The mural program is a collaboration between our City of Santa Cruz and the Coastal Watershed Council. It grew out of discussions with the City’s Public Works Department, which had determined that many of the storm drains along the San Lorenzo River are magnets for trash and other pollution. The water going into these drains flows directly into the San Lorenzo River and impacts river health and the creatures living in the San Lorenzo River ecosystem before reaching Monterey Bay.