James Antonelli digs deep in and out of the water 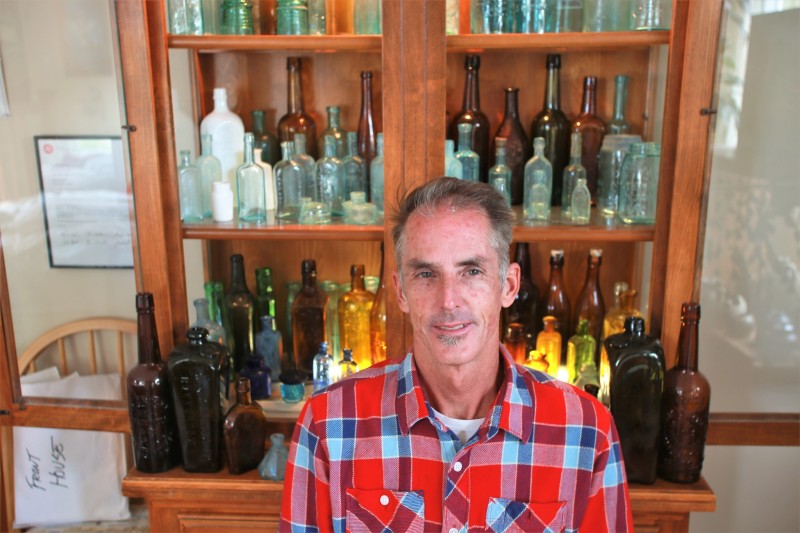 While most surfers will search far and wide for waves, 55-year-old James “the Mayor” Antonelli waits for the waves to come to him.

The fourth-generation local has been doing this for so long that, if a couple of unnamed local breaks aren’t delivering, or a red tide is fouling up the water, he’s got another passion waiting for him: bottle digging. This underground treasure hunt is the practice of unearthing antiquities from long-forgotten outhouse sites—because, before we had recycling and the dump, the easiest way for our predecessors to dispose of spent belongings was to toss them down their outdoor toilet.

As time passed, and outhouse repositories filled up or the property got a makeover, these holes in the earth become legitimate time capsules. Bottle diggers like Antonelli relish the hunt, researching maps and historical resources in the search for well-preserved bottles, jars, marbles, whiskey flasks, smoking pipes, and other detritus left behind by long-gone souls.

It’s fun and exciting work, for the most part—the kind of hobby that whispers to Antonelli when he wakes, and nags at his heart during the doldrums of the day. He’s always ready to dig at a moment’s notice. “In the back of my truck there’s room for my surf repping stuff, but there’s always a pile of ropes, buckets, tarps, saws, clippers … everything,” says Antonelli, who works as a surf rep for Block Surf and Senor Lopez beach blankets.

Antonelli became interested in bottle digging 17 years ago during a particularly fruitful sea-glass season. He had walked from the beach up Moran Lagoon, a tributary that feeds into the ocean just north of Pleasure Point, to poke around. “That’s where I found my first bottle: a ‘Santa Cruz Milk’ bottle,” he remembers. “I was hooked after that. I went back there and started going into creeks, and then, of course, ran into bottle diggers.”

As his bottle-digging community grew, Antonelli learned that a successful dig requires much more than just digging tools. The finders utilize soil-penetrating probes to poke around for a hole. Once a hole has been found, they continue to probe as they dig, ultimately unearthing the item that led them there. “It’s like archaeology, except easier,” laughs Antonelli. “We aren’t using toothbrushes.”

While the thrill of the search is rewarding, the amount of work one puts into obtaining something that is both unique and intact borders on lunacy. In addition to excavation equipment and the ability to use it properly, bottle digging requires relentless detective work. It won’t suffice to simply throw darts at a 19th-century map of Santa Cruz County in order to locate good, sellable finds. Hunters must know where the affluent residents lived, as well as where they pitched their unwanted refuse.

This information is essential to finding the best bottles, Antonelli notes, because, just as today, a resident’s financial resources determined the quality of their purchases. “That guy who had money could go get a high-end bottle, which the guy who was making pennies couldn’t buy,” the digger explains. “For example, at one location downtown, there used to be a doctor who lived there—it says it right there on the map. He had money, and that lot had so many high-end bottles it was crazy!”

As he pulls antiquities from the cache, Antonelli enjoys getting a glimpse into how someone once lived. “You can get into a hole and the top is full of medicine bottles and the bottom is whiskey bottles,” he says. “You’re unearthing a time lapse of someone’s adult life. You could go all the way down, starting at their old-age ailment products such as bottles for balding, liver health, and heart cure, all the way down to the evidence from their hard-drinking party days.” 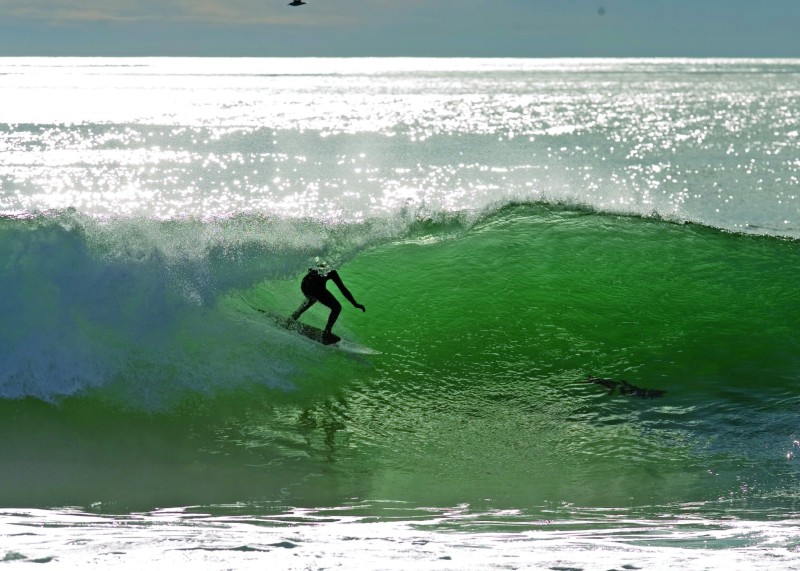 Antonelli sells his valuable finds as soon as he can, with little care for nostalgia or trophies. One of his favorite relics, which he dug up on the Westside, read “Dr. Fong’s Great Chinese Remedy” on one side and “Medicine for the Liver” on the back, written in Chinese. Many of the bottles and glass he uncovers are aqua tinted, while the most valuable color is puce, a dark red or purple-brown hue.

The adrenaline associated with probing around and hitting a payday keeps Antonelli on the scent, scouting and searching endlessly. He studies maps—be they hand-drawn or Google Earth satellite imagery—to identify potential dig sites, spending hours in the sun, toiling in the dirt.

One memorable dig was in Salinas, at a site that had burned down. Antonelli and a few friends were accosted by a man whose sister had once lived there, and who came at them with a 2-by-4. “I just said, ‘We’re digging a hole, how much do you want for it?’ As I dodged the lumber I just asking him over and over,” he says. “Finally, he goes, ‘How much can you pay me?’ I said, ‘I dunno, 40 bucks?’ He took the 40 bucks and left.” 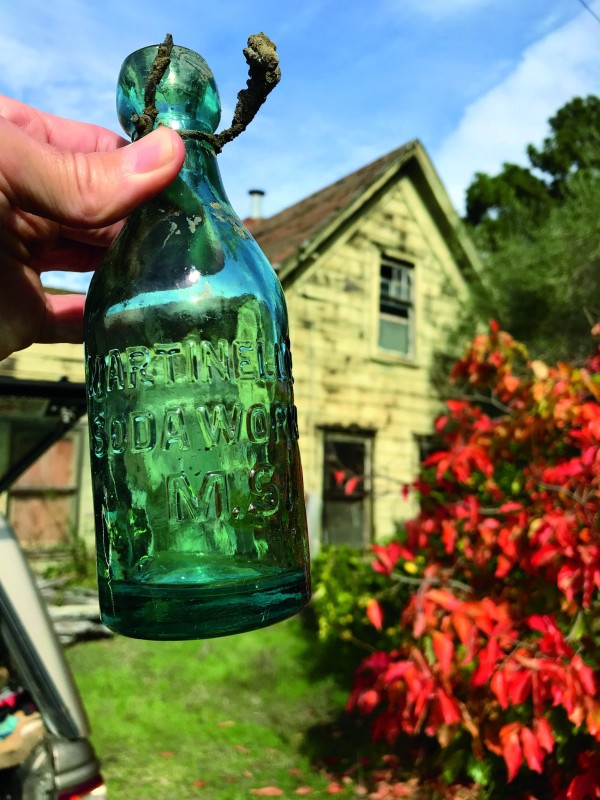 Antonelli admits to having been arrested for trespassing before, but has found that, most of the time, the landowners he approaches legally are accommodating—sometimes even bringing out lemonade. His bottle-digging pastime is quite like his relationship with surfing: he’s got all the tools and skills needed to excel, and his appetite for bigger, deeper, and cleaner scores keeps him coming back for more.

In a mischievous nod to the origins of his hobby, Antonelli reburies the cracked, useless glass he uncovers, so that future generations might find it. “Since I started, I plant glass down during the winter—all old stuff, but ones I couldn’t keep,” he says. “I usually wait for it to get stormy, ideally for a long time, then I plant it down so nature can have its way with it; sanding and polishing it down nicely for future sea glass hunters to collect.”

Follow Antonelli on Instagram @mayor26antonelli. Direct message his account if you have, or know of, a property that is more than 100 years old and is ready for digging.

One comment on “FACES OF SURF | The Modern-Day Treasure Hunter”