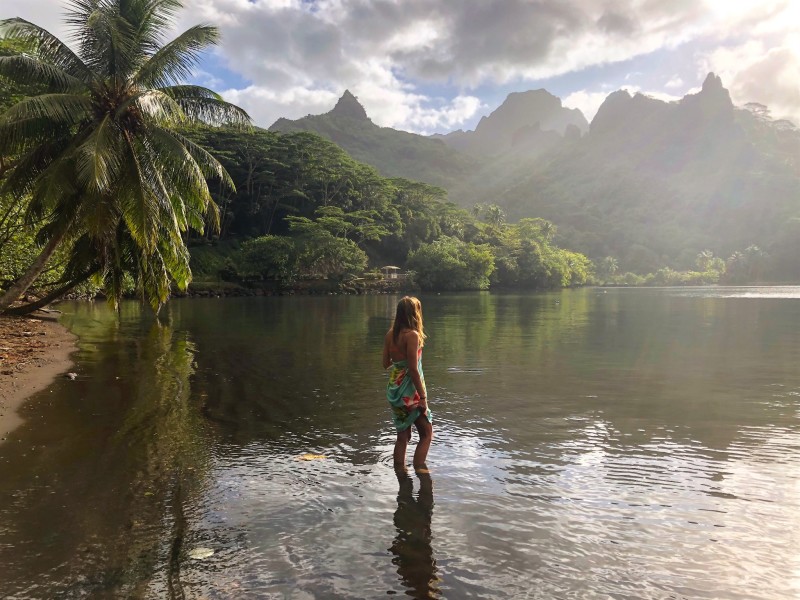 The squall is wailing down upon us now. I gaze out the window of the tropical Tahitian bungalow as palm fronds violently bend and whip in the wind. My girlfriend Paige is completely entrenched in the bestselling novel Beneath a Scarlet Sky, so I arduously put pen to paper, trying to articulate the bantor inside my busy brain.

It’s been two years since my last visit to French Polynesia, and with direct flights now operating out of SFO and no big events in the calendar, we simply couldn’t say no to this tantalizing opportunity. The thought of big blue barrels and bronzing in the warmth of the South Pacific sun were our original motivators, yet after a bit more thought we decided to mix some purpose in with the pleasure. That meant consciously using the least amount of plastic we could, diving into some of the history of the region, and documenting what we saw during our journey. 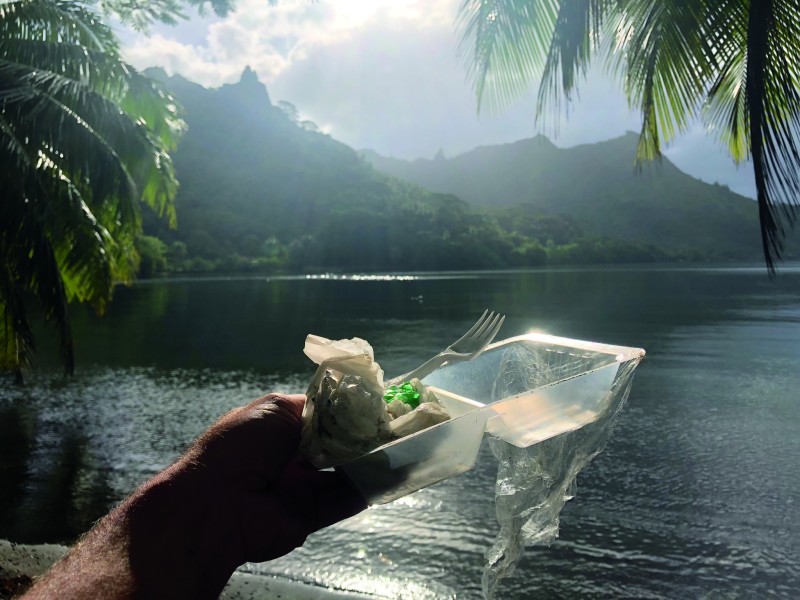 Unfortunately, many travelers suffer from “tourist tunnel vision”—simply following the signs to the bus, hotel, pool, or bar without really noticing what’s going on outside the window. We didn’t want to go about our trip this way, so we did a little digging into the history and culture of the area.

I was shocked to learn that, from 1966 to 1996, the French government carried out more than 193 nuclear tests in the South Pacific—with 41 being atmospheric. France was not the only culprit, however: the United States and Britain also conducted scores of nuclear tests in the region. Our country’s infamous Castle Bravo test, in 1954, detonated a bomb in the Marshall Islands that was 1,000 times more powerful than the one that devastated Hiroshima, causing massive contamination and decimating animals and marine life for miles. Thousands of veterans, families and civilians are still fighting for compensation over health issues relating to exposure from the radioactive fallout. 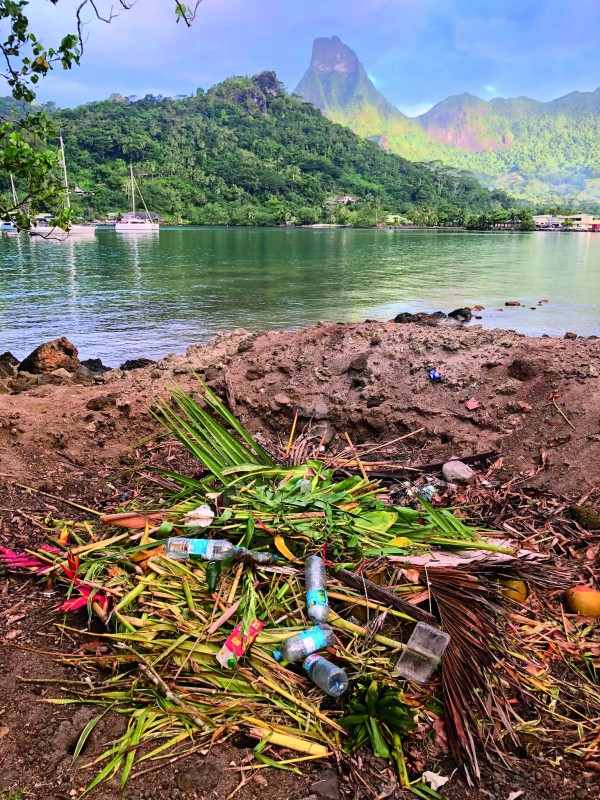 Fast forward to the present day and the inhabitants of these South Pacific islands are now being exposed to a much more sneaky and sinister killer. Western culture has introduced a lethal concoction of industrialization and urbanization, with a hearty topping of convenience. When once these native populations would live off of a healthy diet of fish, plants and coconuts, they now have fast-food joints around every corner and bulk-shopping stores filled to the gills with packaged goods and rows upon rows of sugary sodas. French Polynesia now ranks among the most obese countries in the world. Apart from all the chronic health problems these big-hearted islanders now face, they also have the issue of what to do with all the plastic waste. On a small island with no real infrastructure to handle the garbage, it ends up strewn along the road and beaches, or in a pile waiting to get burned. 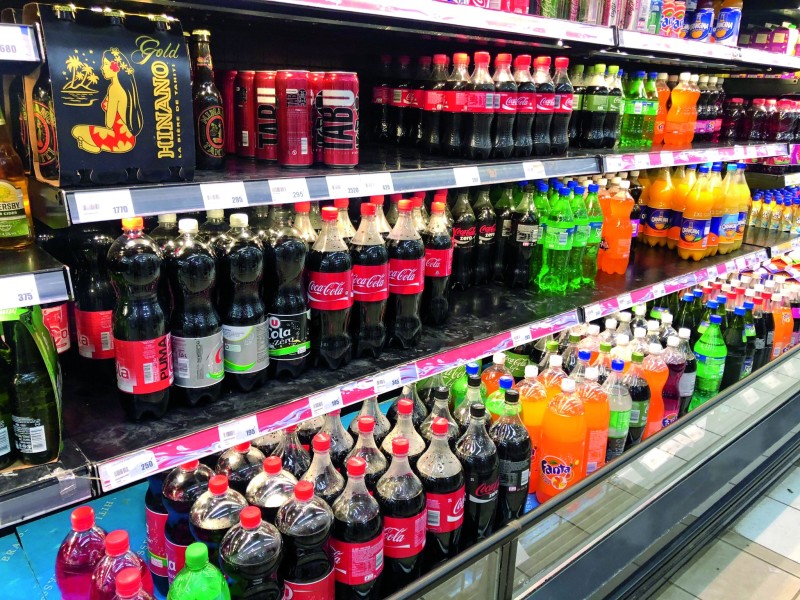 To see this first hand in some of the most picturesque places I’ve ever witnessed was heartbreaking. Sometimes I wished we had just put on the blinders and gone straight into a cocktail-induced coma by the pool. I’m a celebratory drinker, so that option was gone with the warm Tahitian wind.

Despite the fact that my surfboard didn’t touch the ocean due to a lack of swell, we made the most of our week-long jaunt across the Pacific. Sunset kayaking, swimming with rays and sharks, and lunch with new friends all lightened my morose mood about the larger issue at hand. On our very last day I even got to check off a lifelong dream of swimming with a whale. A new Australian buddy named Simon and I spent half an hour frolicking with a lone juvenile humpback who seemed just as curious and excited as we were, coming up out of the deep blue depths to spin and roll on its back like a 20-ton puppy dog. Looking straight into the eye of this majestic creature was something I’ll never forget. The experience was also a wonderful reminder that no matter how fleeting or miniscule our actions for good may be, it will never be energy spent in vain. 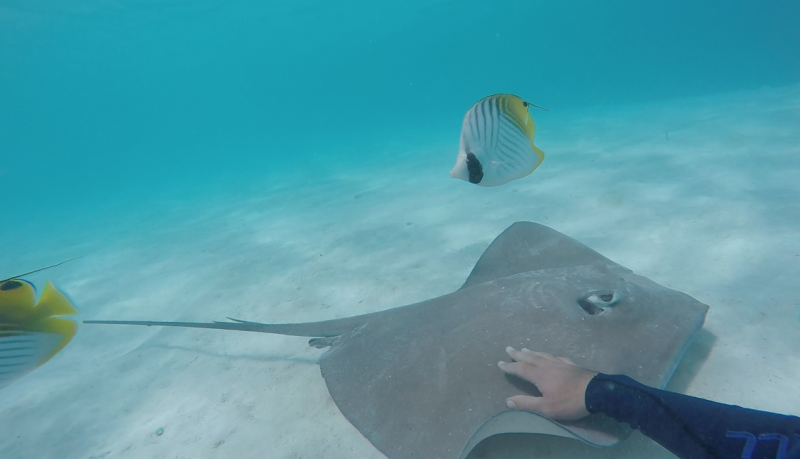