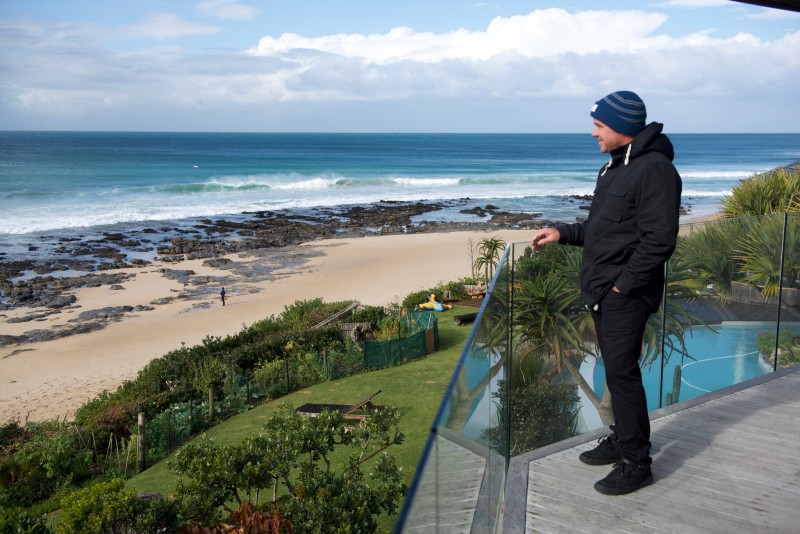 In 1995, one of Santa Cruz’s most successful competitive surfers, Chris “Gally” Gallagher-Stone, became the first Santa Cruz rider to crack what was then known as the “Top 44”: the World Championship Tour (WCT)’s revered annual list of the best surfers on the planet. He graced this prestigious list for three years, from ’95 to ’97.

During his tenure, he cleaned up at breaks around the world, with a second place score at G-Land in Indonesia, a win at Western Australia’s Margaret’s River, and, amazingly, two back-to-back Coldwater Classic wins at home in Santa Cruz. “[I] had some wins, losses and a whole lot of fun causing a ruckus with all the SC boys around the globe, getting sick waves. So fun,” he says. “In the end, all I really wanted out of it was to see the world and not have to work. Competing was a means to an end, and I did a lot better than I ever thought I would.”

But, as he neared 30 years old, the constant travel lost its appeal and surfing began to feel like a job, and he decided to step away from competing.

Over the past 15 years, Gallagher-Stone, who now resides on the North Shore of Oahu, has found a rewarding life after competitive surfing through coaching and shaping surfboards for the sport’s best. 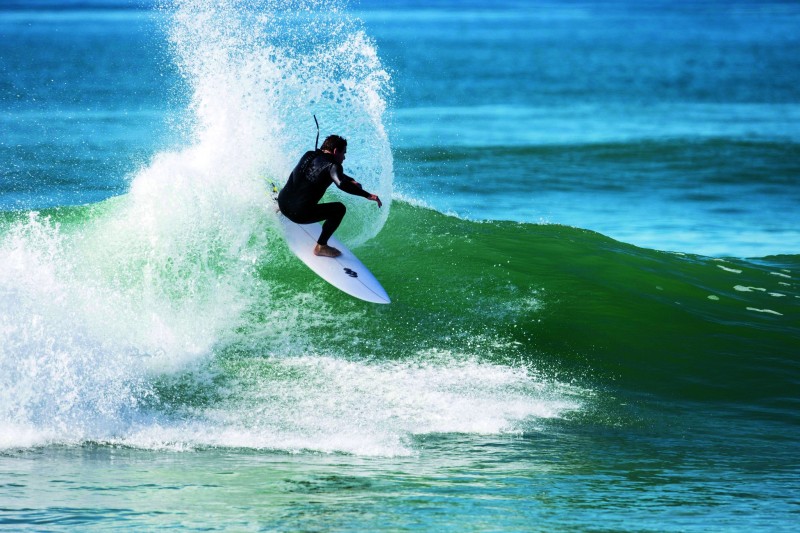 It’s a fitting path for a man who has been studying surf technique and coaching young surfers since he was a teenager. Seth Taylor, one the most polished goofyfooters to come out of Pleasure Point, grew up on 37th Avenue with Gallagher-Stone. Taylor remembers the elder screwfoot’s influence fondly, and can attest to his skill, even in those early days, for analyzing surfing.

“I’ve been watching Chris surf for a long time,” Taylor says. “He was the fastest, most mechanically sound backside surfer I’d ever seen. When he was on tour, he’d come home and need somebody to train with, so we would go find anything to ride, even if it was 2-foot Beaches [in Aptos], and run mock heats. During that time, I was able to pick his brain about technique. All I wanted to do was to surf like Gally.”

Hanging up the contest singlet at the turn of the millennium, Gallagher-Stone turned his focus to surfboard design, a facet of surfing that was precise and detail-oriented—just like good surfing. He began working with NHS, Inc. when they launched Santa Cruz Surfboards, lending insight that helped the brand with their mass-produced epoxy designs as well as custom polyurethane shapes for team riders including Bud Freitas and Austin Smith-Ford.

Then, in 2003, Gallagher-Stone and his wife, Lynsey Gallagher-Stone, bought a home on the North Shore’s Rocky Point, where they are raising their three sons, Bo, 17, Sam, 13, and Koa, 5. “Hawaii is home now, and I don’t regret any minute of it,” he says. “I love how my kids are turning out from the culture and family values that differ from the mainland in ways that I like. I will always think fondly of growing up in [Santa Cruz], but I love Hawaii and am here to stay.”

Gallagher-Stone’s inner surf nerd flourished after arriving on the island. Once there, he glommed onto master shaper Eric Arakawa, whom he had been sponsored by during his days on tour. “I went full karate kid on him,” Gallagher-Stone remembers. “I hung out at the factory, cleaned up, helped build stuff—basically bugged him until he hired me to ‘ghost’ shape for him. I did this for three and a half years: doing eight boards a day and [learning] how to shape and design for real.”

Along with shaping, Gallagher-Stone began using his competitive know-how to coach other aspiring pros. In 2008, goofyfoot wonder-twins CJ and Damien Hobgood were on the WCT and sought to change some things up to gain an extra edge on their opponents. They employed Gallagher-Stone to help them on tour with coaching and as a board shaper. “He was so honest,”, remembers CJ, who refers to Gallagher-Stone as a “technique wizard.” “He always saw through the smoke and mirrors and called it how it was. I loved that.”

After working with the Hobgoods for several years, as well as other tour standouts such as Taylor Knox and Josh Kerr, Gally was approached in 2016 by 29-year-old Jordy Smith, one of the sport’s greatest talents. Although reaching the elite WCT and being in contention for several world title races, Smith has never realized his dream of being world champ. Critics have previously found issue with Smith’s backside surfing, so who better to turn to then the backside master himself?

“We looked at some technique stuff and just tried to make up the little percentage points in all areas,” Smith says. “Regardless of the ups and downs of this sport, if the athlete and the coach believe in the process and stay the course, the results will come.”

And come they have. Their first year together, Smith placed as runner-up on the final rankings, and backed it up in 2017 with another impressive fourth place finish. Currently ranked fifth, with two events remaining on the docket for the 2018 season at the time of this writing, Smith is looking at another strong finish. 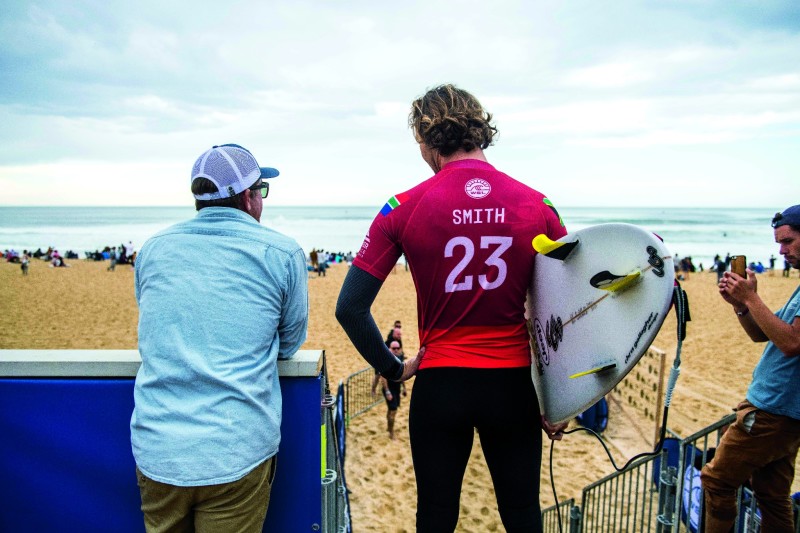 The pair also worked on a board design that complements Gallagher-Stone’s coaching. Even though Smith could ride any board from any shaper in the world, he has chosen to ride his coach’s boards during events. “To see one of the best surfers in history dismantle the ocean on one of my boards is pretty cool—[and] in an event, even cooler,” the teacher reflects.

With surfing added to the 2020 Summer Olympics in Japan, it’s no surprise that Gallagher-Stone has been called on to lead the very first U.S. Olympic surf team. Given the position of “elite performance and technical coach,” he’s looking forward to working with the country’s top surfers and is in the process of developing the ideal protocol and set up to train this new breed of oceanic Olympians.

“I am super excited and honored to be a part of this and feel very fortunate and humbled to be chosen,” he says, later adding, “Looking forward I am going to keep focusing on my family, coaching and shaping. I want to stay home a bit more, so [I’ll] probably fade out of coaching full time on the tour and look to the Olympics and digging into some new ideas I have for my board business.”

And between these many endeavors, of course, he plans “on surfing whenever possible.”