Hundreds of tons of radioactive waste is stored at the shuttered San Onofre Power Plant, just 40 yards from the Pacific Ocean and some of California’s most prized surf spots. What will the energy industry do with this huge quantity of deadly, eon-lasting, spent fuel? 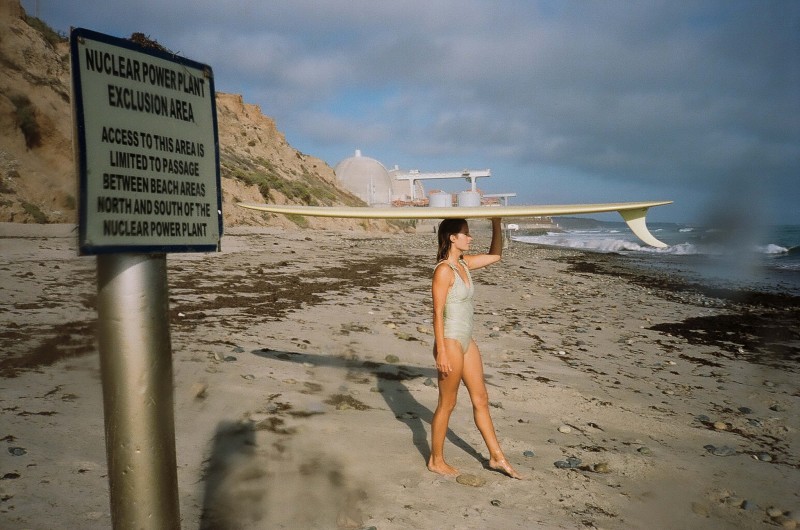 Sarah Brady, a 21-year-old Encinitas native, learned to surf on the world-class waves that peak and curl in front of San Onofre State Beach. and she grew up more or less accepting the massive, now-shuttered nuclear facility that straddles the surf break’s coastline as a simple matter of fact.

A stretch of tsunami-resistant buttressing spans the length of the power plant along the beach, bookended by Old Man’s surf spot on one side and Trails on the other. Rising from a tangle of cranes and structures are its two massive, dome-shaped reactors—known for resembling a mountainous bosom, clearly visible from both the sea and the highway, facing stonily into the sky.

“When you’re down on the water, you’re looking up at the facility,” says Brady. “From the ocean it’s a clear view—it’s definitely an interesting landscape.”

The beach is 25 minutes from her family’s home, and she says driving there gives her a sense of going back in time—the mostly rural landscape; bumping down a dirt road.

It wasn’t until last year that Brady took a new interest in the San Onofre Nuclear Generating Station, specifically the status of more than 1,600 metric tons of radioactive, extremely lethal spent fuel currently stored at the site, much of it precariously close to the ocean.

Brady, who studies cognitive science and sustainability at UC Santa Cruz, took a class on environmental policy with recently retired program director (Environmental and Nuclear Policy) Dan Hirsch, whose specialty is nuclear safety. Through Hirsch, Brady learned about the predicaments with generating massive amounts of nuclear waste, the federal government’s inability thus far to establish a permanent, safe repository, and future plans for the highly-volatile spent fuel that is stored at San Onofre. After the class, Brady decided to dig deeper. 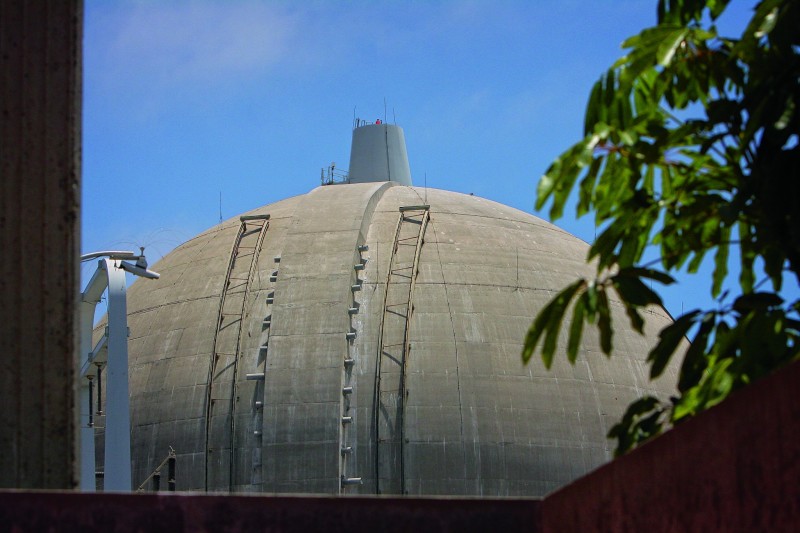 “It was hard for me not to wonder what was going on there,” she says. “And now they’re storing the waste right there in the bluff as an interim method. … It’s my home break, there’s still so much beauty happening there, but learning about the nuclear waste has opened my eyes to a lot of the complexities of this industry.”

The San Onofre Nuclear Generating Station, which began operating in 1968 and is majority-owned by Southern California Edison, came under the national spotlight in 2012 when two freshly replaced steam generators malfunctioned, releasing radioactive steam into the atmosphere. This incident came less than a year after the Fukushima Daiichi nuclear disaster, leaving many Southern California residents fearful that something similar could occur on their own coastline.

Hirsch, who lives in the Santa Cruz Mountains, has tracked the San Onofre plant and Southern California Edison for decades. He says that when the steam generator fiasco unfolded (it was a critical factor in the plant’s 2013 shutdown), Southern California Edison was elusive about the extent of the damage and also cut political corners when authorizing the installations.

According to Hirsch, the whole disaster could have been easily avoided. Hirsch, allied with former Sen. Barbara Boxer, testified before the Nuclear Regulatory Commission (NRC), helping to uncover the extent of the 2012 incident’s impact, and played a subsequent role in an Atomic Safety and Licensing board blocking Southern California Edison’s attempt to restart following the accident.

“They dodged public hearings through technicalities, and within about a year, the steam generators began to fail,” Hirsch says. “The facility itself was always deeply questionable—right near earthquake faults and producing high-level radioactive waste, which has no safe method of disposal. Fifty years of power; 500,000 years of waste. We get the power, and future generations are left with the mess. The material is dangerous for immense periods of time. It has to be isolated from the human environment and we have no idea how to actually do that.” 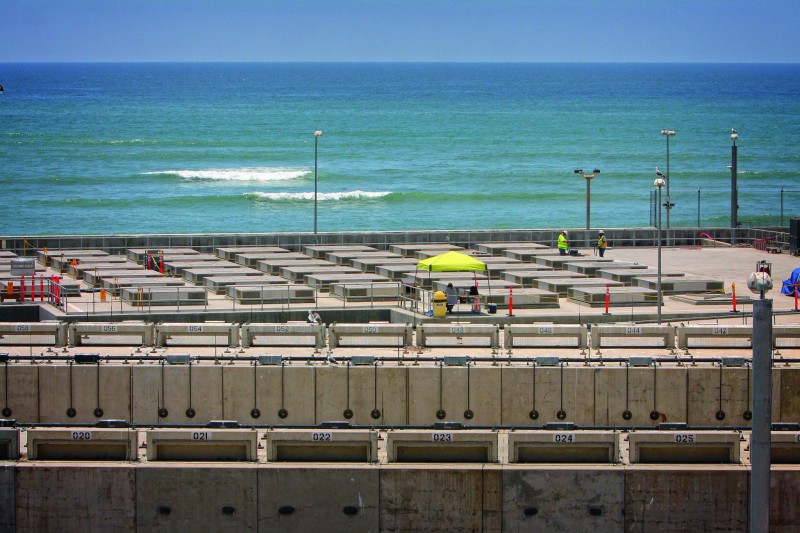 In 2015, the California Coastal Commission permitted Edison to build “dry-cask storage” bunkers on the power plant site, situated about 125 feet from the ocean on the bluffs.

The permit caused an uproar among Southern California residents over safety concerns and provoked a lawsuit from an environmental group called Citizens Oversight. Hirsch explains that, while moving the nuclear waste from its current storage system—immersion in cooled-water pools, which is standard for active power plants—into the dry-cask storage is safer, placement near the water is unfathomable.

“It’s hard to come up with a worse idea than what they’re doing—burying the fuel on the beach, a short distance from the ocean—it’s just incomprehensible,” he says. “With sea level rise, the ocean can inundate the fuel. Secondly, it would be easy for terrorists to attack it by sea. And being right by a public park, it’s almost impossible to protect.”

If the U.S. Department of Energy’s original plans had unfolded the way they had hoped, the United States would have a permanent, geologically-safe repository where all of this radioactive sludge could be sent and contained for millenniums—the amount of time much of this spent fuel requires to chill out and stop being so deadly.

So, Edison’s work to safely transfer the spent fuel into dry-cask storage is, essentially, the result of the Department of Energy defaulting on a 20-year-old requirement to establish a national, high-level waste dumping ground.

Maureen Brown, a senior project manager and media relations specialist for Edison, rebukes the notion that the San Onofre plant’s transition to dry casks near the bluffs is unsafe, citing the facility’s structural integrity, capacity to remain functional in the event of a major earthquake, and the high-tech dry-cask system, which is designed by a company called Holtec.

“Transparency is an important part of our commitment as we proceed with both safely managing the used fuel and making preparations to dismantle the plant,” she says.

Hirsch says that a reactor produces about one ton of plutonium every three to four years, and it would take “several pounds of the stuff to level a city. An ounce will kill you.”

There was an initiative that began in the ’80s to turn Nevada’s Yucca Mountain into a permanent repository, but the plan was nixed in 2010 due to safety concerns. It’s not a great option, however the House of Representative passed a $145 billion spending bill in June that includes $267 million to revive Yucca Mountain as a nuclear waste site.

With political pressures to relocate nuclear waste housed in precarious locations, such as the San Onofre site, two new sites are being vetted as high-level waste, “consolidated” interim storage plants—one at the low-level Waste Isolation Pilot Plant in Carlsbad, New Mexico, and the other in a rural part of Western Texas—though the interim options have not passed the senate. The interim aspect means that when an official permanent repository is established, the waste would once again be moved.

In lieu of the permanent site, Edison strongly supports transferring San Onofre’s waste to out-of-state, consolidated, interim storage. “The one area of alignment seems to be that everyone would like to find a solution that would allow for offsite storage,” Brown says.

However, some experts have both ethical and practical concerns with relocating the used fuel.

“The transport from A to B has major dangers associated with it—every mile you travel magnifies that danger,” says Rick Wayman, the director of programs and operations at the Nuclear Age Peace Foundation in Santa Barbara. “Another is that the communities where these consolidated storage sites are located are poor communities of color, and they don’t have economic opportunities to speak of. … This is being pitched as a short term way to economically revitalize these communities, bringing money and jobs to manage the waste, but maybe not explaining the dangers.”

Instead of transporting the nuclear waste from San Onofre to New Mexico or Texas, Hirsch advocates for a third option: moving the radioactive spent fuel just across the coastal Interstate 5 highway to a site at the Marine Corps Base Camp Pendleton. The power plant’s real estate is already leased by Edison from the military, meaning this transfer keeps it technically on the same property.

“It’s not visible from the highway or the beach, no line of site if there were a terrorist aiming a rocket-propelled grenade, it’s protected by the marines, and it would involve minimal transport,” Hirsch says.

“It’s not a great solution, … but the point is, it’s our responsibility to choose the least bad solution,” he adds. “There’s a substantial human tendency to want to dump it on someone else. The question is, can we educate people to take a position that doesn’t potentially harm others? It’s a bad situation but we shouldn’t make it worse.”

Wayman agrees that the Pendleton proposal is the “best of the worst options.” “That would at least get it away from the coastal tsunami line, which would be a big relief,” he says.

Brady, who is transferring to UC San Diego in the fall, plans to collaborate with Hirsch and another student to draft an academic paper on the issue, and intends to advocate in Southern California for relocating the waste to Pendleton.

“Whether or not a national repository comes around, I don’t believe we should be investing in nuclear power and creating this waste anymore,” she says. “We’ve never known what to do with it and there’s no good way to manage it.”