Sometime in the wee hours of August 18, 1961, thousands of migrating sooty shearwater sea birds diverted from their normal flight path. After foraging on a bad batch of anchovies off the coast of Rio Del Mar, the flock wasn’t feeling so well, and needed to shore.

To their detriment, a thick fog had settled, and the nearest landmark to steer toward was the lights of Capitola. When they arrived there around 3:30 a.m., it became clear that the anchovies had caused more than just indigestion. 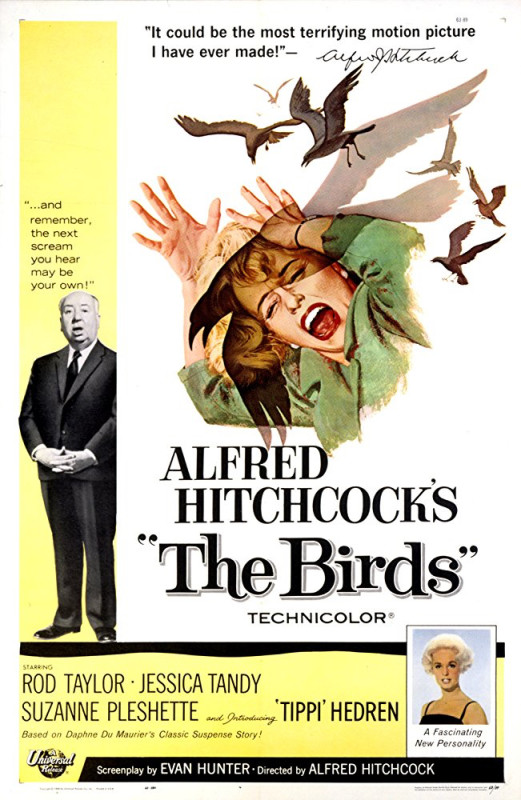 Capitola residents and visitors reported that they heard smashing and crashing—thuds on their roofs. Awoken by the cacophony, some stepped out of their homes, armed with flashlights, only to find that the birds flew straight toward them.

“One woman in Opal Cliffs opened the door and about six birds wanted to come in her house,” says Frank Perry, curator of the Capitola Historical Museum.

The owner of the Venetian Court Motel at the time, Edna Messini, who was bitten by a sooty sheerwater during the frenzy, said she heard the sea birds crying like babies, and that, “They slammed against buildings, regurgitated fish, and knocked themselves out.”

In the morning, yards and streets were blanketed with avian corpses and half-digested anchovies. Birds that survived the night lacked the strength to take flight. They huddled under cars and in alleys, and hid from felines, attracted to the pungent aroma that permeated the air. Concerned citizens worked to gather the surviving birds and bring them back to the ocean where they were reported to regain their liveliness.

“Truckloads of dead birds were hauled away. Altogether, there were several thousand birds,” says Perry. “Public works and various sanitation departments sent guys out to collect the dead birds, many of which were run over in the streets. It was a mess.”

Locals were baffled. Dead birds were found all along the Monterey Bay, but most were concentrated in Capitola and Opal Cliffs. Experts at the time speculated that the dense fog had caused the sick birds to crash-land in Capitola, but the true source of the frenzy remained a mystery.

The perplexing incident caught the attention of auteur and part-time Scotts Valley resident, Alfred Hitchcock. The episode had made national news, and the legendary director asked the editors of the Santa Cruz Sentinel to send him a copy of their news article. Hitchcock was in Hollywood during the incident, working on his follow-up to “Psycho,” a film adaptation of a novelette called, “The Birds,” which featured flocks of murderous fowl.

“Hitchcock was very famous at the time,” says Perry. “Not only had he made movies for decades, he also had a weekly television program, ‘Alfred Hitchcock Presents,’ and a murder mystery magazine.” 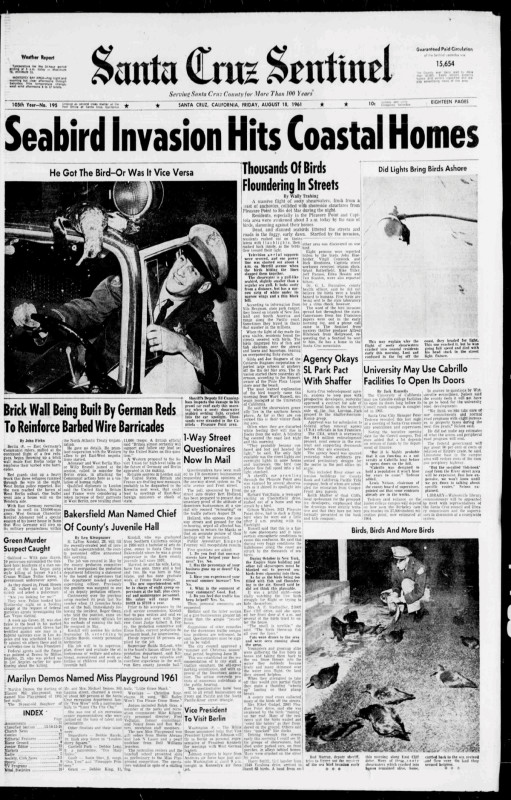 Then, and now, many locals believe that the 1961 incident served as the inspiration for Hitchcock’s 1963 film, but it was actually based on the 1952 work of fiction of the same name by English author, Daphne du Maurie.

“Hitchcock changed things around of course, as they often do for movies, but the basic story is du Maurier’s,” says Perry. “The Capitola incident did get a line in the movie, which gave credibility to this fictional story of birds gathering in huge numbers and attacking people. It planted the idea in the viewer’s mind that it could really happen.”

More than three decades later, in 1991, a massive sea bird die-off occurred in the Monterey Bay. The culprit was a toxic algae bloom. Scientists speculated that the motive behind the 1961 occurrence in Capitola wasn’t fog or a disdain for humanity, but something similar.

In 2012, with this in mind, a team of scientists studied zooplankton from the Monterey Bay that The Scripps Institute for Oceanography had collected in the summer of 1961, and stored. They soon found the source of the sooty shearwaters’ spastic actions, a neurotoxin called domoic acid, which had moved up the food chain from algae to anchovy to sooty shearwater.

Nothing quite like the sooty shearwater invasion of 1961 has struck Capitola since, and although the movie wasn’t based solely on the incident, it is still quite strange that the film’s production occurred at the same moment in history.

“The timing was perfect,” says Perry. “Hitchcock hired the screenwriter in August and started to film in September 1961. As Hitchcock said in the Sentinel, it was, ‘merely a coincidence.’ The only way it could have been a better coincidence for him is if the Capitola incident happened just when the movie was released. That would’ve really boosted ticket sales.”