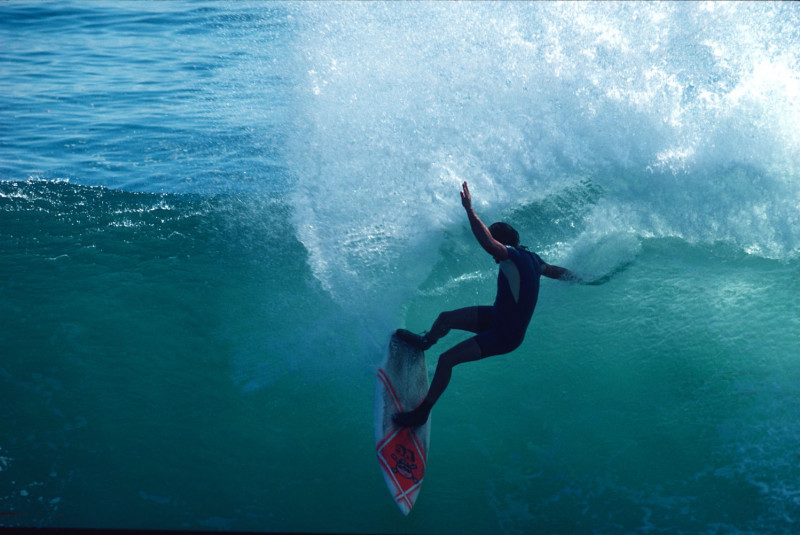 Westside enforcer, Mavericks pioneer, Godfather, bully-bro, beer-drinker and hellraiser…  Father of two, rescuer, rescuee, heart of a whale and one of the few humans who could out-bellow an elephant seal – Santa Cruz stalwart Vince Collier died of a heart attack in Mexico in early March at the age of 57.

Word of Collier’s death spread around the Internet and the reaction was mixed, with some commenters proclaiming Vince as an Angel, while others calling him a Devil. Vince was both, depending on which side of him you were on – good or bad – or which era you knew him.

Whatever the case may have been there was no denying Vince was the godfather of the Santa Cruz Surf Scene and help shaped the way it is today.

TOM POWERS ON THE COLLIER FAMILY

I knew most of Vince’s family, his Mom & Dad, Ann & Bill, his sisters, from oldest to youngest, Connie, Renie, Katie (was married to George Harper) and Rita.   He had an older brother Mike, and I think there was another older brother Joe who I had never met.

Vince’s parents were the nicest people imaginable.   Bill was a mentor to me when I returned to school to pursue a business degree in the early 80’s.   He was the Western US Sales Manager for a big East Coast Pharmaceutical Company and would give me great advice and encouragement.

I used to go pick him up at his parent’s house on Santa Cruz Street.   His bedroom was at the back of the house accessed by the alley. I would tap on the glass slider at the crack of dawn and we would head North, usually Scotts, Waterfalls or Horseshoes.   There was no better motivation to charge hard than the peer pressure of Vince screaming “GO YOU LITTLE WOOSIE!!!” as he’s paddling out and you have a thick 8 to 10 foot wave rearing up behind you that you would normally want no part of.

Without a doubt I know he was a big factor in helping me push the limits of my comfort level in big waves, whether it was Swift Street, Scotts, Ocean Beach, Moss or Puerto Escondido.

Vince was super fun to hang out with, with his quick wit and ability to deliver super-funny one liners at will, on the fly.

For me, I think his biggest accomplishments in surfing were his performance in huge waves at Bells Beach, Australia in the early 80s, charging Puerto Escondido and (of course) being an early Mavericks surfer.

Vince Collier was 220+ lbs of pure power. In the water (and on land) you wanted to get the hell out of his way, always. VC pioneered big Maverick’s, ‘70s Puerto Escondido, charged macking Waimea Bay, big Sunset Beach, big days in Santa Cruz and Northern California. His surfing style was aggressive, smooth, fearless and always powerful.

He was also quick, Irish tempered, volatile and skilled in fighting. He’d knock someone out without even blinking. A notorious West Side Santa Cruz enforcer known as ‘The Godfather.’ He did have a good side, and stuck up for his friends always. V.C. had the quickest, most hilariously sarcastic sense of humor that was heard often, and loudly from the parking lot across from the stairs at Steamer Lane, where he held court daily. RIP amigo.

FLEA VIROSTKO ON PAVING THE WAY

“VC paved the way for the Santa Cruz boys, leading the charge to Maverick’s in the late 80s and early 90s. Thank you for that, Vince. The huge heart he had every day for all of us kids on the Westside was rad. The king had our back in the water. If I needed a board he would make one for me in one day. I got the pleasure of hanging with VC recently and he was happy and having fun surfing and fishing. Say hi to Barney buddy. Love you. Flea.” 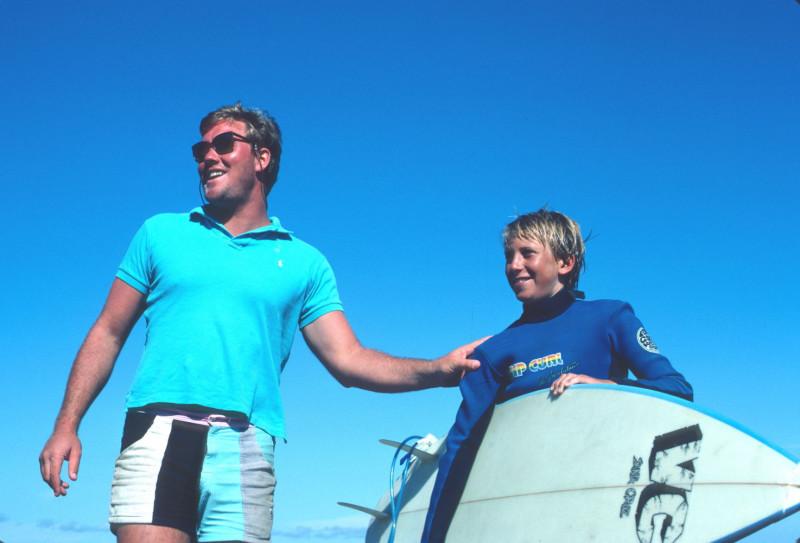 NANCY MORELLI ON LOVE AND MARRIAGE

We were married in ’89 – and it lasted 11 years. We have two daughters, Lael  and Maile. Maile lives here in NorCal with me. Lael was travelling with Vince and Denise in Mex when he died. Most of the crazy stories that are coming out are at least partially true, but any of the Westside Boys will agree with me that he was very loyal to the people he loved. He had a big heart and was a very emotional man (in good and bad ways!).

We had a place on Dufour St. on the Westside with a huge yard and his shaping/glassing room in back. Every day our yard was filled with locals checking on the progress of a board, bringing us fish they’d caught, repairing dings or just hanging out. Always welcome. That was such a good time in our lives….

Really miss Vince’s sincerity, opinions and raw talent. I knew him well and wasn’t always in agreement with his desires and choices. But he did have an “excitement, a draw, a magnetic personality, a good point, a lust for life on a lot of things and people! I saw him thru the best and worst. The true test of what life can throw at you! He made amends to a lot of folks and was sorry for some of his pains and actions towards them at the end. He knew a lot of people internationally and they knew him! When I traveled to other places around the world to surf and said I was from Santa Cruz. His name always came up! “Do you know Vince Collier? Yea, he’s my brother in law!”

There will be a memorial paddle out at The Lane at 10am Saturday April, 7th celebrating his life and legacy.