Beginning in September 2017, county residents who visited the Buena Vista Landfill near Manresa State Beach were surprised to learn the landfill was no longer recycling most plastic waste. If the load they brought to the dump contained plastic detergent or motor oil containers, shopping bags, yogurt containers, styrofoam or any other recyclable plastics numbered two to seven, residents like Kate Nakfor were instructed to pay to dump it in the landfill.

“I was furious,” says Nakfor, who estimates a quarter of her recyclables are plastic. “I was told ‘We send our plastic to China to recycle and they are no longer interested.’ The landfill employees said it was purely a case of supply and demand.”

The global plastic industry is changing fast, and demand for recyclable plastic is plummeting. In 2016, China imported 7.3 million tons of plastic waste, which amounted to more than half of the plastic waste produced worldwide. The majority of this recyclable plastic was from the United States, where for years plastic was shipped overseas to be recycled, turning trash into one of the nation’s biggest exports. In a July 2017 filing with the World Trade Organization, China declared its intent to ban 24 types of solid waste imports “to protect China’s environmental interests and people’s health.” The ban on foreign waste took effect on Jan. 1, 2018. 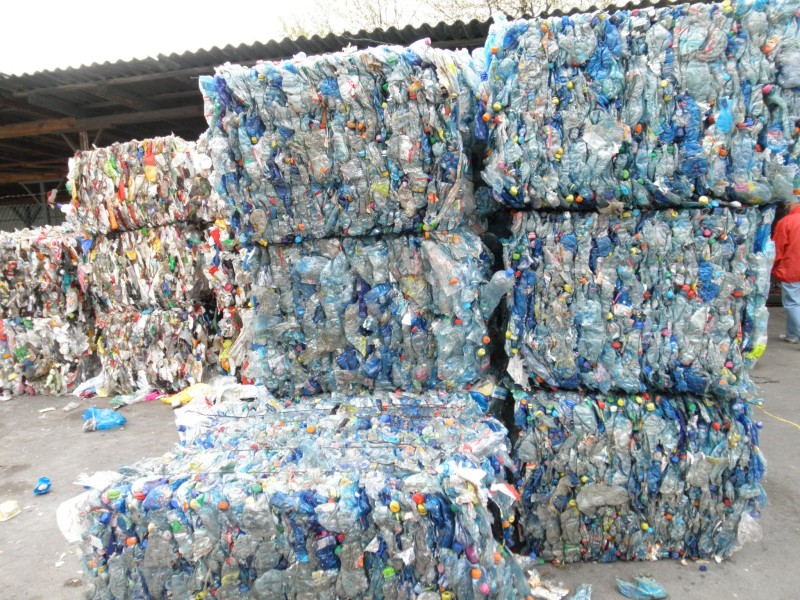 China’s new anti-foreign waste policy has left local waste management operations scrambling to adapt. As sorting facilities search for new markets for recyclables, plastic is piling up in large warehouses at California ports or getting buried in local landfills.

“We are all being dramatically impacted by what’s going on in China,” says Tim Goncharoff, Recycling and Solid Waste Resource Planner for Santa Cruz County. “Everyone is struggling to figure out how to adjust.”

China’s policy shift is part of a larger global movement that has seen developing countries like China and India take the lead on climate change as the U.S. pulls back, implementing aggressive regulations aimed at reducing their reliance on fossil fuels.

But whether China’s new policy actually has a positive impact on the environment remains to be seen, as chemical companies and virgin plastics manufacturers are benefiting on all sides and Chinese recycling companies are shifting operations to other developing nations around Southeast Asia.

“It’s ironic that even though a lot of the plastics China is turning away are coming from the United States, almost all of the virgin plastics China is now buying instead are being manufactured in the U.S.,” says Goncharoff. “The United States is dominating the global natural gas market, and therefore the virgin plastics market, thanks to the tremendous amount of fracking going on here.”

China’s recent disruption of the global plastics economy has shifted the responsibility for plastic recycling—and the search for solutions—back onto local waste facilities and the state of California.

Not far from Wilder Ranch State Park, at the City of Santa Cruz Resource Recovery Facility, a tractor pushes a house-sized pile of mixed recyclables toward a giant conveyer belt. The belt scoops up miscellaneous plastic and paper waste and sucks it into a huge blue sorting machine.

The Dimeo Lane facility is one of several local landfills where employees like Craig Pearson, superintendent of resource recovery, are leading the search for plastic recycling solutions.

Pearson bends down and quickly gathers an armful of plastic wrappers and flimsy packaging.

“Look,” says Pearson, holding out his pile. “None of this stuff is actually recyclable. It’s all going to end up in the landfill.”

According to Pearson, debunking the myth of recycling—that everything placed in residential recycling bins is actually recycled—is an important step towards changing our relationship to plastic waste.

“Buy in bulk, use reusable bags and water bottles, reduce your consumption of single use plastics,” Pearson says. “If it’s got plastic, the best way to make sure it doesn’t end up in the landfill is don’t buy it in the first place.”

But reducing plastic waste takes more than change at the individual level. In addition to public education about recycling, Pearson believes local regulations—such as banning single-use plastic bags and requiring restaurants to use compostable to-go packaging—can make a difference.

At the state level, legislation requiring manufacturers to use recycled plastic in new products is creating an emerging market for plastic waste.

California has set a target to divert 75 percent of all waste from state landfills by 2020, which gives the Buena Vista Landfill a little less than two years to solve the issue of what to do with Santa Cruz County’s plastic waste.

Plastic recycling is expected to return to the landfill by the end of February, but mixed plastics will no longer be accepted and the service will not be free.

Recyclables placed in residential bins continue to be transported to nearby material recovery facilities, where overseas buyers may be found for some higher value recyclables. The remaining plastic waste is in storage, awaiting market changes, or getting buried in nearby landfills. Santa Cruz County’s contracted service, GreenWaste, did not respond to inquiries about how the company was recycling plastic since the ban had taken effect.

“Recycling is a very expensive operation,” says Lisa Fusco, scalehouse supervisor at the Buena Vista Landfill, explaining that the changes in the global plastics market are shifting the true cost of recycling back to the public. She adds, “It wasn’t an easy choice to bury this plastic, but there’s just no place to store it until the situation changes.”

2 comments on “Santa Cruz has a plastic problem, and we’re not alone”