Foil-boards allow surfers to race along on previously unrideable waves.  So how the hell do they work, and where will they go next? 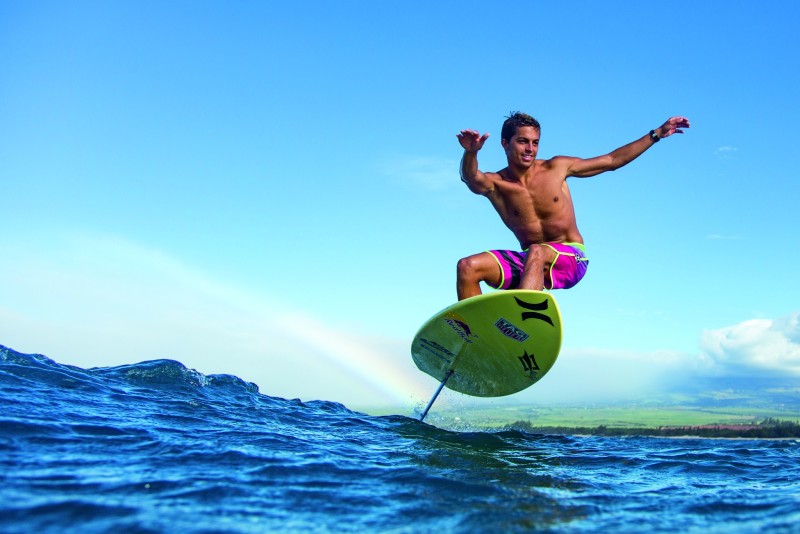 Kai Lenny rips across an open-ocean swell outside of his hometown of Paia in Maui. Photo: Franck Berthuout

On a pleasant day last fall, although the water is still warm by Santa Cruz standards, I walk down to the beach in my thickest wetsuit with a hood and booties—a get-up I normally reserve for only the coldest days of the year. I’m not using the extra rubber for warmth: It’s a safety precaution.

I am about to try foil-boarding for the first time, and my theory is that if the board flips and the carbon-fiber blade cracks me in the head, the cut won’t go as deep. Two accomplished surfers accompany me: fellow rookie foiler Kyle Buthman, who is sponsored by Quiksilver and has been surfing since he was a toddler, and Santa Cruz Waves founder Tyler Fox, who makes it to the finals of the Mavericks competition most years and has ridden a foil on a number of occasions.

The wave that we are about to surf breaks roughly 200-yards off of a popular beach on the Westside. The swells approach from deep water and hit a shallow reef, causing a wave to break momentarily. The reef then drops into deep water, the wave fizzles out, and all that remains is an un-breaking open-ocean swell. It is a horrible wave.

As the first meager wave hits the reef and crumbles, Buthman catches the whitewater and stands up—a simple task that he has performed thousands of times on a regular surfboard. Moments after he pops to his feet, however, the board levitates 2 feet out of the water, leaving only a small airplane-shaped wing in the water. It accelerates like a rocket down the face and launches Buthman onto his back.

Fox catches the next wave. As he stands and the board lifts, he crouches and centers his weight. The wave fades. Normally this is where a surfer’s ride ends, but Fox continues to accelerate to a velocity I have never seen reached on such a small wave.

When it’s my turn, I don’t even make it to my feet. As soon as the whitewater catches my back, the board abruptly lifts out of the water and, like a ship free-falling over the back of a wave, I come crashing down. The sharp wing tip narrowly misses me. For a fleeting moment as the board rises, though, I feel weightless. I’m hooked.

A Sport is Born

Picture yourself in an airplane waiting to take off. Seat belts are fastened and you’re still texting even though the flight attendant warned you to turn off your cell phone. When the pilot hits the accelerator, your head is forced to the back of your seat and you look out the window to see the airplane wing slice through air. What you do not see is that the foiled shape of the wing is deflecting the flow of air downward, creating more pressure on the bottom of the wing and less pressure on the top. At a certain velocity, this pressure difference becomes so great that it creates lift and the plane takes off. 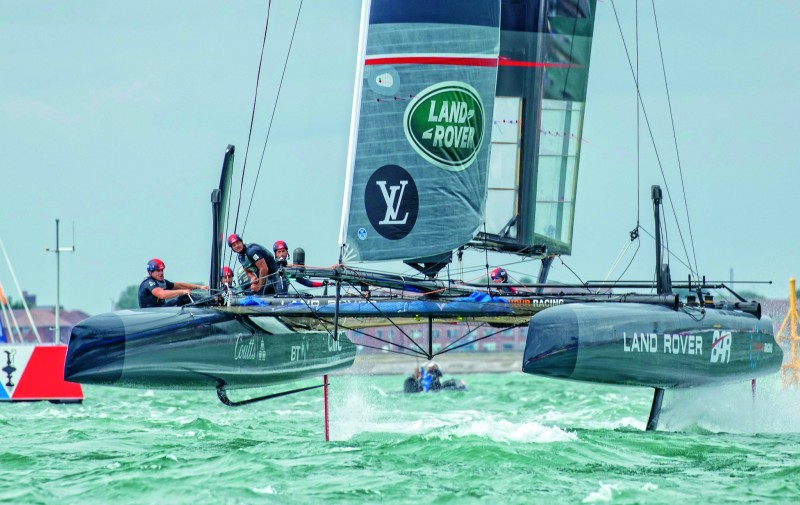 A hydrofoil is a miniature airplane attached to a two-and-a-half-foot mast on the bottom of a surfboard. Instead of using air pressure to create lift, it uses water pressure, and the energy of a wave propels forward rather than an engine. And because a surfer weighs a lot less than an airplane, the foil can generate lift at a slower speed: “flight” takes place at only about three miles per hour when the proper pressure is applied.

The hydrofoil was invented in the late 1800s and was used in a variety of ways long before it was ever placed on a surfboard: water-skiers used foils as early as the 1950s; the USSR introduced several hydrofoil-based fast-attack crafts into their navy; and when the America Cup sailing teams incorporated foils, it eliminated the friction of the hulls and the teams’ speeds doubled. 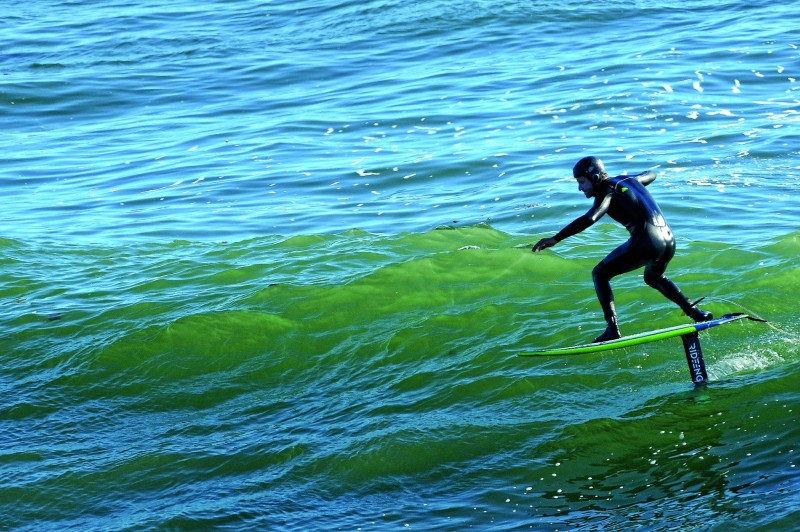 Author Kyle lifts off during one of his first sessions aboard a foil. Photo Kookson

A number of Hawaiian surfers, including Laird Hamilton and Mango Carafino, pioneered the technology on surfboards in the early 2000s. But it wasn’t until 2017 that foil-boarding caught fire around the world, largely thanks to water-sport phenom Kai Lenny. “When I started doing it I had to seek someone out to build me a foil,” Lenny tells Waves. “Then two or three companies popped up, and ever since companies have been popping up all over the place.” Some of these brands include Cabrinha, Slingshot, GoFoil, Ride Engine, and Lenny’s sponsor, Naish Foils. Many existed as kite-surfing manufacturers before entering the foil market.

Last year the young Hawaiian posted a video of himself foiling in which he kicked out of a wave, gyrated back out to the lineup using only the power of the foil, and then dropped into the wave behind it. The video went viral and the stunt drew media attention from around the world.

Today, many other top surfers are adding foils to their quiver, allowing them to surf previously un-rideable waves at speeds never before possible. “When you have the best surfers in the world riding foils, guys like John John [Florence], Kelly [Slater] and Jamie O’Brien, it’s naturally going to have a big impact,” says Lenny.

A few days after my first attempt, I drive to Haut Surf Shop to meet Coleman Buckley, head of research and development at Ride Engine, a Santa Cruz-based company that designs foils. I need more intel on this perplexing craft.

The 30 year old, who has sun-bleached blonde hair and freckles from a life spent in the ocean, is one of the better foil-boarders in town. “Picture yourself on a 10-foot board,” he says, explaining why a foil is so much faster. “You have 10 feet of board in the water, plus the fins and a leash. It’s actually slowing you down a lot. You’re not dealing with any of that friction [on a foil].”

“When I tried to standup, the board took off without me,” I lament. The trick, he says, is to completely rethink my weight distribution: instead of spreading it from heel to toe like I would on a normal surfboard, I must oscillate my weight between my left and right feet to maintain equilibrium and harness speed.

Buckley, Fox, and I take our foils back to the horrible wave a few days later. Buthman, a friend who knows my obsessive tendencies when I dive into a new sport all too well, lends me his Gath helmet before the outing. Heavy-duty head protection is a smart accessory for foil-boarding, which can have serious consequences. When former pro surfer Homer Henard’s foil flipped over and struck him above the eye, it resulted in a trip to the hospital. “Next time I get on a foil I’m going to put on battle armor and a welding mask,” he tells me. 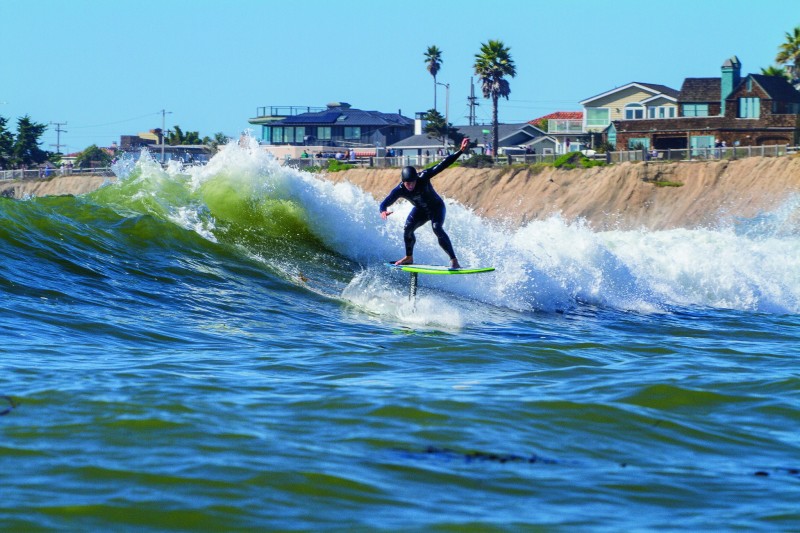 Buckley catches a wave and easily maneuvers the foil around the rest of us. I can’t help but notice, though, that introducing foils into the lineup poses a serious risk if the user is less skilled. When vessel-sized standup-paddle-boards appeared in our lineups (also thanks to Laird Hamilton) a few years ago, it was the equivalent of introducing semi-trucks onto roads previously used by Honda Civics and Mini-Coopers. The collisions became more brutal. The introduction of foils could be like adding Ferraris with protruding blades—and not all drivers know how to handle sports cars.

While Buckley admits that he can’t control where people will use Ride Engine foils, he says his company’s goal is to create products that allow surfers to draw new lines on new waves—not to jam up existing surfing spots.

Lenny echoes Buckley’s opinion that most waves that are good for foiling aren’t good for surfing. “If foils and regular boards are in the same lineup, though, I think seniority should always go to the sport that’s been around the longest,” he adds.

As I watch Buckley effortlessly hover along an un-breaking swell, gliding silently above the sea like a pelican, I am mesmerized by the simple beauty of it all. The foil is an expression of humans at our best: using our creativity to dance with nature to a new beat. 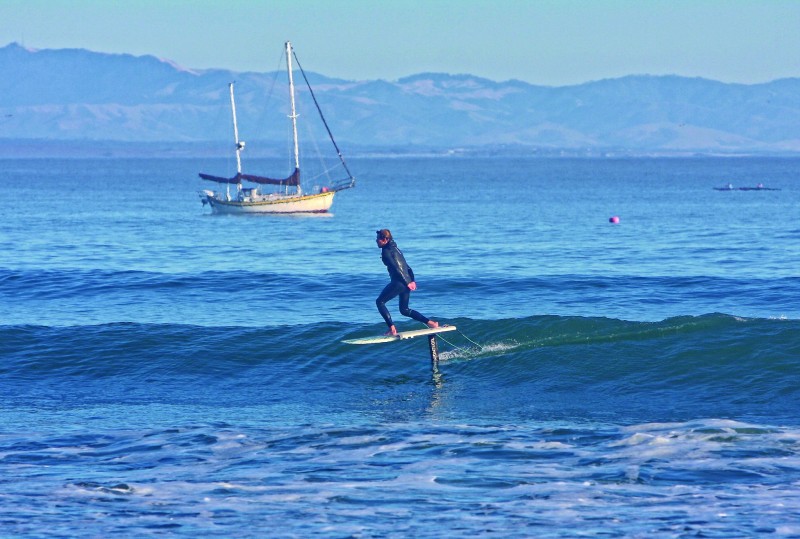 Buckley doing a little R & D on one of his Ride Engine foils somewhere in Santa Cruz. Photo Tyler Fox

On my next wave I stand up and push down hard on my front foot. I push so hard that the foil doesn’t lift at all and I slowly chug along. Then, I lean back slightly and the rocket takes off. I hold on for a moment before flying off the back. It will take another 20 or so tries before I am able to successfully ride a wave.

It’s possible that foil-boarding will remain too technically difficult for the masses to adopt. Perhaps it will remain in the hands of a select few—another feather in the cap for those who want to push the envelope and conquer new waves. Lenny, however, tells me that it’s been difficult for Naish to keep up with order requests, and of Ride Engine, Buckley says “we basically can’t make them fast enough.”

When I ask 10-time Molokai to Oahu Paddleboard Champion and avid foil-boarder Jamie Mitchell where he thinks the sport will be in five years, he says, “I bet we’re going to see more people use them to make open-ocean channel crossings.”

I pose the same question to Lenny, who made a 50-mile channel crossing from the Big Island to Maui on a foil last year using only wind and open-ocean swells. He pauses, then says, “They’re going to get lighter, stronger, and stiffer.”

“It’s crazy to let my mind go to and imagine what’s possible,” he goes on. “Five years from now I bet you’re going to see guys doing 8-foot airs on 2-foot waves.”

A week later, Buthman comes over to my house and we laugh about the fact that even though there’s a big winter swell coming, all we want to do is ride foils at horrible waves. “Every time I do it, I feel like I get significantly better,” he says. “It’s like I’m a grom learning how to surf again.” 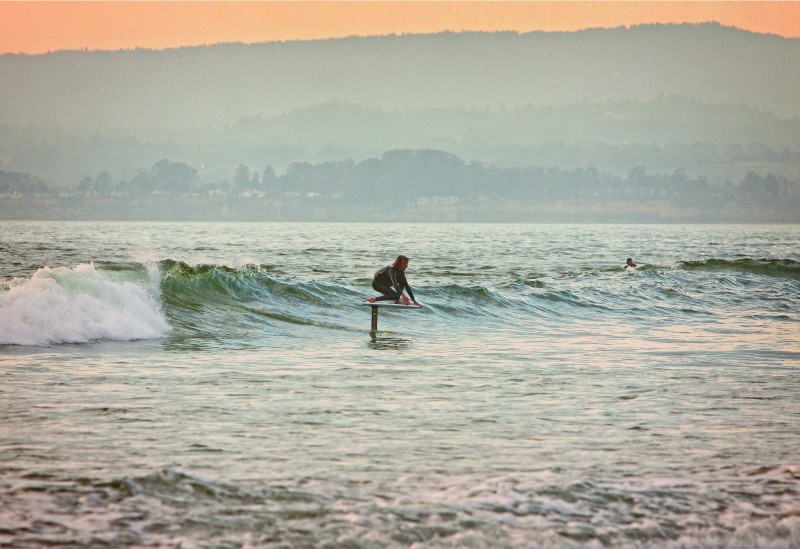 Santiago Hart is leading the foil charge for the groms and even shapes his own boards. This particular board is 3-foot-8-inches and was made from half of Wilem Banks’ broken Mavericks board. Photo Tyler Fox