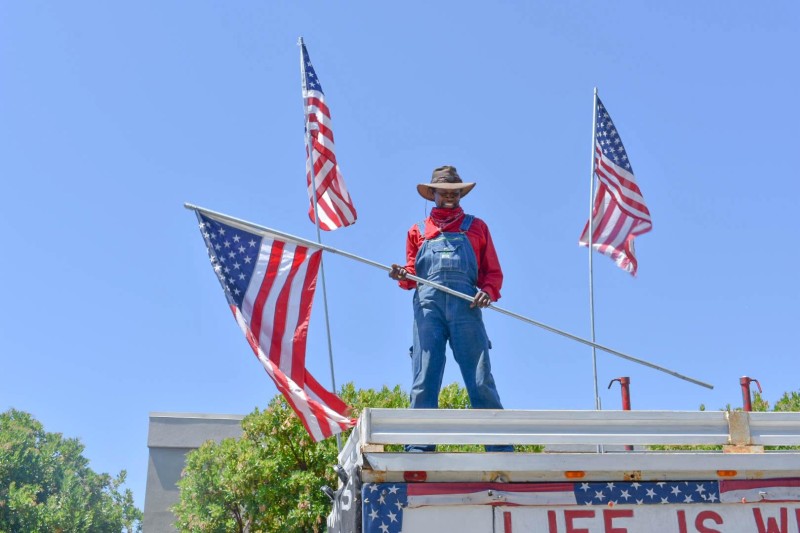 Curtis Reliford has been asking Santa Cruz residents to join him on a “journey of kindness” for more than 11 years. A Santa Cruz resident himself for the past three decades, Reliford got involved in charity work after his home state of Louisiana was hit by Hurricane Katrina in 2005.

Having seen Reliford driving around town for years behind the wheel of his “Peace Truck,” I decided to meet him and learn a bit about his story.

Reliford had been absent from Santa Cruz for some time, having deployed last winter to Standing Rock Sioux Reservation, he would tell me. As we sat on top of his truck—adorned with symbols of world peace and unity—in downtown Santa Cruz, Reliford recounted his story about how he got his start, and what his plans are next. Passersby honked and shouted their hellos.

The Peace Truck isn’t Curtis’s first gift to struggling communities. Before Hurricane Katrina hit the nation’s Gulf Coast, Curtis lead an Alcoholics Anonymous group for Black men in Santa Cruz called “Brothers teaching Brothers.” He saw a gap in recovery groups in the area and decided to start his own weekly meetings in the early 2000s. Around 20 men would attend every week.

And then the hurricane hit and Curtis knew his devotion to helping people was about to shift in a new direction. He took encouragement from his young daughter who was just eight at the time. She said, “Dad, if anybody can do anything for those people, you can do it,” and with that he was off. He bought a truck and forged a new path of purpose across the country. He drove 27 times to New Orleans and back, he tells me.

It was on those trips back and forth to New Orleans that he discovered new ways he could use his determination and his Peace Truck to make a profound difference. Over the past four years, Curtis has made nine trips to the Hopi Reservation in Arizona to provide food, water, clothing, and construction materials donated by communities around Santa Cruz County.

Curtis told me that when he heads back to the Hopi Reservation on August 4th, the first thing he’ll do is hand out the items people requested the last time he visited. As he explains, “I go door to door—direct service.” While there, he uses his background in landscaping to help residents with their home and property projects. He’ll also attend a traditional ceremony the Hopi invited him to on his last trip over.

Curtis plans on driving his iconic red truck, and with the help of volunteers, bring two additional transport vehicles for supplies. He also hopes to bring a small cohort of journalists and photographers to shed light on the Hopi people’s life.

As he says, “I would like them to do journalism, take pictures…and just really bring a good energy to the people—talk to them, let them know they haven’t been forgotten.”

When asked if his journey in the Peace Truck is lifelong, Curtis says that every time he thinks about stopping, something inevitably pulls him back in. There was the time he was standing on a cliff looking out over the ocean, asking for some type of sign that he should continue doing this work, when a whale breached right in front of him. He took this as a symbol to lean further into his volunteer work. Another time his back was hurting and he was thinking about quitting when a local lumber company called him up to say they had thousands of dollars worth of fresh lumber to donate. “It’s been happening like this for 12 years,” he says. 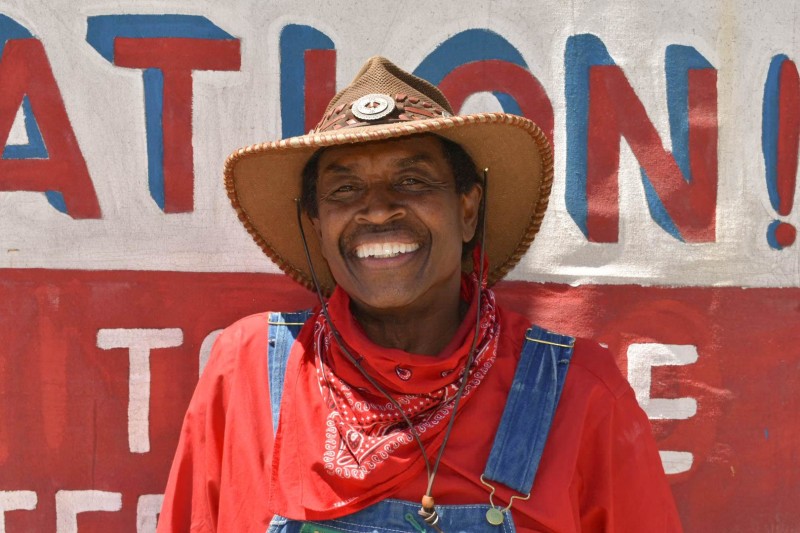 His long-term plans with the Peace Truck are “…to touch two percent of the American people, and see what kind of change we can make for this whole world.” Brandishing this message and a list of future projects, it seems Curtis will continue to spread the word for some time to come.

Kirsten Merritt is a UC Santa Cruz graduate working as a freelance writer and editor in the area.

One comment on “Catching up with Curtis the Peace Truck Man”