After a recent string of natural disasters that isolated Big Sur’s residents and endangered its businesses, locals are hopeful that visitors can return by fall 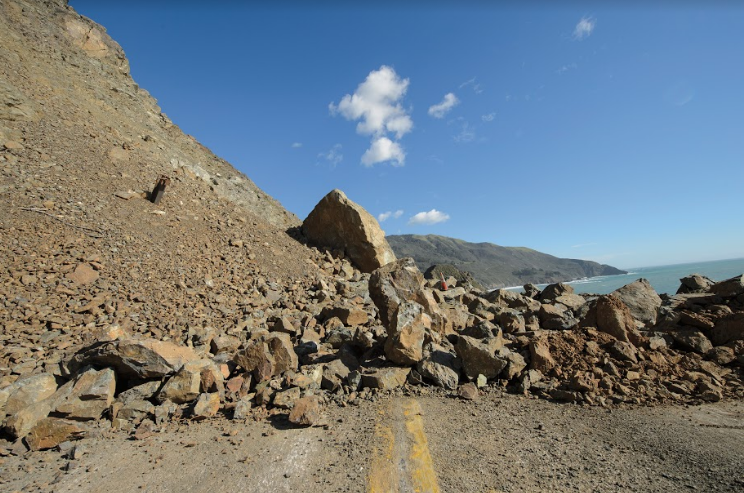 Amid massive, landscape-altering cliff slides, crippled bridge infrastructure, and severely limited access to the overall Big Sur region this year, an economic lull has cast itself over the rural, internationally famous edge of Earth overlooking the Pacific Ocean.

Heavy winter storms contributed to the deterioration, and now ongoing reconstruction, of the Pfeiffer Canyon Bridge, a section of the Highway 1 route leading in from Monterey to the north. In mid May, a million-plus tons of mountainside slid down over a southern portion of Highway 1, about 60 miles south of Monterey, isolating a section of coast that has come to be known as “The Island.”

Over the past several decades, Big Sur’s notoriety as a world-class tourist destination has grown rapidly, intertwining its revenue inextricably with the local business community, which makes recent road closures a tourniquet around cash flow. “I don’t want to paint the devil on the wall, but sometimes I have this feeling of, ‘My God, I wonder how long this coast is going to survive,’” says Magnus Torén, who runs the currently shuttered Henry Miller Memorial Library. “The bridge cracked, and in my 34 years on the coast, it’s probably the most traumatic event we’ve had—socially and economically.” 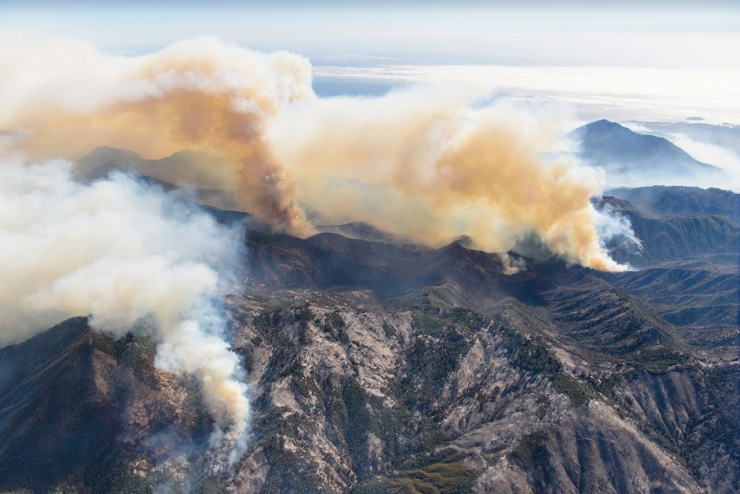 The Library, as well as Torén’s residence, is located in “The Island,” where the only access is via Nacimiento-Fergusson Road, the lone route that crosses the Santa Lucia Range. In a way, he says the experience is a reminder of why he originally fell in love with the area.

“It’s an amazing feeling—so beautiful on the coast,” Torén says. “One neighbor saw a mountain lion walk down the center of the highway, and I saw deer everywhere and birds sitting on the road. There’s a whole new sense of nature reclaiming its space, and that’s beautiful.” 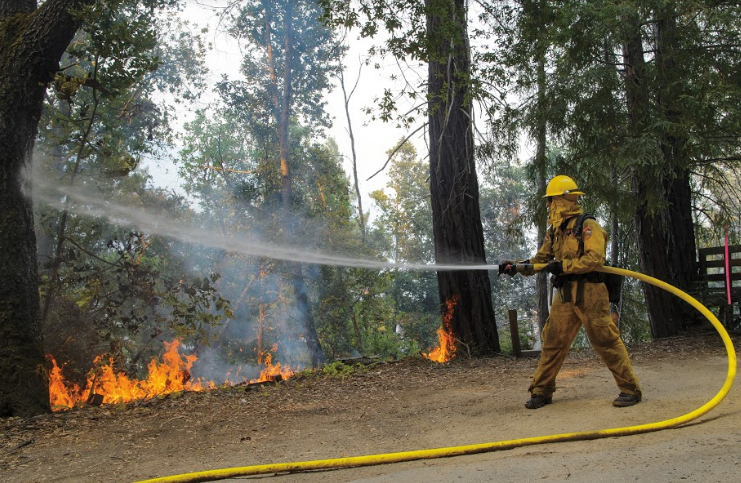 Meanwhile, the beloved Library, which is normally a lively event venue, is out $70,000 and counting due to revenue loss and damages. Until the space can be reopened, Torén has arranged a satellite location in Monterey to host events and has run a fundraising campaign that has yielded $42,000 to get the venue back on its feet.

Kirk Gafill, the general manager at the Nepenthe Restaurant and president of the Big Sur Chamber of Commerce, says that Nepenthe is running at about 1 percent of its normal business level—“24 to 36 guests per day”—mostly for locals. The majority of other businesses located in the central enclave have closed, save for the Post Ranch Inn, which is running at about 50 percent occupancy and shuttling in high-roller guests by helicopter.

Gafill, whose parents founded Nepenthe and raised him in the area, says times have been trying for the community, but that he remains optimistic. “The 800-pound gorilla—what it’s all about for us—is Pfeiffer Canyon Bridge, and if that opens by what we hope is mid- to end-of-September, and Mud Creek and Paul Slide have both reopened”—the section where the million-ton landslide came down—“I’m pretty confident we’re going to be pretty darn close to normal business in fairly short order.”

Gafill states that a business survey within the Big Sur-proper area last February estimated about $320,000 losses daily. “When you’re looking at businesses that are running at 0 to 40 percent from essentially mid-February through [prospectively] September, we’re talking about many, many millions of dollars lost,” he says. 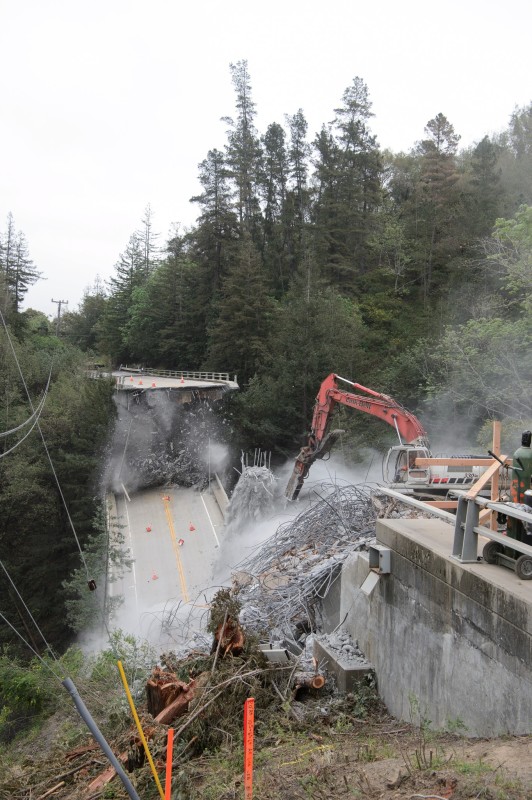 CJ Nugent, formerly the bar manager at Assembly in downtown Santa Cruz, moved to Big Sur two years ago with his fiancée, then lost his bartending job at Nepenthe Restaurant in February due to curtailed business. Luckily, because he lives just north of the downed bridge, Nugent is still able to drive into Monterey. “The real challenge is faced by the 400-ish people who live in between the [land] slides and the bridge that was [destroyed],” he says. “Our community is split in half. We can’t get to work except via a hiking trail, and likely won’t have full-time [work] until the bridge is replaced.”

Nugent says small Big Sur businesses have been “decimated” by the highway closure during peak tourist season. This blow comes after the Soberanes Fire devastated the area last year.

When asked if he is confident that local businesses will bounce back, he says, “They’re mostly run by resilient folks who have endured similar challenges in the past while living on this crazy highway. You learn to adapt and lean on your neighbors.”

Before this forced lull, Gafill says that visitation to Big Sur steadily increased by approximately 35-40 percent from 2011 to 2016.

That, too, presented Big Sur with some challenges, says Torén. He explains that many longtime locals worry about the fate of the region due to high volumes of visitors. “It’s the old battle between commercial interests and simply the love of this coast. I myself am no better, in a sense,” he muses. “I have the Library—I bring people in from all over the world to this little place. And part of that is the allure of Big Sur, and part of the reason I do it is [because] I love Big Sur and I’m just so compelled to share it. So it’s a really tough equation: when do you say enough is enough?” 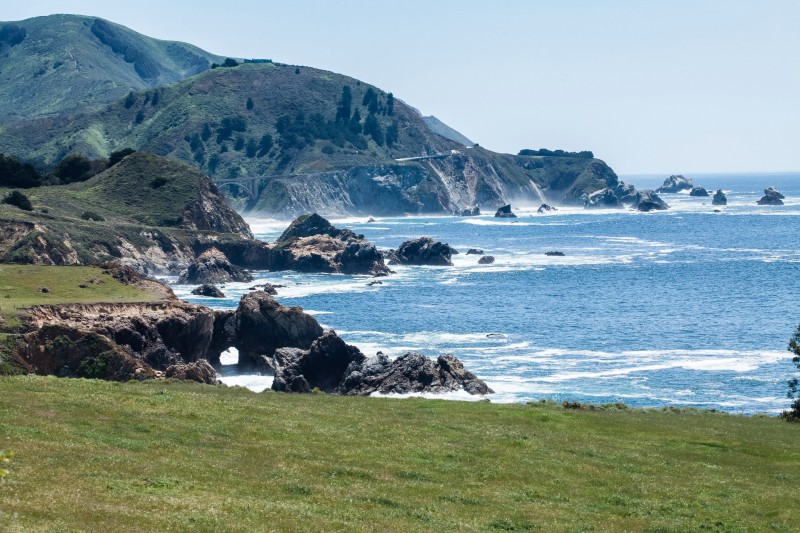 He goes on, “Many people have been thinking about ways to limit visitation so that we don’t love the place to death. And the irony is that nobody asked for a complete shutdown, which is what Mother Nature has provided.”

A partial solution came earlier this summer when a half-mile “Community Bypass Trail” opened, making Southern Big Sur accessible to the public once again. Determined visitors can now circumvent the downed bridge by foot, with a shuttle available on the other side to ferry them to the Big Sur sights. For more information, visit surtransportation.com.