When I was 14 years old, I had been living aboard a small sailboat with my family for close to two years, vagabonding throughout Mexico and Central America. While migrating north along the Caribbean coast of Guatemala in 2000, we decided to seek out a storm-protected harbor up the Rio Dulce, where a recent string of pirate attacks had earned the area a bad reputation. 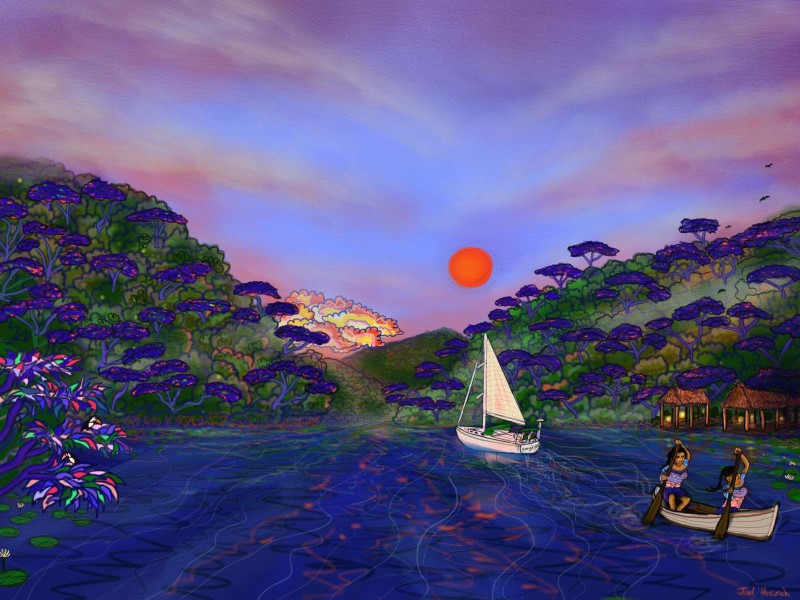 Sailing vessel Songline heads for the mouth of the Rio Dulce in Guatemala, near the port city of Livingston. Illustration by the author. Follow his work on Instagram @Joelhersch

Some sailors traveling along the river had taken to hiring local off-duty policía—men in uniforms who would perch on boat decks with revolvers on their belts. The idea was to send a message to any pirates who may be watching: “This vessel is not worth your trouble.”

Other boats went up in convoys of twos and threes, many of them also armed—especially the Americans. But that wasn’t my parents’ way.

Instead, my dad, Marc—with his oversized black mustache and aviator sunglasses across his face—and I sat in deck chairs on the stern of the boat with spearguns propped over our shoulders like Civil War re-enactors and listened to The Doors greatest hits over the speakers.

The hope was that any potential attackers, perhaps studying us from just beyond the veil of mangroves and mangle trees, might mistake our spearguns for rifles. Better yet, maybe they’d think we were crazy enough to try and use them in a showdown.

The music and the rumble of the diesel engine echoed out over the emerald waters. Towering limestone cliffs flanked the gorge and the sounds of the jungle played off their walls.

My mom, Monica, read a book in the shade as we powered up into the outflowing “sweet river,” leaving the open ocean and the small town of Livingston in our wake.

My parents had decided we would ditch our tight quarters for a while and take a bus into Guatemalan high country to see the ancient Mayan ruins of Tikal. But to do that, we needed a secure harbor to leave our home, a 42-foot monohull named Songline. Despite the talk of piracy, the Rio Dulce was known for dozens of well-reputed marinas up river, on Lake Izabal, where sailors could leave their boats for weeks on end, safe from Caribbean storms.

The rumors circulating the Rio Dulce were frightening, but there were horror stories almost everywhere you went in Central America, and many were doubtlessly inflated as they were passed around. Gossip among “cruisers”—international individuals and families living aboard boats—was like a currency, but for kids such as myself, the real past time was finding other kids and seeking out adventure or trouble. Sometimes friends abounded, and other times there was no one.

The news making its way around the sailing community included a recent attack on a cruising family from the United States. Guatemalan pirates—usually bandits in dugout canoes with outboard motors, equipped with guns and machetes—had boarded the boat and demanded money. In the process, their boy, a 14-year-old like me, was shot in the chest. Fortunately, we learned, he had been quickly evacuated to a hospital and survived. The same year, armed men hijacked a commuter ferry, killing five people, and another cruiser was found shot to death aboard his boat while at anchor.

Still, countless other sailors talked mostly of the country’s immense beauty and the genuine and welcoming nature of most of the locals. These travelers tended to believe that stories of these gruesome attacks and ruthless pirates were blown out of proportion.

According to the U.S. embassy, which recommends “exercising caution” in the remote Rio Dulce region, piracy in Guatemala is part of a larger trend of lawlessness in the nation. “The police force is young, inexperienced and under-funded and the judicial system is weak, overcrowded and inefficient. Criminals, armed with an impressive array of weapons, know that there is little chance they will be caught and punished for their crimes,” reads a 2007 U.S. government crime and safety report, which goes on to say, “The number of violent crimes reported by U.S. citizens and other foreigners has increased in recent years. Incidents include, but are not limited to, assault, theft, armed robbery, home invasion, carjacking, rape, kidnapping, and murder.” (In 2004, four years after my family’s departure, owners of some of the major establishments on the Rio Dulce, along with government assistance, hired the Guatemalan Navy to patrol the river, according to online cruising forums. Many of the marinas in the area are now secured by armed guards with watch dogs, allowing the Rio Dulce to “flourish” as a foreigners’ cruising destination.)

It took a full day for Songline to motor 20 miles up the river. Our speed under engine power was seven knots, conservatively, but the river flowed against us, reducing our pace to a slow crawl. All around us the jungle loomed and rose steeply into mountains obscured by mist and clouds.

There were small communities of Mayans, dressed in embroidered traditional garb. Young women washed clothes, men fished, and boys leapt playfully off of low branches into the cool waters. They seemed happy, busy and vibrant.

While the cruising community sounded their alarms over the incidences of piracy, the history of violence and tragedy in the country, which I gathered bit by bit, made the recent spree of attacks on foreigners seem almost melodramatic.

During our four months in the country, I learned about a 36-year civil war in Guatemala in which a general commanded a campaign that massacred more than 200,000 Mayan Indians, mostly in the course of just three years during the ‘80s.

Over the next few months, we heard firsthand accounts of the horrors that befell families…

And on one occasion, were invited into an indigenous family’s home on the outskirts of Guatemala City to watch video they had secretly taken documenting the genocide. My mom and I stepped outside when the footage became disturbing, but my father stayed.

As we motored deeper into the jungle, the sun sank lower. Two Mayan girls around my age rowed nearby in a dugout canoe. I waved at them and they waved back, smiling—20 yards away but a world apart, I thought, noticing that one of them had an electric smile and high cheekbones.

We wound our way up the Rio Dulce without incident. The spearguns were laid on the deck, forgotten, within an hour. And if any pirates on the shore nefariously evaluated our worth, we were deemed not worth the sting. Maybe it was the wet laundry hanging across the deck, or perhaps the tune of Jim Morrison’s “Hello, I Love You” rambling across the riverbanks was enough for them to second-guess their motives.

We emerged from the river’s narrows at dusk into a wider, open body of water. The sun hung low and red like a ripe papaya. Waterfront businesses sprang from the riverbanks and a massive bridge spanned the distance, connecting Lake Izabal with a town called El Relleno. The smell of oil and trash lingered in the humid air, and as darkness filled in, large bats crisscrossed the violet sky.

We found our new digs, temporarily at least, at a dock slip in a secluded yacht club called Suzanna’s Laguna. There was access to electricity and water, and it featured a small restaurant and bar with a tin roof, a book exchange, and showers. It reminded me of a trailer park, and that would have been fine except that there we no other kids. For a short time there, I wanted to be back in Santa Cruz, doing “normal” things—playing on sports teams, having friends, maybe going on dates—not always saying goodbye.

Homeschool was a daily routine, which included 8th grade algebra lessons, assigned reading and writing, and multiple choice quizzes. Class ended with illustration, because it was the only subject with which I would lose track of time.

The marina was full of melancholy, self-satisfied adults, most of whom asked me in one way or another if I truly understood what an extraordinary experience I was having.

I wasn’t certain what they wanted to hear, but I wondered if I could escape in a dugout canoe, or perhaps an inner tube from the market, and float back down the Rio Dulce to meet the Mayan girls who had smiled at me. I was pretty sure they weren’t concerned with what was extraordinary; they probably just wanted to be happy.