A spontaneous road trip around Barbados 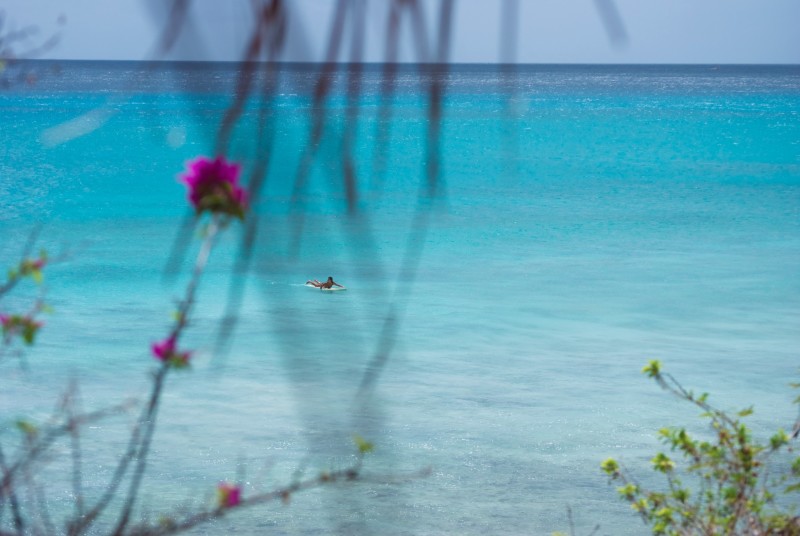 We were lucky enough to be the only ones out surfing multiple times throughout our trip. The only competition we had were the 200 resident sea turtles that would cut us off regularly. Photo: Kim Mayer

The travel itch. It hit us both hard after the long winter months when night outweighs the day. My partner in crime Kim Mayer is very well traveled, having made her way around the world for five years while competing professionally in the World Qualifying Series surf events. I’ve done some traveling myself—after college, I bought a motorcycle and rode around Asia. We were both craving someplace new. One cold, foggy Santa Cruz morning, I leaned over and asked, “Where is somewhere you have never been and want to go?” Kim blurted out, “Barbados.” I found a deal and booked it four days later.

It takes about three hours to drive around the whole island of Barbados—a little longer if you aren’t familiar with driving on the left, maneuvering large potholes, and navigating unmarked, narrow streets.

This magical land lured us in with its varied shades of blue and turquoise seas. We spent afternoons sitting under palm trees in the hot sun, watching waves crash against the sparkling pink sand. 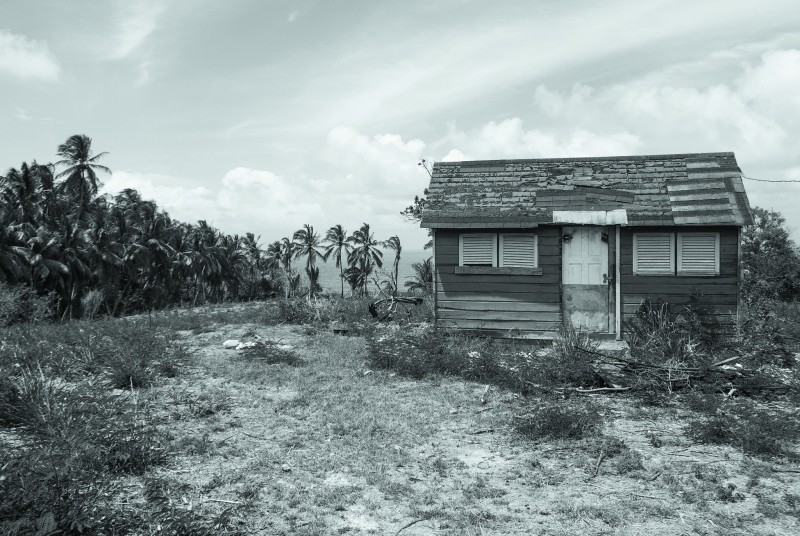 It was a very bumpy ride to get to this house, which stands alone for acres and acres. The famous surf spot Soup Bowls is just beneath the palms. photo: Leslie Muirhead

Every bend in the road held more than just the electric ocean staring back into our curious eyes. Day after day, locals with serious expressions rapidly cut fresh coconuts open with machetes, then gracefully pour the juice into plastic bottles to sell. Poverty sprawled across the shack-filled streets, making its way to the middle of the island, where tourists don’t often go. Locals farming, hanging laundry, and drinking rum in the streets—it all seemed to drift by in slow motion as our intensified senses took over.

The classic Caribbean beaches and waters on the West Coast make you feel as if you are diving into a real-life aquarium, swimming with extraordinary sea life. Drive 35 minutes across the island to the East Coast and the landscape transforms into a wild, rugged coastline filled with good surf, rough and unruly waters, more animals than people, and natural warm baths perfect for a relaxing soak. The South Coast has a reputation for the most beautiful beaches in world for a reason, and was home to our favorite surf break of the trip, Freights Bay.

I have previously heard travelers say that Barbados is too windy or too Americanized, and that Hawaii or Mexico are better if it’s warm waves one’s after. I’m grateful that we ignored them. When it comes to satisfying a case of wanderlust, I’ve found it’s best to go experience it for oneself. 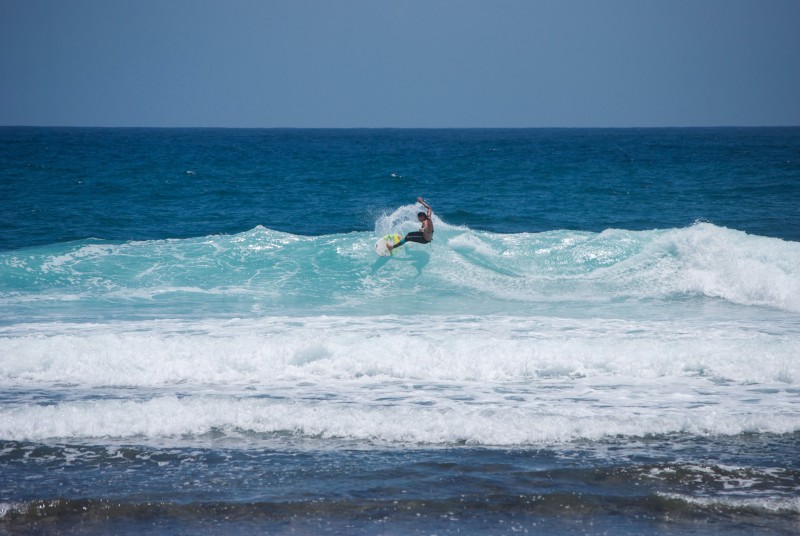 The locals were pumped to see Kim shredding at Soup Bowls, where the waves break on super-shallow reef. Photo: Leslie Muirhead 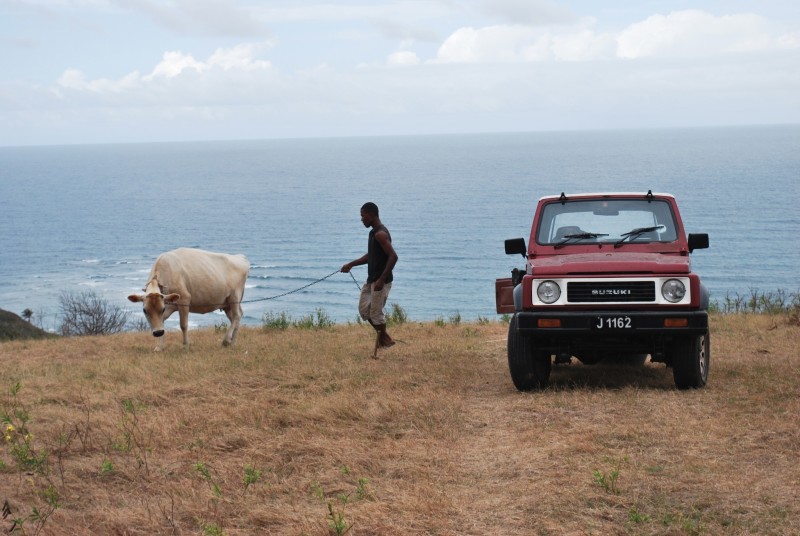 We stumbled upon Stephen and his cows while we were lost on the East Coast. He is an animal farmer and wants to go to college but doesn’t have the money. He taught us about the different cow breeds he has. Photo: Leslie Muirhead 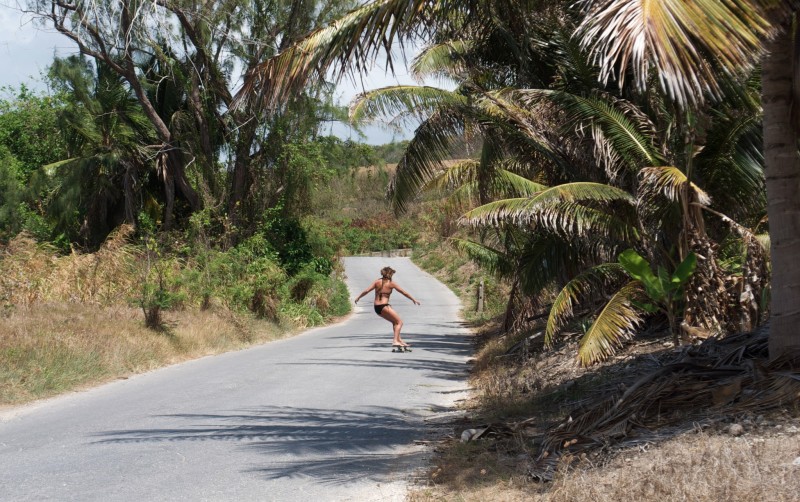 We brought our skateboards and were constantly on the lookout for good hills and roads to bomb. Every once in awhile, when the potholes were mellow, one of us would say, “pull over!” and we would enjoy a quick ride. Photo: Leslie Muirhead 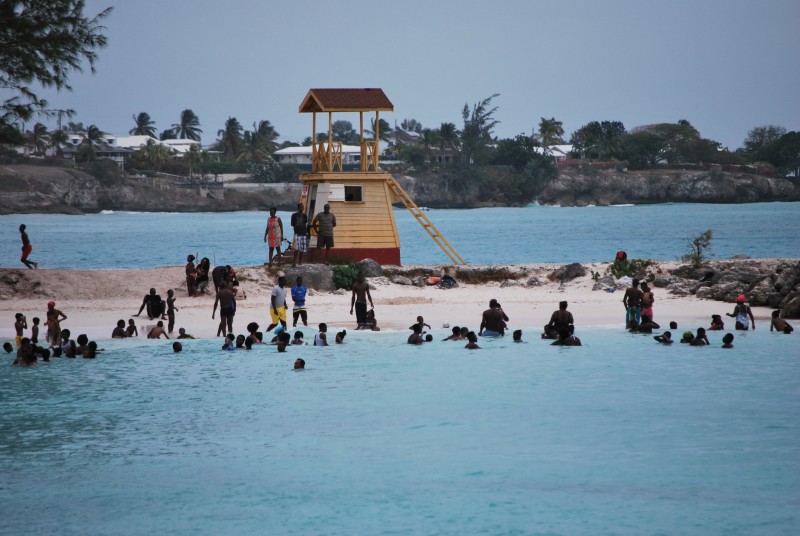 On the second day of our trip we joined in celebrating Barbados’ 50th anniversary of independence. We could feel the air fill with pride as families took the day off to enjoy the beautiful island in peace. Photo: Leslie Muirhead 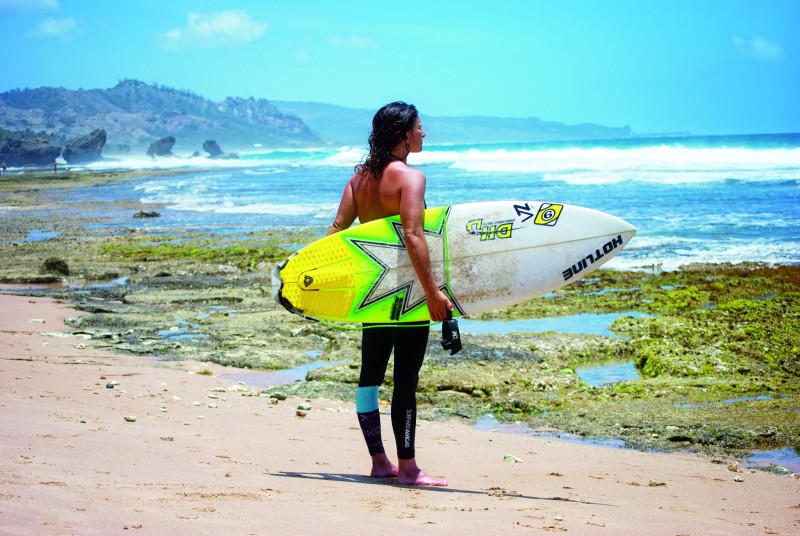 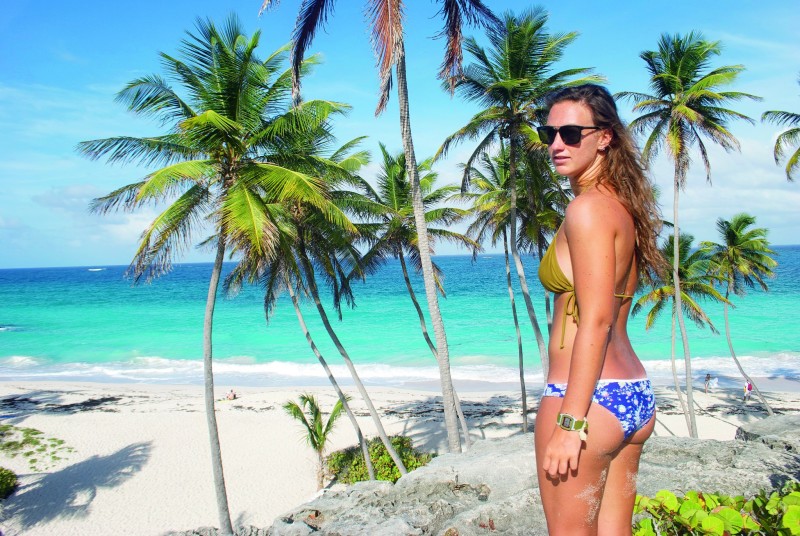 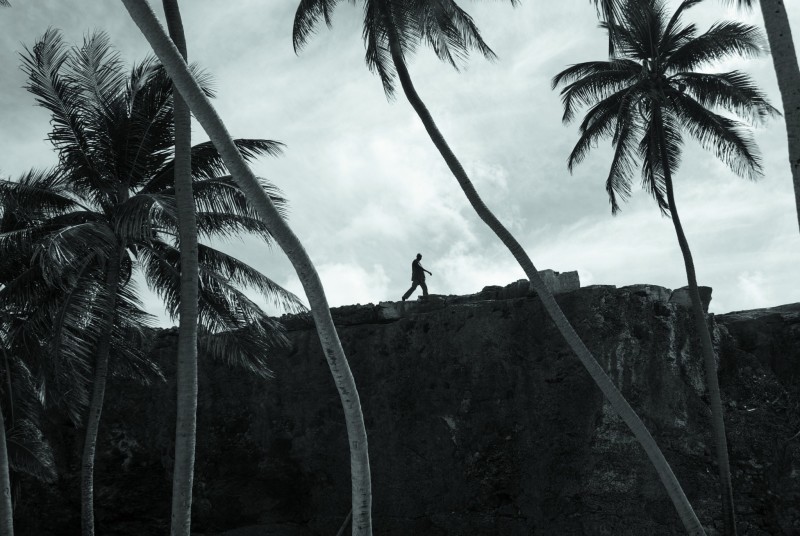 The guardian of Bottoms Bay Beach. After Kim and I bodysurfed the intense shorebreak, we realized the local lifeguard had been supervising from the cliffs. Photo: Leslie Muirhead 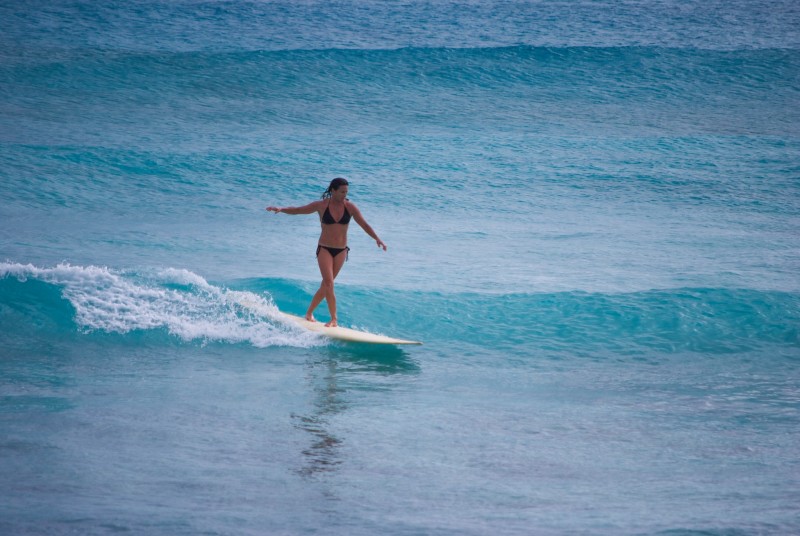 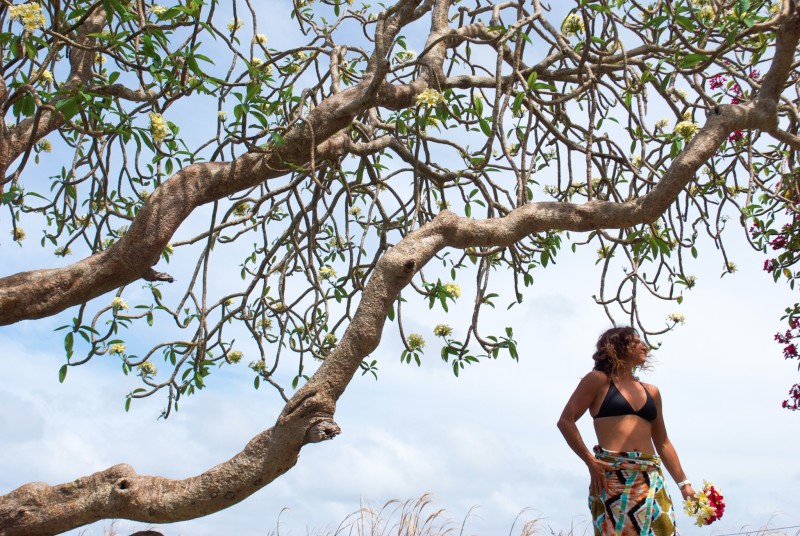 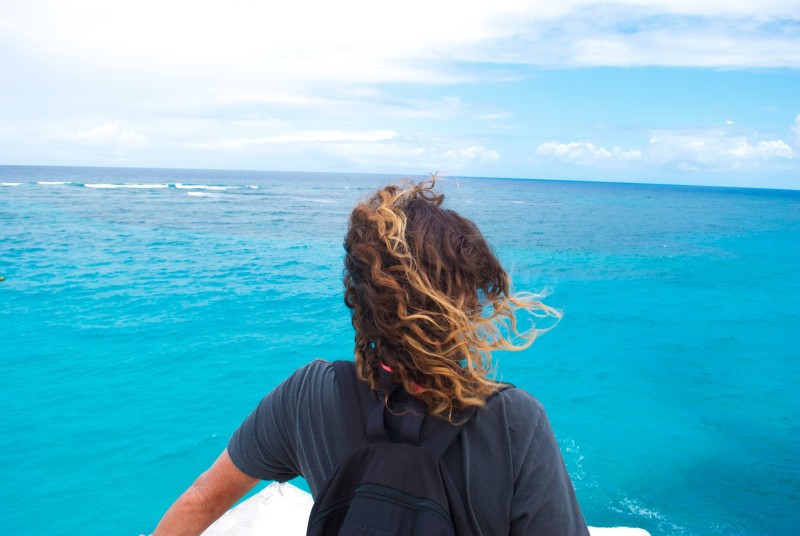 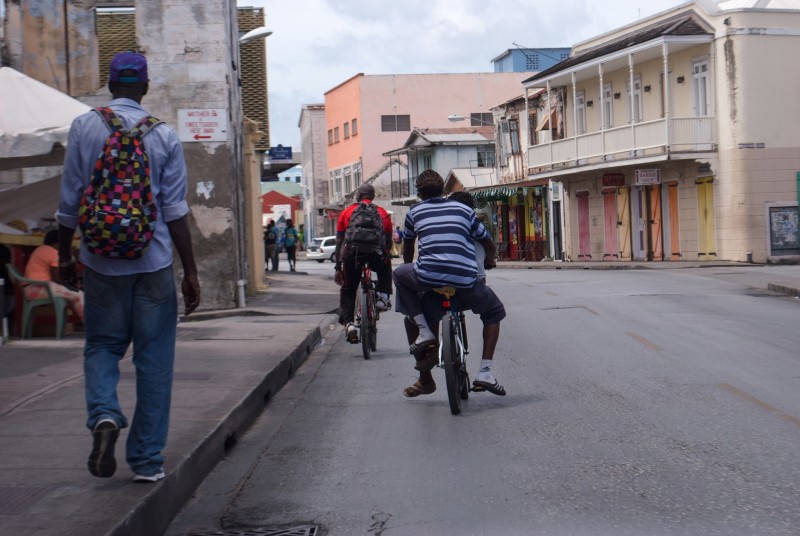 Samuel, aka “The Conqueror,” is a farmer. We met him while he was picking okra under the afternoon sun. He has been working on this farm his whole life, and now he owns it. Photo: Leslie Muirhead 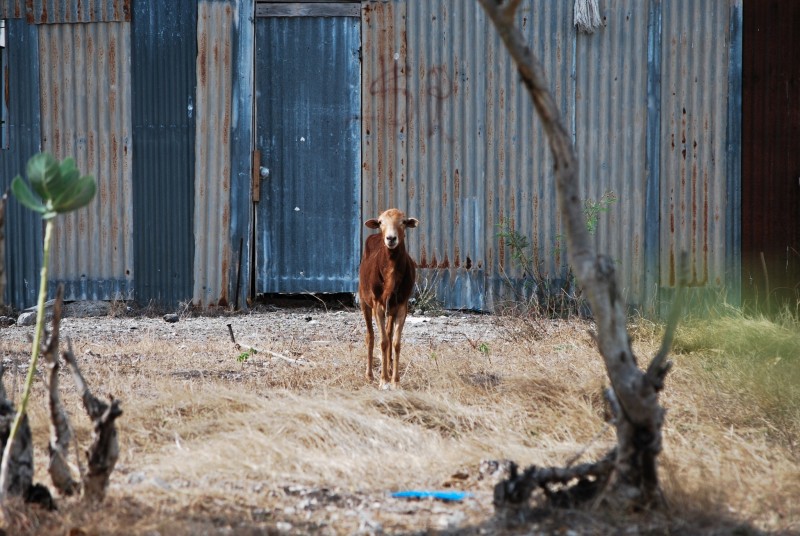 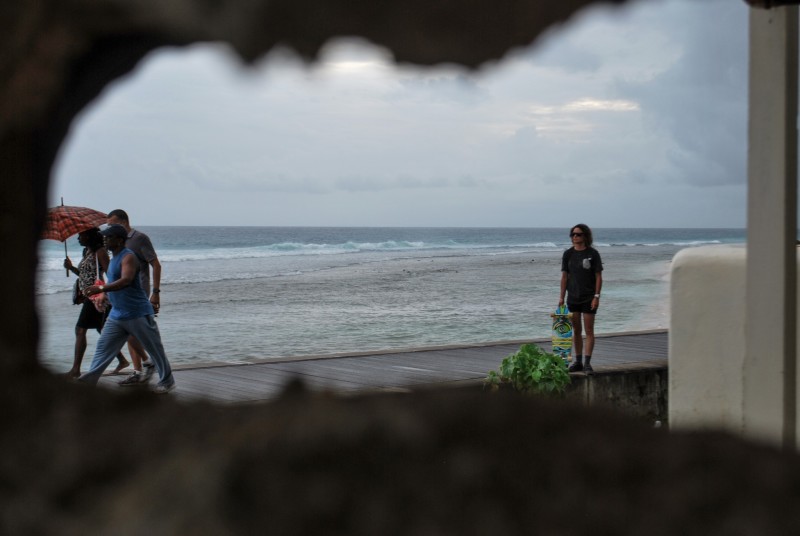 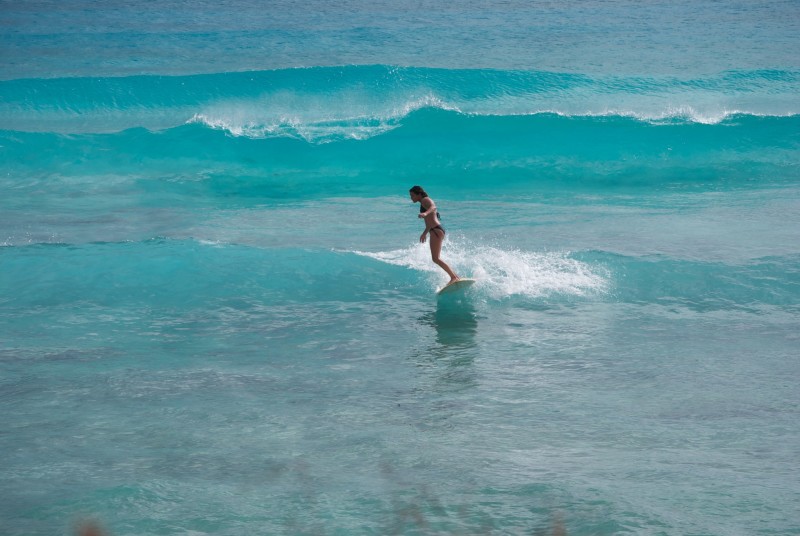