the advancement of women in big-wave surfing today

Female surfers have been charging alongside their male counterparts since waves were first ridden. 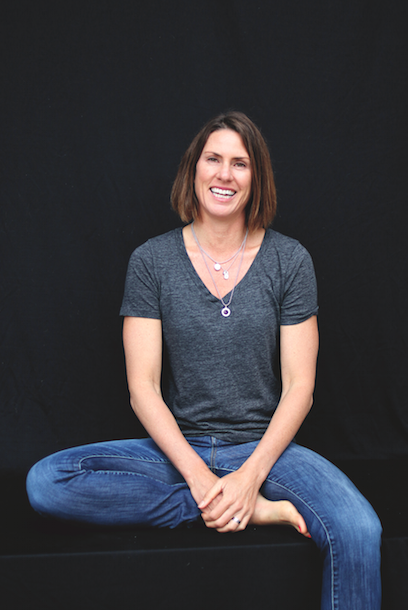 Historians believe that adults and children of both sexes rode flat pieces of wood throughout Polynesian waters for thousands of years before the Hawaiians surfed their coastline in the 1700s. And while surf history is punctuated with notable women—like Australian Isobel Latham, who surfed tandem with Duke Kahanamoku in 1915, and Mary Ann Morrisey, who rode an 80-pound redwood board off the California coast in the 1930s—men have always dominated the sport, while women have struggled to simply break in.

But the tides are turning, and nothing embodies the exciting advancement of women in surfing quite like the changes currently underway at Mavericks. Last fall, the California Coastal Commission voted 7-4 to require Mavericks contest organizers to come up with a plan to include women in future events. This landmark decision came 17 years after Santa Cruz’s own Sarah Gerhardt became the first woman to surf the infamous spot. Gerhardt, who is considered to be one of the most influential female surfers of all time, has several ideas for how these changes could unfold. 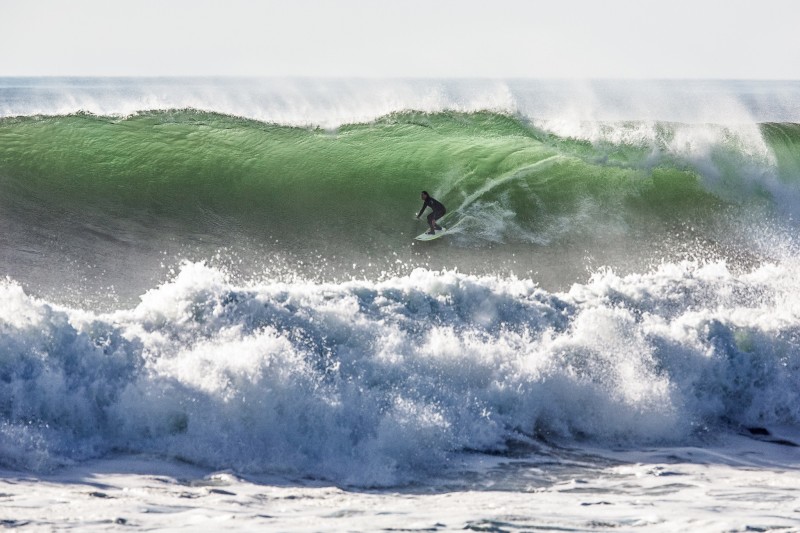 “Either the contest organizers open up a heat or have spots for women,” she says, “or the Half Moon Bay Harbor Commission gives out a second permit so that women can have their own event, as there are enough talented women who want it to make it happen, and there are plenty more female big-wave surfers on the way.” Gerhardt’s big-wave journey traces back to Arroyo Grande, the small Central Coast town where she grew up. At the end of 8th grade, with summer vacation approaching, Gerhardt waxed up a shortboard and, with no knowledge of how to surf, paddled out through the dumping beach break north of Pismo Beach.

“I didn’t want to go to the mall, so the girls didn’t know what to do with me,” she says, “and the boys, well, they just ostracized me for flailing around in the surf line up.” “High school was a tough time,” she adds.

Later, as a teenager with moderate surfing experience, Gerhardt felt a pull to surf bigger waves. She boarded a plane to Honolulu and hitchhiked to Oahu’s famed North Shore. “Look at it like taking a hike,” Gerhardt says of the draw to big waves. “Most people will go to Nisene Marks, Wilder Ranch or Yosemite, but only a very few ever have the desire to climb Mount Everest.” 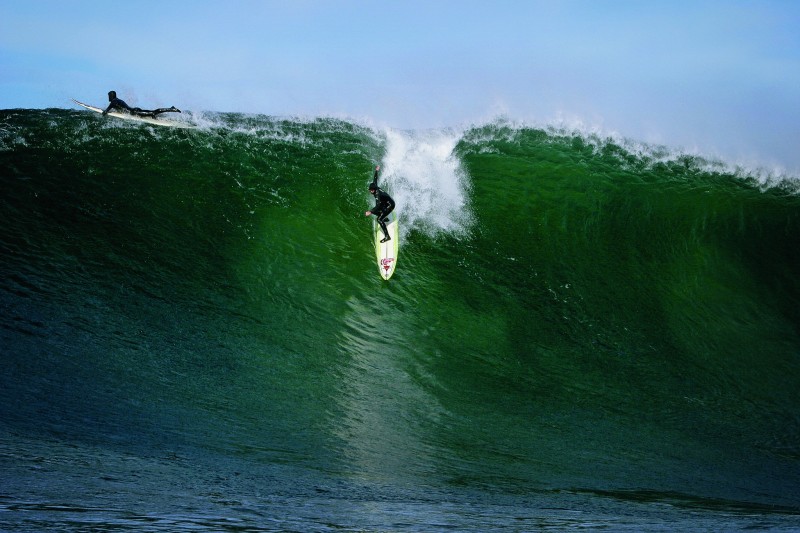 Under the wings of big-wave surfer Ken Bradshaw and her now-husband Mike Gerhardt, she became a part of the North Shore big-wave crew, constantly eager to surf her favorite spots: Outer Reefs, Outside Alligators, and the infamous Waimea Bay. Meanwhile, Gerhardt was preparing to conquer her own Mount Everest—a dream that first materialized in 1994, when she saw Jay Moriarity’s infamous “Iron Cross” Mavericks wipeout on the cover of SURFER Magazine.

Her pursuit of Mavericks began when she moved to Santa Cruz in 1998 to attend graduate school at UC Santa Cruz. She studied big-wave surfing under the tutelage of Mavericks legends Mark “Doc” Renneker and Richard Schmidt, who prepared her to surf massive waves that reach up to 60 feet and explode with such strength and ferociousness that they have registered on the Richter scale. 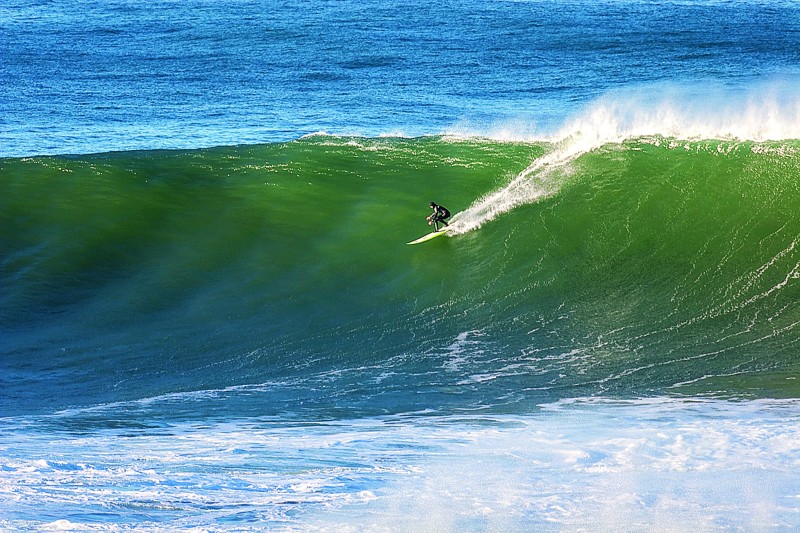 Gerhardt slides down the face of a moving mountain at Mavericks. PHOTO: DON MONTGOMERY

Soon she felt ready, and drove north along Highway with Jay Moriarity and her husband, filled with butterflies, desire, and the drive to face her ultimate challenge. “I paddled out on one of Mike’s nine-foot guns, and immediately got thrashed in the zone between Mushroom Rock and Blackhand Reef,” she recalls. “Finally making it out, I focused on my goal of simply watching intently from the shoulder as to where Mike, Jay and a handful of others sat in the line up.”

“Like it was yesterday, I remember watching the first set come barreling through like an express train,” she goes on, “then [thinking] to myself, ‘Whoa, not only is this place cold, dark, and brutal, it’s way more heavy than anything I’ve surfed before.’”

Gerhardt revisited Mavericks that November with a 10’8” board borrowed from Danny Cortazzo. She quickly realized that it was too much board for her, but she continued inching closer to where the waves were breaking. There, she was greeted by Richard “Frosty” Hesson. 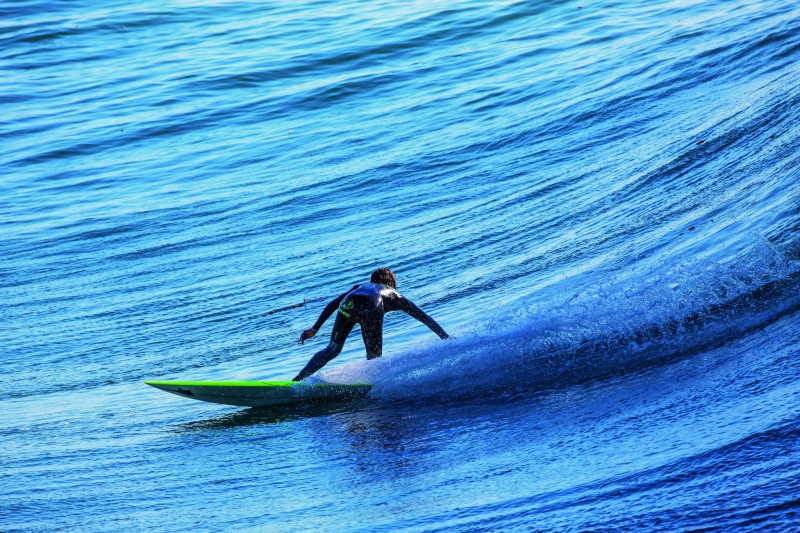 “Frosty saw the hunger my eyes, and I later found out that he told shaper Bob Pearson that he had just met the first woman who was going to surf Mavericks,” says Gerhardt. Hesson connected her with Pearson, who determined that an Arrow 10’4” was her best bet for conquering Mavericks. “Bob shaped the board,” Gerhardt says, “and I was ready for the next step.”

She paddled out with Mike on a clean, low tide day in February 1999. “I sat in the Lates Bowl, and Colin Brown was chatting with me on his way back out from catching a wave,” she says. “I remember asking him if I was in the right spot, and before he could answer I turned to see a 15-foot wave hurtling toward me. “The wave roared, then lifted me up, forcing me to look down at how steep she was. I paddled as hard as I could until the board and wave connected and I was jettisoned down the face.”

After what felt like an eternity, Gerhardt remembers thinking, “I’m still dropping in.” “I rode that magical wave and several others that day,” she says. There’s a direct lineage from Gerhardt, and her groundbreaking accomplishment that day in 1999, to the uprising of female big-wave surfing unfolding today. This year, in addition to the Mavericks developments, the World Surf League added a Women’s Championship event to its 2016/2017 Big-Wave World Tour, and a new documentary, It Ain’t Pretty, spotlights the growing community of women who paddle out into the formidable surf conditions at Ocean Beach and the giant waves at Mavericks. 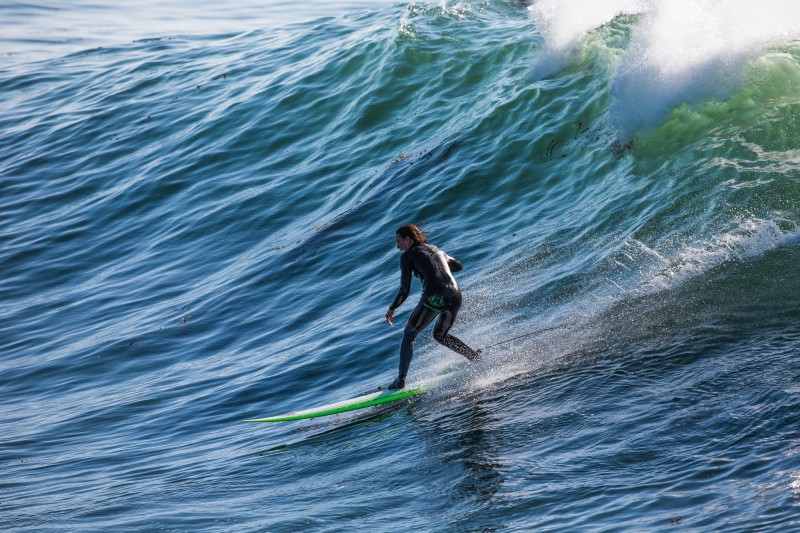 Current female big-wave world champion Bianca Valenti, who is featured in the documentary, credits Gerhardt for paving the way for her and her fellow female athletes. “Sarah is the first real-life super hero I looked up to—a true role model of courage, bravery, power and perseverance,” says Valenti. “She is big-wave surfing’s Wonder Woman.”

Celebrate July Bike Month and our current exhibition, ‘Trailblazers’, with a FREE around the town history scavenger hunt.

MAH has teamed up with Ecology Action and local bike shops to bring you an around the town history scavenger hunt for Santa Cruz Bike Month.

Join this reimagined, safely distanced Race Through Time in honor of Bike Month and our current mountain biking exhibition, Trailblazers.

Solve riddles, plan your route, and whizz through local history in this epic around-the-town scavenger hunt. You have all month to complete and visit as many clues as possible. The top five players will receive epic prizes – stay tuned for more details.