Seaside artist embraces a love of nature, mythology and music 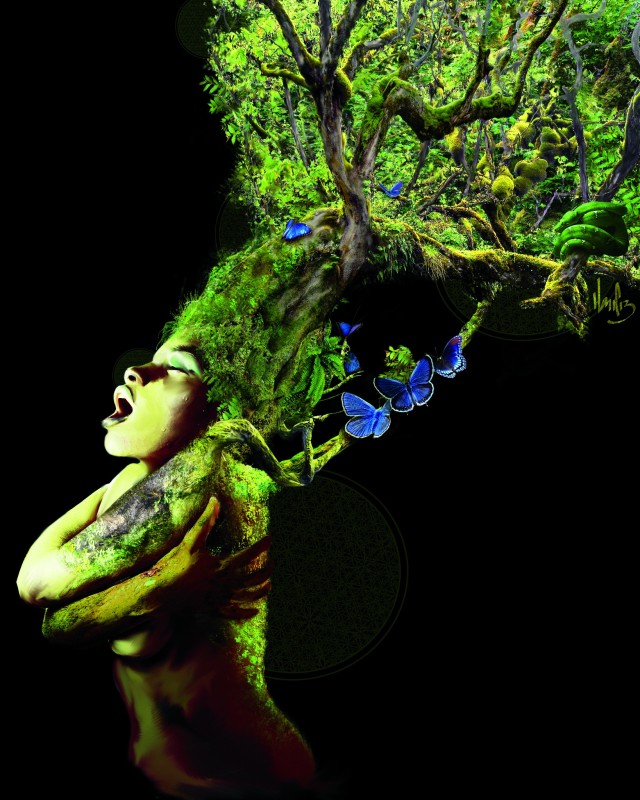 When asked to describe his occupation, Hanif Panni modestly refers to himself a freelancer. But considering the breadth of his work—he is an accomplished artist, a prolific designer, a successful DJ under the monikerHanif Wondir, and performs in the band Animal Farm—a better way to describe the Seaside resident might be as a modern-day Renaissance man. 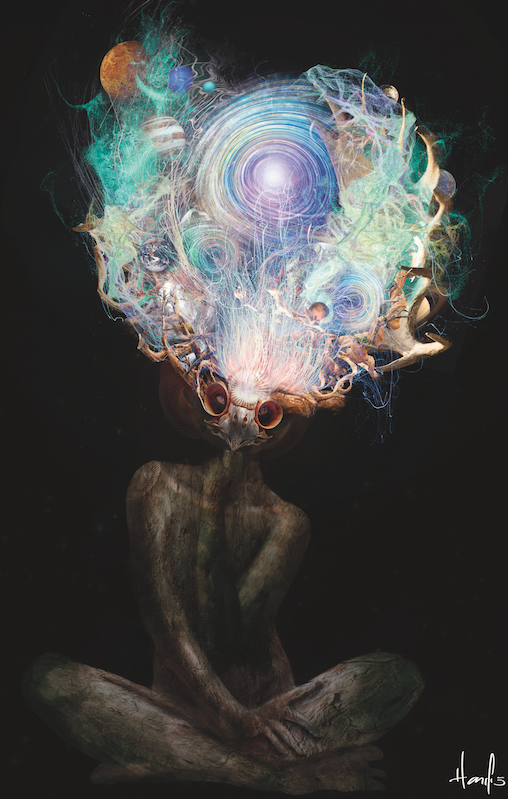 Panni grew up in a home filled with art and music. His mother, a painter, would set up a second easel for him while she worked. Panni would often be more interested in his mom’s canvas, and she encouraged his curiosity by letting him help her, sowing an early love of art that has blossomed over the years.

“I’d paint right along with her,” says Panni. “Sometimes she’d let me do a bird in her picture, or paint something easy—help her out with the clouds or something. I was fascinated by it.”

Panni does a lot of design work, anything from promotional flyers for concerts and events to album covers for musicians, and has also done covers for Monterey County Weekly newspaper. Being exposed to the record album covers in his father’s music collection from the ’60s and ’70s has influenced much of that work, and Panni marvels at both the breadth and quality of the artwork contained on those old albums. He’s also envious of the huge spaces—typically 12 inches square—that the design artists had to work with. 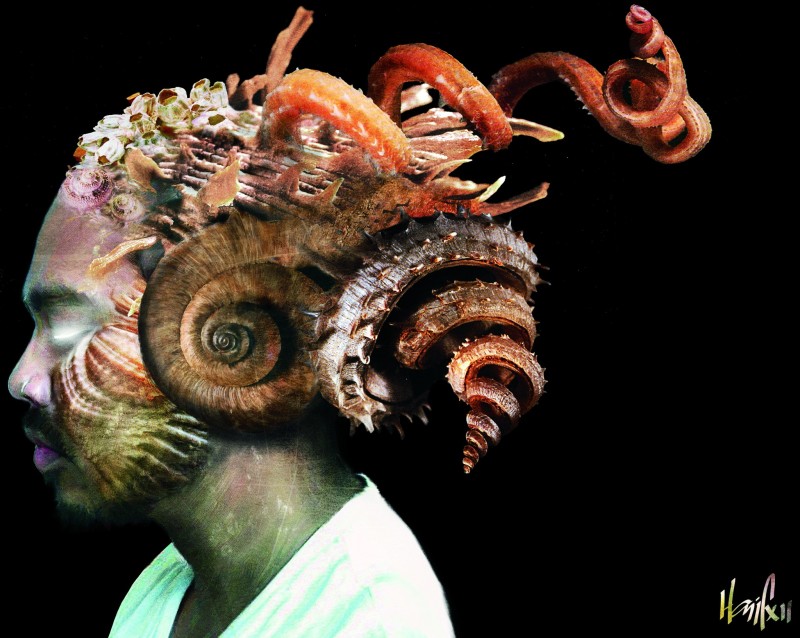 “Think about Miles Davis’s Bitch’s Brew, for example, when you fold that out and see that whole panoramic, it’s amazing,” say Panni. “The old CTI album covers, and Blue Note and a lot of the old jazz covers; they were just trippy and awesome.” 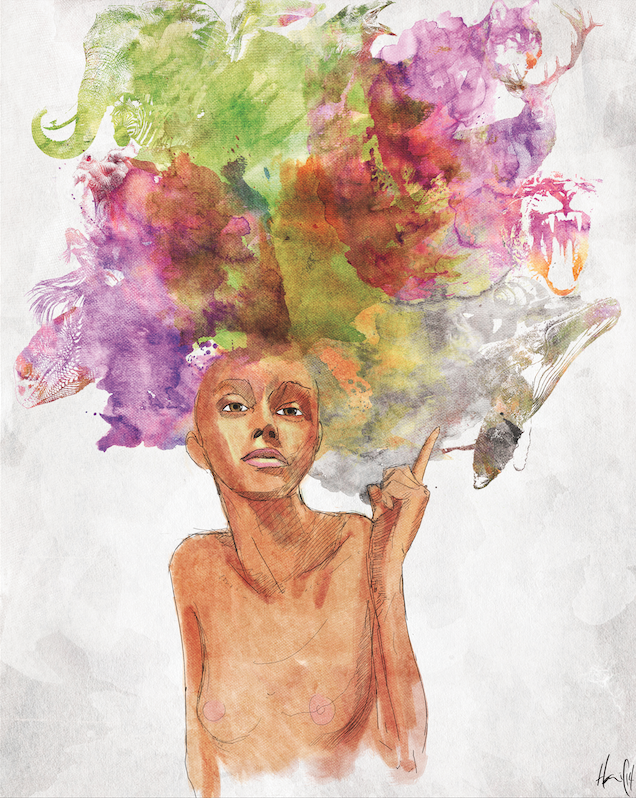 Panni, who is of Bengali and Filipino descent, has a keen interest in Egyptian mythology, which can often be found in his art work. He also regularly touches upon the human connection to nature and our frequent distance from it.

“There’s so much we can learn if we get away from all the distractions and shut up for a minute,” says Panni.

Animals and mythological characters figure prominently in his art. His depiction of the ancient goddess Sekhmet from Egyptian mythology shows her as a lioness with elements of human form. The related piece “Thoth” depicts the Egyptian god of knowledge shown as a man with the head of an ibis (or baboon).

When he’s not creating art or doing design work, Panni can often be found performing with his band or DJ-ing at events such as weddings and art and wine festivals, or performing hip-hop at dance clubs.

As with art, Panni owes his love of music to his parents, who were both musicians. Born in Eugene, Ore., Panni moved with his parents to San Francisco and lived there from ages 2 to 14, before returning to Eugene. In San Francisco, his parents would throw parties that went late into the night, and Panni fondly recalls being overjoyed as “a little guy jumping around” the house dancing and playing percussion instruments with party guests until he could no longer stay awake and would fall asleep on the couch.

These days, the 34-year-old Panni still burns the midnight oil when he’s creating his own art in the Seaside home he shares with his wife and their two boys, ages 5 and 2. The family moved there seven years ago, when Panni’s wife took a job in the Monterey Bay Area as an environmental journalist. He finds the wee hours to be the best time to do his own thing artistically, when he’s temporarily freed from the responsibilities of fatherhood, which he considers to be his most important job. He also takes pride in showing the kids what he does for a living. 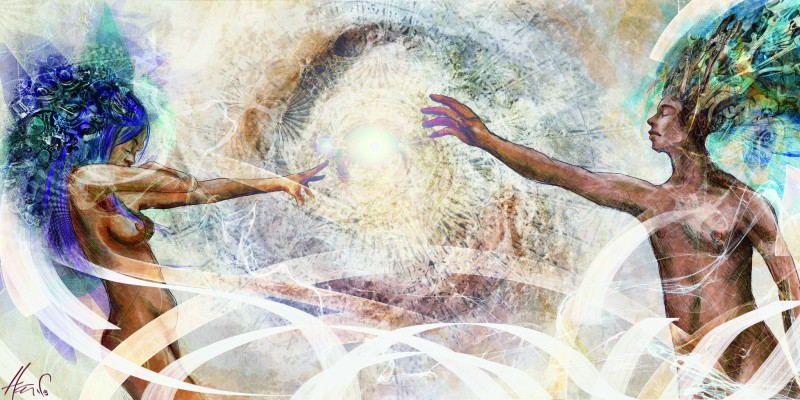 “I like my boys to see me being creative and making that a job, and showing them that’s possible,” says Panni. He knows they might not necessarily follow in his footsteps, and jokes about how they’ll “probably become dentists and lawyers instead.” But he strives to set an example for them through his work.

“I want them to be themselves and be honest with themselves regardless of what they do,” he says, “and if they see Daddy doing that, then I feel good about that.”

Find him online at hanifwondir.com.