Life After Near Death

There are moments in our lives that have the power to completely change the way we live, and look at, our lives. It could be a serious car crash or a job promotion, a first kiss or a final goodbye. These profound experiences are also known as “watershed moments,” a term originally used to describe a ridge of land separating waters that then flow into two different bodies. 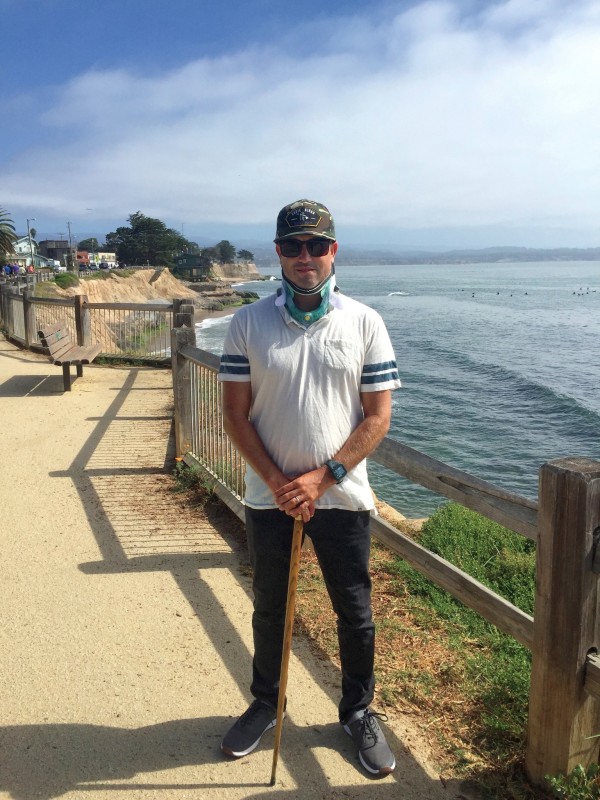 Dollar, who’s internationally recognized as a big wave hellman, broke the Guinness world record for the largest wave ever paddled into—twice: once off of Cortes Bank, an open ocean reef that breaks 111 miles west of San Diego, and again right up the road at Mavericks.

On Sept. 7, 2015, Dollar found himself staring down a massive wall of whitewater as he paddled back out to the lineup at an undisclosed heavy water break near Santa Cruz. “There was no way I could duckdive that wave, so I stood up on my board and dove headfirst, hoping to get as far underwater as possible,” Dollar says.

But he wasn’t going to get very far. He head-butted a shallow rock sticking up beneath him, realizing right away that he had broken his neck. After a frightening and painful struggle, he was able to make it to shore and back to his truck. He rushed to the hospital and was examined by doctors, who found he had broken his neck in four places, incurring head trauma and a concussion. He’d come within a whisker’s width of drowning or becoming paralyzed for life. He stayed in the hospital for five days and left with a neck brace and an estimated recovery time of three months.

The 35-year-old husband and father took the injury very seriously, doing everything the doctors and physical therapists asked him to. But as his neck healed and he was able to reduce his painkiller intake, a devastating truth hit him: not only had he injured his body, he had also suffered a very serious traumatic brain injury (TBI).

“I was not myself,” Dollar says. “It was freaky. I was depressed, I wasn’t sleeping, I couldn’t think clearly. Couldn’t work or even answer emails. I had massive anxiety. I wasn’t sleeping and had severe migraines every day, throwing up from them.”

Dollar expressed his fears to his doctors, who said he probably had a large concussion. Following their usual protocol, they wanted him to wait, rest, and try not to over stimulate his brain. “They kept assuring me, ‘you’re going to get better,’ so I waited,” he says. “There was no improvement. It was insanely frustrating.” 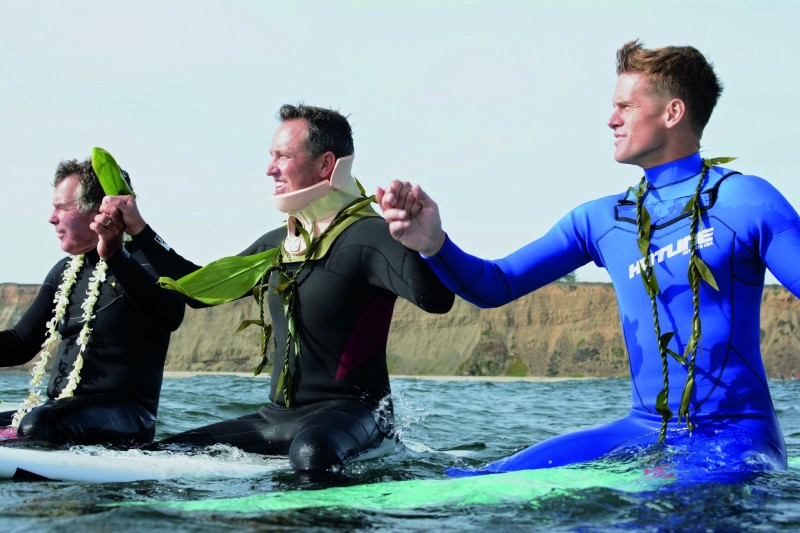 Hoping to find a vine with which to pull himself out of the quicksand, Dollar decided to take matters into his own hands. Prior to his injury, he’d seen YouTube videos by famous psychiatrist Dr. Daniel Amen, in which the doctor discusses how to heal the brain and reverse brain damage using different modalities such as biofeedback, supplements, and Hyperbaric Oxygen Therapy. Most people, especially boxers or football players, do damage to their brains over the course of a lifetime. Proper circulation begins to become impeded, starving the brain of oxygen. The videos gave Dollar hope that healing his brain was possible.

Then, coincidentally, a woman on LinkedIn suggested that Dollar consult with Amen directly. Dollar told her that he’d already been watching his videos. The woman sent Amen a video of Dollar’s giant ride at Cortes Bank, and, just like that, Amen wrote him back and expressed his interest in getting him into his clinic to be scanned. Amen’s brain scan technique involves inserting a radioactive isotope into the bloodstream and then watching a 3D image of the brain to see where the blood goes. When there is damage to an area in the brain, the blood doesn’t flow as efficiently to that area, and it will be inactive.

Dollar’s scans showed holes all over his brain—big holes, especially around the bottom, sides, and top.
“I believe a lot of this was from all the impacts I’ve taken at Mavericks,” Dollar admits. “Lots and lots of brain impact and concussions. This last one was a catastrophic one. All those concussions added up and that was my last straw—my brain went offline. As a surfer, they were blown away to see this much damage, but they were really intrigued. It gave me justification, finally being diagnosed. I have a brain injury but, more importantly, they have the means and understand how to heal it.”

Aside from other means of therapy, the means, in Dollar’s case, is Hyperbaric Oxygen Therapy (HBOT), a treatment prescribed for him by Amen and administered at Bay Area Hyperbarics in Los Gatos.
In HBOT, patients are put in a tube-like chamber, where compression pushes blood and pure oxygen through the blood/brain barrier and creates circulation. Dollar felt better than he had in months after his first treatment in January. He did about 40 treatments back to back—sometimes two a day, six days a week. It was a big commitment, but he was improving every day. 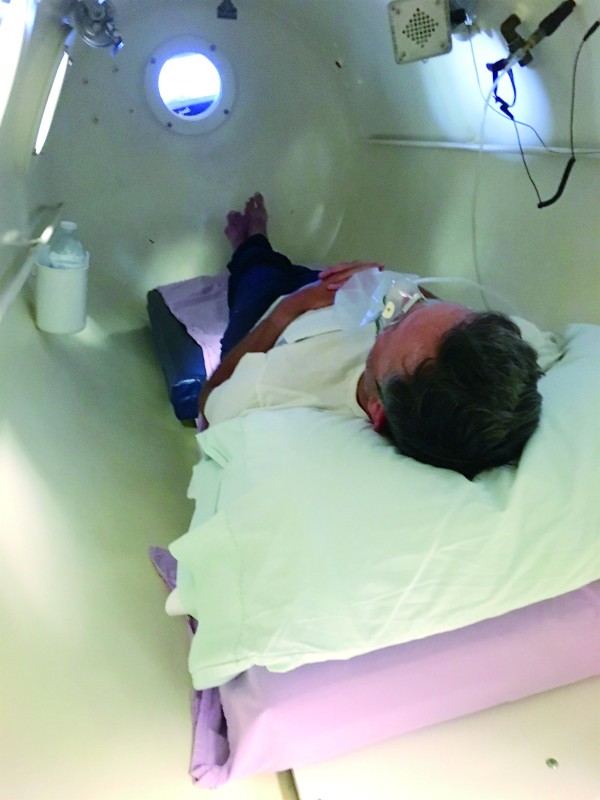 Scott Sherr, a HBOT guru who set Dollar up with Bay Area Hyperbarics, says it is no wonder that Dollar was having such a hard time with “rest and wait” approach prescribed by his doctors.

“A concussion is a wound of the brain,” Sherr says. “It is very difficult for the brain to heal wounds because it is already working at maximal capacity at all times to keep our body in working order. Hyperbaric Oxygen Therapy is an advanced wound-healing technology that super-saturates the body with oxygen. This extra oxygen causes a cascade of healing effects: decreasing inflammation, regenerating tissue, and optimizing cellular function.”

Matt Cook, the director of Bay Area Hyperbarics, has been working closely with Dollar during his recovery. Cook has gotten the surfer’s symptoms under control with neuro-prolotherapy, and, with continued HBOT, is hopeful that he will make a full recovery.

“It’s very gratifying to take care of Shawn,” Cook says. “When he came to me it was difficult for him to stand in one place with his eyes closed and I noticed that he sometimes struggled to communicate. After only a few months he is back to surfing and I saw him before Super Bowl 50 on national television [promoting the Titans of Mavericks competition]. I think he really gives hope to patients who want to heal from head injuries.”

For Dollar, his watershed moment wasn’t the injury, or even the healing process. It was deciding whether or not to continue surfing big waves—an addictive endeavor with a tight knit community that has brought him notable success.

“I probably won’t go back to surfing big waves,” he says. “My brain is too fragile and I can’t take another concussion. But I can go back to having a normal life, a job, surfing, family—the things that matter most to me, anyway. I had a lot of fun doing it, and I’m going to miss it a lot, but I barely survived that accident. I got a second chance. It’s hard to not get back out there to experience that crazy adrenaline rush, but my body is done. I feel like I’ve kind of moved on. I’m really lucky I didn’t die that day. I fought so hard to get here and I’m really happy to be here. I’m just grateful.”