Castles Made of Sand

In March, the California Coastal Commission (CCC) cracked down on the CEMEX sand mining plant, a Mexico-based corporation that dredges sand out of the beach in Marina and exports it all around the world. 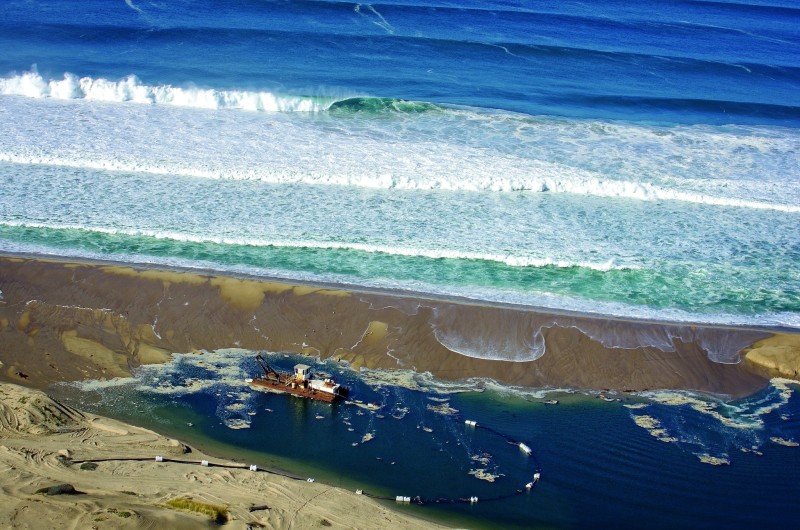 This sand mining plant, which is the last to be operating on the United States’ coastline, has been responsible for the removal of approximately 374,000 cubic yards of sand each year, which it sells to businesses in more than 50 countries, where the majority is eventually transformed into concrete for construction.

That concrete is used to build homes, raise skyscrapers, and expand highways, culminating in the global use of a whopping 15 billion tons of sand every year. Sand is, in fact, the most used resource in the world second only to water, according to the documentary Sand Wars, which local nonprofit Save Our Shores screened for a full house at Santa Cruz’s Patagonia Outlet in March. The screening was one part of an ongoing protest against the CEMEX plant by Save Our Shores, giving many locals a better idea of the broader implications of sand mining for the environment. The plant began operating 100 years ago in 1906, and because the Coastal Act did not go into effect until 1977, CEMEX was grandfathered in and allowed relative impunity. The CCC has had an open investigation into CEMEX since 2009, but minimal action was taken until this year.

The removal of the sand has contributed to an average shoreline erosion rate of four feet of beach—from Sand City to the Salinas River in southern Monterey Bay—each year, according to Retired Naval Postgraduate School professor Ed Thornton, who has been a longtime critic of the mine.

The CCC sent a letter to CEMEX notifying its leaders that the operation lacks permitting for a variety of the company’s activities and, in addition to the Coastal Act, is also in violation of the Land Use Plan portion of Marina’s Local Coast Plan. The CCC has given CEMEX extensions to allow for negotiations on on compliance, but since that compliance would essentially equate not mining sand, the most likely outcome is that the CCC will commence proceedings for a formal “cease and desist and restoration order.”

Included in the list of Coastal Act violations that CEMEX had been committing is the unpermitted construction of an artificial pond near the beach (which they fill with sand and then dredge from), unpermitted sand extraction, and the placement of unauthorized floating dredges, according to the letter sent to the plant by the CCC’s Acting Executive Director John Ainsworth. So far, the commission has not set a hard deadline before commencing with a legal-driven shutdown. CEMEX did not respond to Waves’ request for comment.

Since 2005, CEMEX is reported to have extracted between 159,000 and 300,000 cubic yards of sand each year from a man-made dredge pond, according to Save Our Shores. SOS was working to raise awareness about the erosion that the sand mine was causing and organized a Change.org petition appealing for the CCC to regulate the CEMEX plant.

While CEMEX has been an obvious and just target for environmental organizations, sand mining is only one end of the spectrum on the ways industrial development has compromised the health of California’s beaches.

The majority of the sand that accumulates along the coastline is the product of grain sediments that travel for millennia—originating in mountains and valleys, washing down rivers and waterways, out into the ocean, and flowing along with coastal currents that eventually deliver it to the shoreline, says UC Santa Cruz professor and Director of the Institute of Marine Sciences Gary Griggs. But that slow flow of sediments to beaches has been dramatically curtailed as a result of blocking up most of state’s rivers ways. 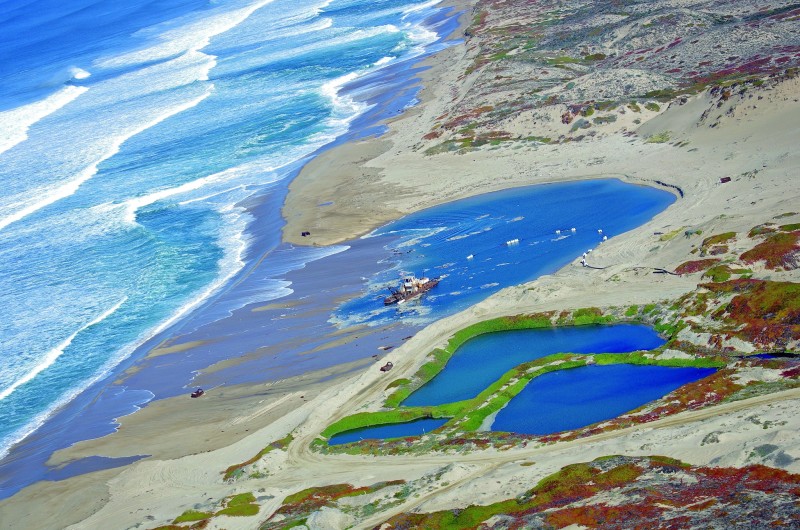 The CEMEX sand mining plant in Marina is facing a potential cease and desist order from the California Coastal Commission. Photo: Gary Griggs

In California, there are 1,404 dams, ranging from small structures in creeks, scaling up to the massive Oroville Dam on the Feather River, which is a towering 742 feet—the tallest in the United States. Additionally, there are approximately 200 debris basins in the state, which trap sediments that wash out of canyons during storms (a measure taken to prevent flooding).

All of this infrastructure traps sand that would otherwise be making its way to the ocean.

On the coastal end of the equation, developing buildings too close to the shore and creating sea walls—embankments that prevent the ocean from encroaching on the land—has also caused beaches’ sand to be washed out with storms and high tide. Think of it like a variety of clogged arteries throughout the body that have slowly cut off healthy circulation.

Griggs says that, under natural conditions, between 60 and 90 percent of California’s beach sand is derived from rivers, while the remainder is fed by bluff erosion. But due to coastal armoring with sea walls and rivers full of dams, about 39 percent of those sediments that should be feeding beaches is no longer making its way into the ocean, a total that he estimates at about 164 million cubic yards.

“If we took all of that sand, and put it into dump truck loads—about 10 to 12 cubic yards per dump truck—we’d have 16 million dump truck loads of sand, all sitting behind dams,” he says. “With that much sand, we could build a beach from Santa Cruz to Mexico, 150 feet wide and 10 feet deep.”

In an effort to counter coastal erosion, the State of California has spent millions of dollars to dredge and truck millions of cubic yards of sand back onto beaches, a process called “nourishment,” Griggs explains. However, due to sea walls and other man-made developments along the coast, that sand washes away usually within about a year.

“I would say that’s not successful, nor a good use of state money,” he says. “Spending millions of dollars to place sand on the beaches and then watch it wash away is so futile.”

And the price of lost beaches? Griggs says it will make the inevitability of sea level rise a much bigger problem as it occurs, and before long, coastal communities around the world will be having to prepare for a dramatic ocean incursion. 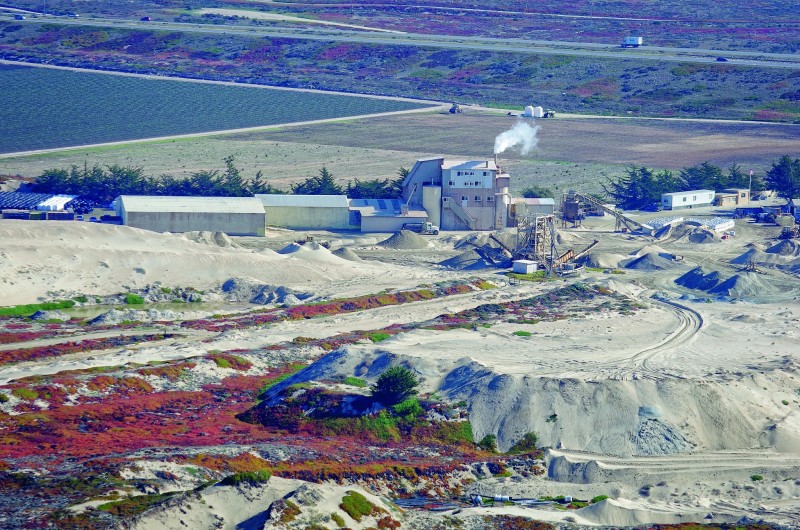 The answer to these problems, he says, will be planning for industrial growth and development in a much different way than we have up until this point in history. It will depend on society’s ability to begin thinking about working with the natural flow of the planet and not choosing to believe that nature is something that can be controlled and contained.

“Getting rid of our reliance on hard structures [along beaches] is going to be important, we’ve got to start adapting for sea level rise, and start making our plans for development looking 20 years into the future,” he says. “We also absolutely need to stop thinking that we can build boxes around the natural world and expect that work for us … Nature always bats last.”

Griggs believes the problem comes down to society rethinking values and the ways corporate money steers the ship.

“These [corporate executives] are making billions of dollars, but what about when there’s no beach to go to when it’s time to take a vacation? Where does the joy and reward in life come from after we’ve made all this money—whether it’s Exxon, or the coal industry, or PG&E—when there’s no natural environment left to enjoy with your kids?” he asks. “It becomes all about these short-term, huge financial profits in big industry—not about what’s left of the earth. And that’s really the sad part of this story.”