Relive one woman’s solo surf trip from Costa Rica to California. This is Part 10 of a series featured in Santa Cruz Waves during the summer of 2016. 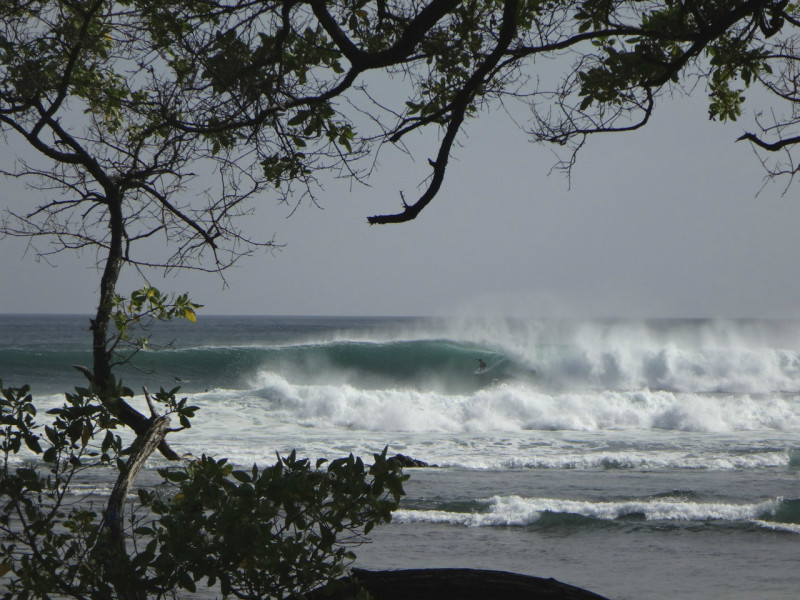 What to do when a surf break is closed to non-competitors? Be a competitor.

The bus catapulted at high speeds down washboard dirt roads, rattling and groaning in a cacophony of protest. Through the teeth-chattering vibrations, I was sure I could hear every screw coming loose, sure that the wheels were on the verge of falling off. My board bag shook loose from its position propped against the seats, and careened into the aisle, smashing into the back door.

Thankfully, my boards and I arrived in one piece at a town in northern Costa Rica with a right reef break that I had heard would be working on the swell forecast to fill in the following day. Unfortunately, as soon as I got to the beach, I learned that a surf contest was scheduled to run all weekend. The contest would start promptly at 7am and the wave I had travelled so far to surf would be off-limits to non-competitors. 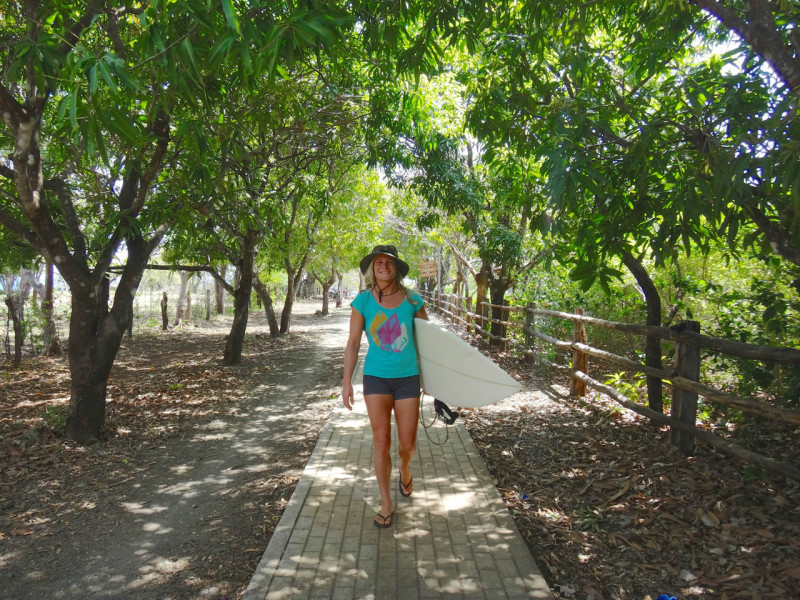 Thankfully, my boards and I arrived in one piece. 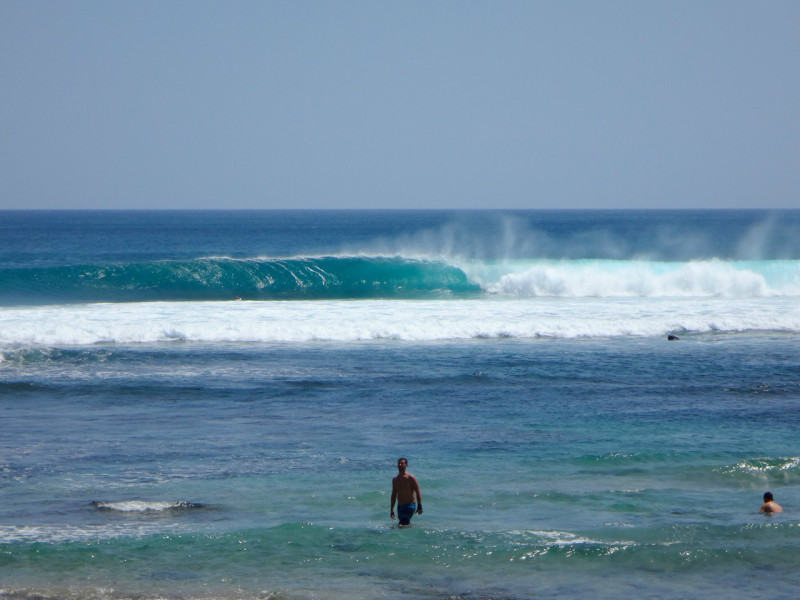 I could see the wave’s potential and desperately wanted to surf it.

Crap, I thought. Maybe I should leave. What a waste. Even with the currently marginal conditions, I could see the wave’s potential. I desperately wanted to surf it, but it was doubtful that the swell would last beyond the contest window. And then I had an idea. Maybe I could just enter the contest.

I ran it by the contest organizers. They said there was still room in the women’s division. I’d get to surf a normally crowded break with just three other people. Rather than a setback, it seemed like a great opportunity.

The morning of the contest, I got in a quick surf at daybreak and then checked the schedule. My heat wouldn’t run until the afternoon, so the swell would have plenty of time to fill in, and I would have the opportunity to watch others surfing it. I looked at the names of the women in my heat, Zulay Martinez and Baily Nagy, and asked the people standing around if they could tell me anything about my competitors. Zulay was in the running for the circuit division championship. Baily was visiting from Hawaii, and had won the US Open junior division last year. Humble pie was in the oven. 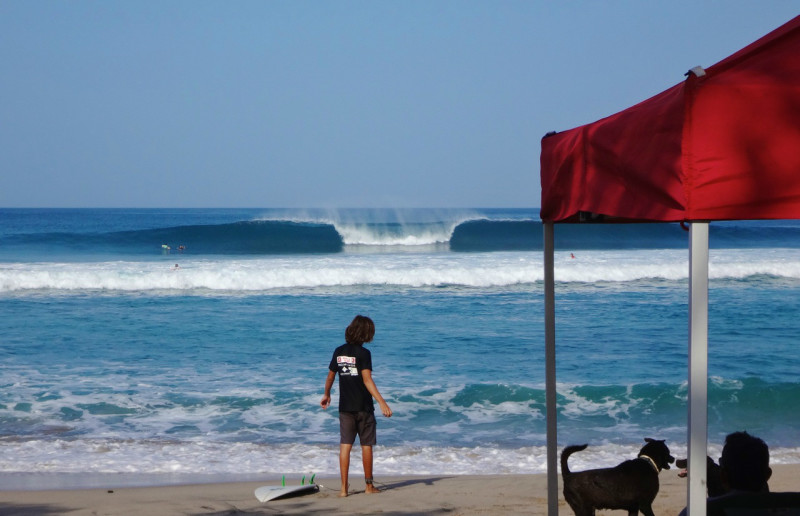 Entering the contest meant that I’d get to surf a normally crowded break with just three other people. 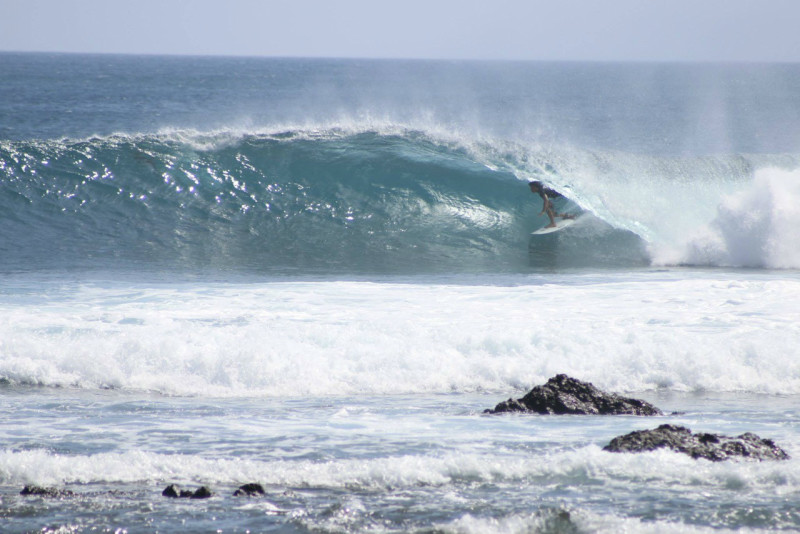 The level of surfing was very high.

I set up my hammock under the trees on the beach to watch the heats. The level of surfing was very high. There were people getting barreled, landing airs, throwing huge turns with glittering arcs of spray. As my heat approached, my nerves electrified. If there’s one thing I don’t like, it’s looking like a fool.

I had befriended a younger girl named Serena, a standout in the junior division, and tentatively asked if she had any advice on competing. “Just remember to have fun,” she said. The simple, youthful wisdom in her words was shockingly refreshing. Who was I kidding? I wasn’t going to make it past this heat. I was doing this in order to surf a world class wave for 20 minutes with two other people, doing it for the once-in-a-lifetime flavor of the experience, to have the opportunity to surf alongside women at the apex of the sport.

In order to stay positive and focused, I established two reachable goals for myself: 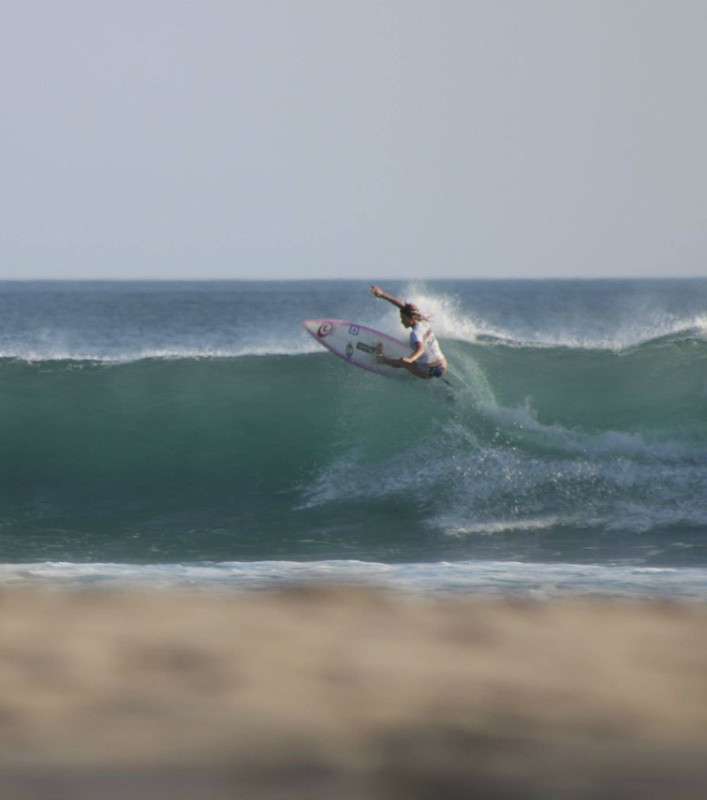 Baily Nagy, the winner of the US Open Junior division, was in my heat. 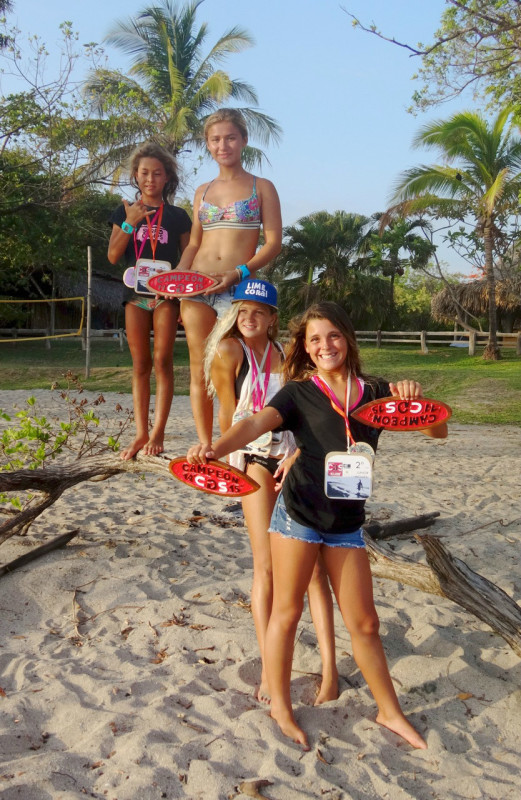 The girls in the junior division reminded me what surfing is all about.

I donned my contest jersey and as the green flag went up, I started paddling out, my nerves sparking and popping like water on a frying pan. I got a wave fairly quickly, my first proper wave at the break, made the drop, rode it for a bit, and fell. On my next wave, I was too deep, but I could see Baily dropping in front of me. Since I had priority, I fought for it, pumping hard to try and catch up to her. Farther down the line, I could see Baily making huge, fluid turns. Ultimately I couldn’t make it past the section, and got stuck behind the whitewater.

The red flag went up. Time was flying by, the heat was almost over. I sat inside of Zulay, saw my opportunity and paddled hard. I was very deep, and could see the wall rising up and bending in front of me. I went for it, turning sharply under the lip and getting a split second vision of the barrel before my board was sucked up the face and thrown over the falls. The wave detonated and exploded on top of me. My heat was over.

When I got out, I learned that Baily was penalized for going on my second wave, meaning one of her scores was halved. Her scores were so good, though, that she still won the heat and advanced with Zulay to the quarter final. I came in dead last. I didn’t even check my score; I knew it was laughable. But I was glad to have the experience and satisfied that I accomplished my two goals. 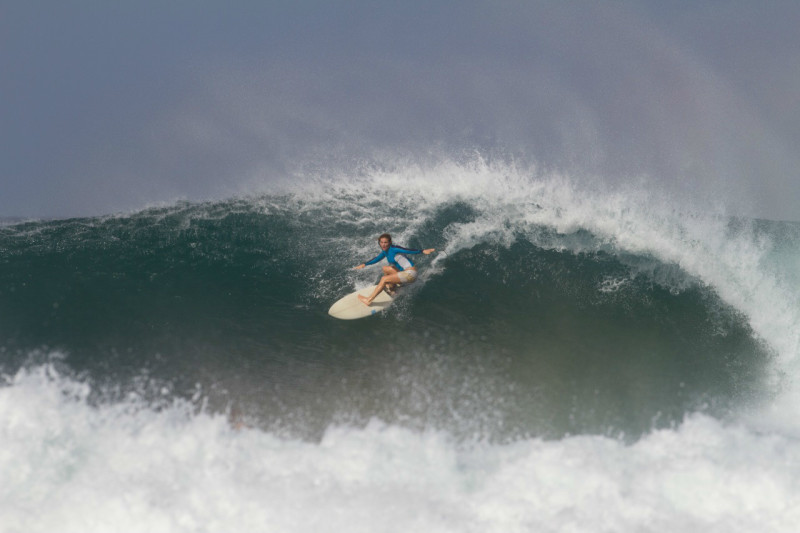 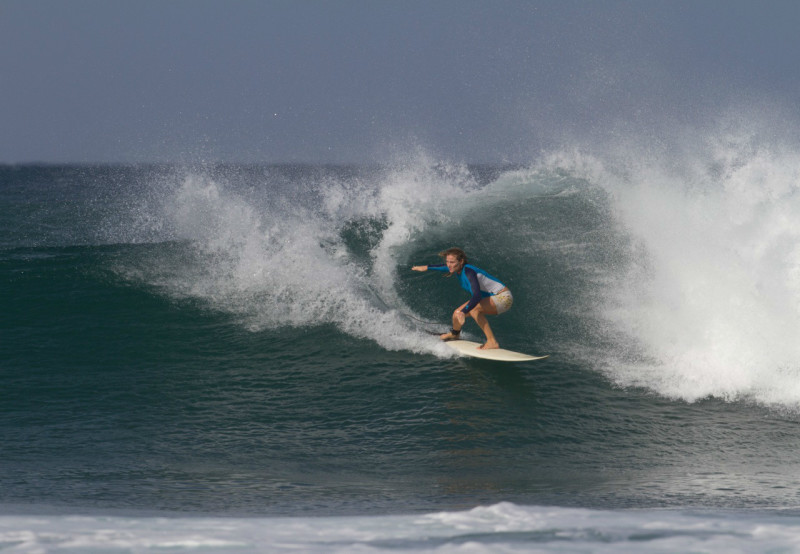 Aloe free surfing after the contest.

The final heat of the contest had just ended; everyone was packing up and clearing out. I paused, gazing hungrily out to sea, as the setting sun cast soft colors on the deserted lineup. The ocean was smooth as oil, a barely discernible offshore breeze tickling the tops of the waves, blowing them back like horses’ manes. I looked at Bob and saw understanding reflected in his eyes. “Go get a couple,” he said.

I burst into a smile, grabbed my board, and ran to the waters edge, paddling out rapidly in the fading light. I paddled for every wave I saw and got several in rapid succession. Then I paddled out farther to wait for a set. As I floated alone on my board, with no flags, no judges, no cameras, no fixed time limit, an audience of tiny, striped yellow fish darting playfully below me, a serene sense of calm and gratitude enveloped me. Sensations became subdued and intimate in the dim, muted light. The feeling was akin to being held in a womb, cushioned by pink, fleshy sky, suspended in warm, viscous amniotic fluid. It was the eve of Mother’s Day, and I silently honored my primordial mother, the origin of existence, the entity that humbles us all. In return, she birthed a perfect, gleaming set wave just for me.

I may have lost the contest, but I gained rewards much more valuable than any prize. A cup of humility, a stick of reverence, a tablespoon of friendship, and a sprinkle of magic. This is my recipe for humble pie. 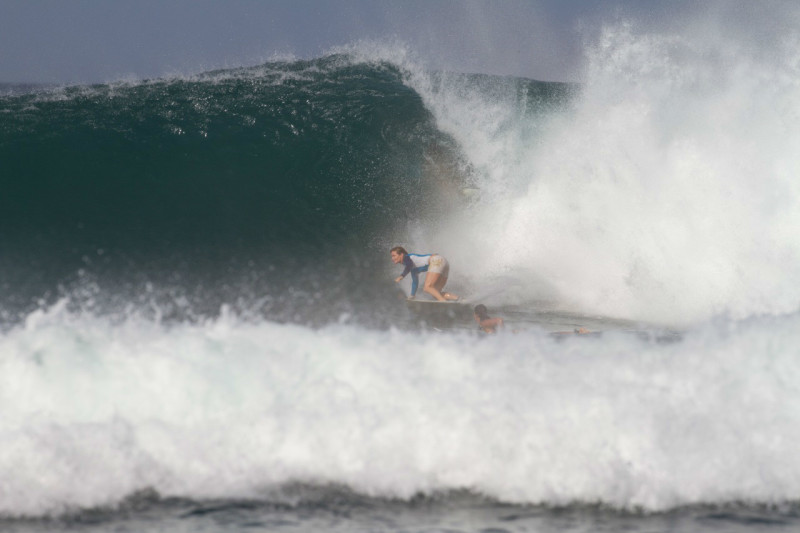 I may have lost the contest, but I gained rewards much more valuable than any prize.

Aloe Driscoll graduated from Santa Clara University with a B.S. in Biology. During April – September 2015 she traveled alone from Costa Rica to California by bus, surfing and writing about her experiences. Read more from the author at savilasurf.com and follow her @aloedriscoll on instagram.

View all posts by Aloe Driscoll