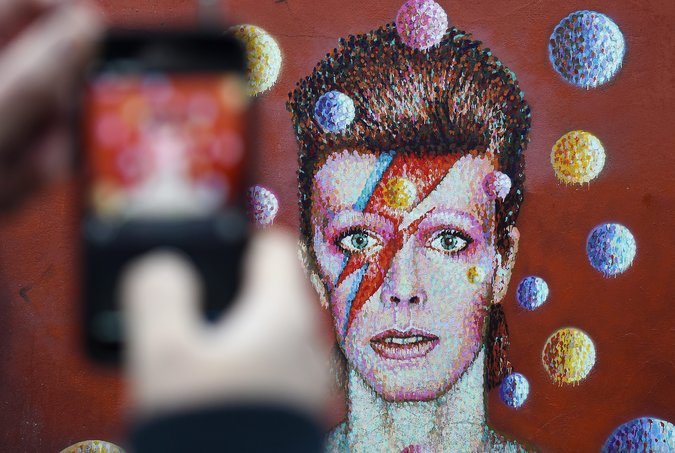 May 23rd 1973, the date forever impaled in the memory of a 16 year old boy. With a firm grip on the concert ticket in hand, he boarded the bright red double-decker bus that meandered its way to the Dome, a small concert venue located in downtown Brighton, England.

The bus approached its destination to see his first live concert, and began slow, just as the teenager’s heartbeat began to accelerate. Not waiting for the bus stop, he sped across the manicured grass ready in anticipation to see Ziggy Stardust, one of the most influential musicians of our time.

The stage curtain parted, the teenager became instantly awe-struck as he looked up at Ziggy strutting to the front of the stage donning a space suit, with flared shoulder pads, cherry platform boots, and sparkled jacket and pants, inspired by the artistic taste of the gangs from Stanley Kubrick’s “Clockwork Orange.”

David Jones was born in London in 1947, where in the late 60’s he changed his last name to Bowie out of fear of being confused with Davy Jones of The Monkees, David took the last name of Bowie, from American folk hero Jim Bowie a fighter in the Texas Revolution, who died during the defense of the Alamo, and who the “Bowie Knife” is named after.

He would motivate his musicians by telling them, to think Jimi Hendrix. He scribed lyrics about a star with a “screwed-down hair-do” who “played it left hand,” “jiving us that we were voodoo,” “who took it all too far,” “but boy could he play guitar,” how could anyone not have thought of Hendrix?

Bowie had a genius for continuously evolving, reinventing his music and his persona throughout the decades. Each album treated us all to find Bowie immersed in a different image , with a new sound to match his new look. From Major Tom the lost astronaut in “Space Oddity” to Ziggy Stardust the flamboyant rock star in 1972.

Bowie”s flair for the genius, brought to our world, gender-bending with science fiction, and reflections on fame, death and fashion. Strangely enough, the young man from Brighton, loved Space Oddity the most, as the idea of floating in space — even in a tin can — terrified him.

Rest in Peace, David Jones you will never be forgotten by the young boy.