Today’s Chestnut Street in downtown Santa Cruz, California is a quiet residential street, with the occasional passing of Roaring Camp’s Santa Cruz Beach Train filled with excited sightseers on a journey to the Santa Cruz Beach Boardwalk. However, a century ago, it was a bustling block brimming with foundries, warehouses, and other industrial activities.

When you visit Chestnut Street, look for the gate that closes off an old stairway that once descended from 133 Mission Street. Across the street from this secret pathway is the corrugated steel-sheathed Enterprise Iron Works, built by a former employee of the father of Santa Cruz, Elihu Anthony. 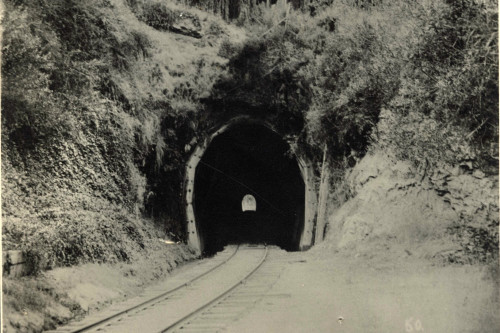 “Away We Fly Down Chestnut Avenue”

In the 1870s, the Mission Hill tunnel was created beneath Mission Hill, off the block of Chestnut Street. It was built under Mission to satisfy city businesses’ desire to keep freight trains from barreling through the Lower Plaza on their way to the wharves. Just outside of the tunnel was a passenger station . For arriving visitors, this intersection was their first view of Santa Cruz.

The first passenger trip through this tunnel travelled to Felton on October 14, 1874. One person’s account of this journey was described in the Santa Cruz Sentinel:

Read the entire blog post and hear about the first passenger’s journey through the tunnel, here at MobileRanger.com.

This piece is part of the Santa Cruz Mission Hill Stairway Tour made possible by local history researcher Linda Rosewood. Download the free app with many tours of the Santa Cruz area and beyond at MobileRanger.com.