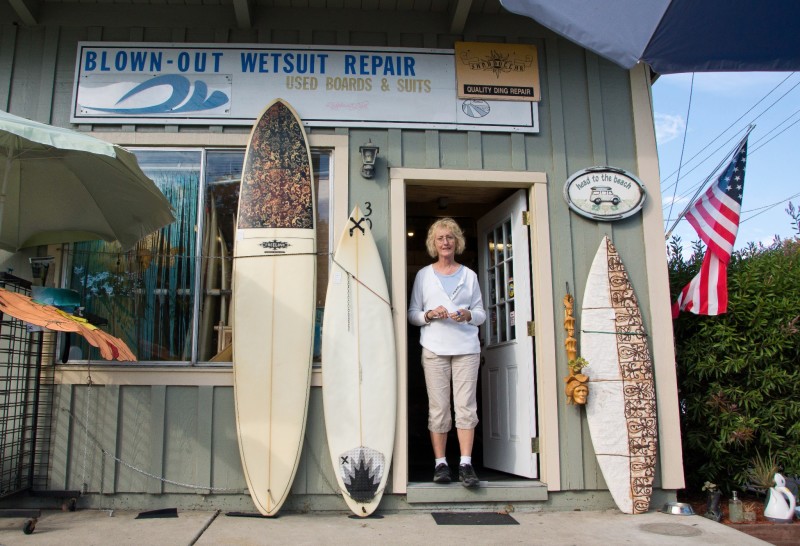 Let’s face it. Unless you’re a professional, being a surfer in Santa Cruz is not cheap.
The powerful waves can snap your $650 surfboard like a twig. And the freezing-cold winter conditions make a watertight, comfortable wetsuit a necessity, yet they have a tendency to fall apart quickly, especially if you don’t take good care of them. Repair services are crucial for keeping this lifestyle affordable, but while there are plenty of ding repair options out there, the same isn’t true when it comes to wetsuits. Luckily, one small Pleasure Point operation has us covered.

Blown Out Wet Suit Repair is the brainchild of Diane Berkhemer, who made wetsuits for custom wetsuit maker Christine Thomas before opening the shop in 2000. “After she left for Oregon and was done making wetsuits, she encouraged me to do repairs,” Berkhemer says. “I wasn’t excited about keeping the shop going but with encouraging friends, thought ‘OK, I’ll give it a try. If it doesn’t work, at least I tried.’”

Berkhemer grew up in Escondido, one of the oldest cities in San Diego County, where she and her now-husband, Don, would skip school regularly to hit the beach. “He’d pull up in front of the school with the old Velzy tied to the roof, honk the horn, and I would dash out the door and off we’d go,” she recalls.

“We would go wherever there was surf, even down to Mexico. No one ever knew where we were.”

While Don was surfing, Diane would spend her time on the beach, working on her suntan.

It wasn’t until 1991, when she and Don moved to Santa Cruz, that Berkhemer really got into surfing. She’d get up early to surf before going to work managing the Salvation Army on 41st Avenue. Unfortunately, some medical issues have taken her out of the water recently, but she remains positive. “I love the ocean,” she says, “so I watch others and love it through them.”

Originally, the shop consisted of two sewing machines, glue and neoprene. From these humble beginnings, Berkhemer developed a reputation for her affordable and effective repair talents. She learned the skills at an early age–coming from a single-parent household, new clothes weren’t a luxury. If she needed clothes, she had to sew them herself.

In the company’s early days, Berkhemer sometimes found herself needing to explain to customers that, as a repair hub, Blown Out wasn’t your run-of-the-mill surf shop. “Guys would come in each day and want to buy wax, which I didn’t have, and they’d say, ‘What kind of surf shop doesn’t sell wax?’” she recounts.
Eventually, Berkhemer began to let customers bring in their old surfboards and wetsuits to sell on consignment. From there the shop expanded to include local surf art, jewelry, and surfing necessities, including fins, leash strings, plugs, stickers and—yes—even wax. “There can be real treasures in consignments,” she explains. “We sell consignment boards and suits, vests, booties, kid booties with zippers, warm rash guards, as well as shorts and pants for stand up.”

Diane Berkhemer doing what she does best. Photo: Paul Topp

The shop is a much-needed source for selling and buying used items like these, giving first-time surfers and low-income families access to affordable surf necessities. “A wetsuit might fit great in a shop and when the person gets in the water they realize it doesn’t fit, and shops don’t take them back because they’re used,” Berkhemer explains. “Sometimes a person buys a board because someone else has really enjoyed it [thinking] they will really like it, [but] it ends up with us for someone else to try.”

It’s rare that Berkhemer finds a repair job too daunting to tackle. It’s handling customers that can give her the biggest headache. “Sometimes dealing with people can be a little frustrating,” she says. “They will bring in a wetsuit, soaking wet, full of sand and want to know if they can have it the next day.” If there is a way for a customer to fix a suit himself or herself, she has no problem instructing them on the methods and materials needed to do so.

Berkhemer takes pride in the shop and its value to the local community. “Over the years, we’ve watched the groms grow up, usually selling them their first wetsuit and doing trade-ins as they grow,” she says. “The surf community is a close-knit, extended family and we are there for each other.”