San Francisco surfers design suit they always dreamed of and sell direct online. “Multiple customers have reported back and said ‘this is the best wetsuit ever,’” says FERAL wetsuits co-founder Alex Salz. “That felt really good.” After surfing the Bay Area together for 20 years, Salz and FERAL co-founder Buzz Bonneau set out to make a better quality, more affordable wetsuit. “Most wetsuit companies offer 20 models of wetsuits and many features. The mix and match buffet is confusing. It pushes people to buy the most expensive suit out there or risk getting lower quality,” Bonneau says. “Why would you offer your customers the choice between a crappy suit and a great suit? Just offer the good one. 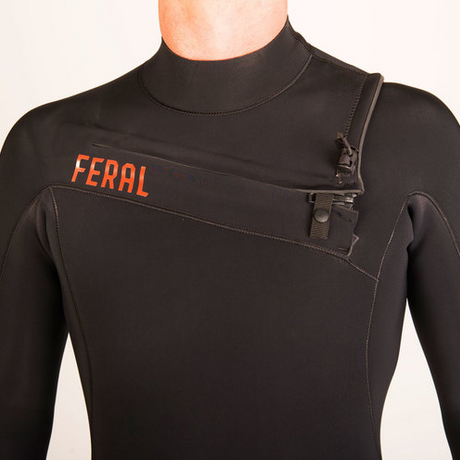 Bucking the trend, FERAL makes one wetsuit model in two thicknesses. That’s it.  The suit features Yamamoto Japanese neoprene, a material that’s 99.7% water impermeable (versus 60-80 percent for traditional neoprene.) They intentionally left out features like air bubble neoprene and fuzzy linings. The design boasts only half the number of panels of most high-end suits. The fewer the seams, the less opportunity for leakage.

“It’s better to not let water in in the first place,” Bonneau says. “That’ll keep you warmer than any add on materials.” “We focused the suit around your body movement while surfing. We placed the seams in areas that have the least amount of compression and expansion, since seams are the weakest area of the suit,” Salz says. The result is a suit that feels hyper minimal — and warm. The clean design is complete with a black on black color palette, with a type-based logo at the chest and thigh. When wet, the wetsuit weighs half as much as most competitors. “We keep hearing ‘is this actually 4mm thick? It’s so light and flexible, it’s hard to believe.’ I’ve heard that from a bunch from customers,” Bonneau says. 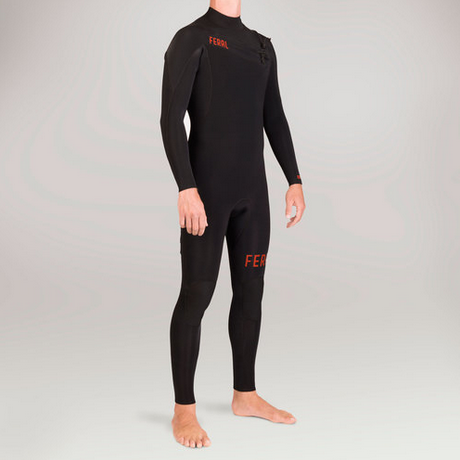 Bonneau and Salz designed a suit with top of the line materials, which would ordinarily push the cost into the $500+-range. But their goal was to build a better suit while keeping prices reasonable for the average surfer. The only way to do both was to skip the retail markup and offer the product direct to consumers FERAL ships their suits via free 2-day shipping. If the suit doesn’t fit, they send a free replacement. Still no luck? Customers can make a return for a full refund. Bonneau points out that wetsuit sizing is standardized across the industry, and if consumers can buy shoes online, a wetsuit shouldn’t be a problem. “Despite this perception that wetsuit fit is really specific, I’m a medium small in every brand,” says Bonneau, who stands 5 foot 7 inches. “We’ve only had one person send their wetsuit back because it didn’t fit. Everyone nails it on the first try.  The ship direct model allowed FERAL to develop a high-end suit at a mid-range price point. (Running the company out of a garage up Sloat Street doesn’t add costs, either.) The 4mm3 suit costs $395 and the 3mm2 suit is just $375. “The suits have everything you need and nothing you don’t. We didn’t cut anything because of cost. I think if someone said we want to offer you $1,000 for a wetsuit, we couldn’t make it any differently,” Bonneau says. “We cut out the middle man. Now everybody can get a pro deal,” Salz says.

About FERAL: A native of the Northern California coast, FERAL is dedicated to making the best wetsuits using the best materials, integrating only proven features with no marketing BS. We’re rethinking the way a surf brand works in our approach to both design and business, with a focus on delivering the best value to surfers everywhere. Simply put, our mission is to create wetsuits that are warm, light, flexible, and durable — products we think anyone who surfs will be