One month after a terrible injury while entering the water at Pleasure Point, surfer Glenn Harper reunited with the medic who happened to also be going surfing at the same time and helped to rescue him. On Tuesday, Nov 17, Harper and Johnson met at the site of the accident and shared this embrace. Photo by Shmuel Thaler. 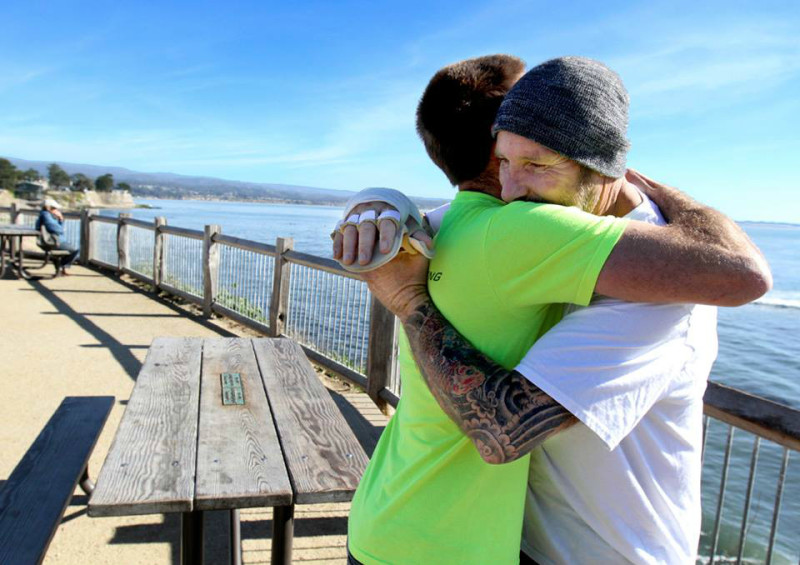 Just about one month ago, on Oct. 19, surfer Glenn Harper experienced a freak accident while carrying his longboard down to the beach at Pleasure Point—one that left his right hand impaled on exposed rebar and his left badly wounded as well, according to a Nov. 19 article in the Santa Cruz Sentinel. Harper, a 54-year-old resident of Soquel, was walking down the stairs at the point, his board slung under one arm, preparing to paddle into the line up. The tide was high, and when a wave rolled through it knocked him off balance, causing him to instinctually stick out his right arm. Unluckily for Harper, he leaned right into an approximately four-inch piece of rebar exposed from the sea wall, which puncture his hand. While attempting to free himself, his left hand was also badly injured, which required about 50 stitches. Within just a few minutes of the terrible accident, Eric Johnson, a 35-year-old former EMT from Pleasure Point, happened to be headed out to surf with his friend. After spotting Harper in distress, Johnson helped to free Harper from the sea wall and bring him to safety. At a picnic table near East Cliff Drive, Johnson wrapped Harper’s hand in a towel to stem the blood loss as they waited for help to arrive, according to the Sentinel. That’s some noteworthy synchronicity, that a person with a medical background would stumble across the scene.

“I’m around the corner and no one can see me,” Harper stated, “and the first person that walks up—the guy’s an EMT.”

Harper was taken to Santa Clara Valley Medical Center for treatment. A fund has been set up that will help to pay for his medical bills. Donations can be made here.