Can Save Our Shores’ new executive director help create a shift in the way our economies function?
By Joel Hersch 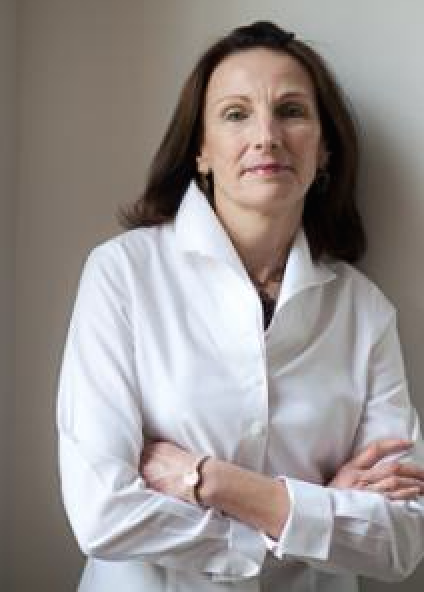 For the past six months, the local ocean advocacy organization Save Our Shores has been without an official executive director, until now. In early October, the nonprofit brought on board a new captain to steer the ship—former sustainability consultant and founder Circular Economies Strategist, Katherine O’Dea.
O’Dea, who relocated from Rhode Island and took on her new role as executive director on Oct. 1, was most recently working with Fortune 100 and Fortune 500 companies on ways to rethink and restructure commercial production.
“My job was trying to get companies and everyone who comprises our global system of commerce to stop thinking about things in a linear way,” she says. “We take resources, make something with it, use it—often for a very short time—and its end-state is in a landfill. It’s a linear process that ends with huge amounts of waste.”
It is this economic system that ultimately contributes to massive quantities of refuse washing up on our beaches and into our oceans, especially plastics, which instead of decomposing, simply breakdown in the sun into smaller and smaller pieces—a process known as photodegradation.
According to the Ellen MacArthur Foundation, which aims to raise awareness about circular economies, the circular economic system is restorative and regenerative by design, and aims to keep products, components, and materials at their highest utility and value at all times.
“A circular economy thinks of things in a closed loop system,” O’Dea explains. “It builds things that are designed to last for a longer time and are more durable, and produce minimal waste as products and materials would be recovered for reuse, remanufacturing, repurposing or recycling. Therefore, the opportunity to leave trash on the shoreline would significantly diminish and eventually disappear.”
While the shift may seem obvious from a sustainability perspective, the forces that drive our predominantly linear economy—buy, use, upgrade, and buy again—are powerful fixtures with big money securing the consumer model.
O’Dea points to the iPhone as a classic example of a fixed linear economy: “It’s designed for obsolescence,” she says. “They want you to buy the next version within six months to a year, and it’s very difficult to get into the device to replace parts.”
Though she does note the phone company’s take-back system, which is helpful, but fails to limit their massive rate of continuous production.

Focusing on the Bigger Picture
Much of Save Our Shores’ activity in the public eye is their work organizing volunteers for extensive beach cleanups, which is great for raising awareness about the issues, but O’Dea says she intends to direct the organization into making a difference on the larger, more systemic scale. Her plan involves reaching out directly to the companies whose economic models are contributing to trashed beaches and creating partnerships to help them shift into more sustainable, less environmentally-damaging models.
“I want to ramp up this program, going to the companies upstream, beyond Santa Cruz and Monterey,” O’Dea says. “We want to be more proactive and more restorative while still doing beach cleanups, but the fact is the cleanups are more about treating the symptoms—reacting to trash—rather making a change at the source.”
She says she is very interested in making contact with the industry players in Silicon Valley, where many products incorporate plastics and polymers.
“We need to be really careful with products that use plastics,” she warns. “We need to know where those materials are going. Whether it’s plastic packaging or cell phones, too often they get into the environment, wash out through our waterways and end up in the ocean, and that’s why we have the situation that we do in our gyres today.” (The North Pacific Gyre, a meeting point of ocean currents, contains roughly 3.5 million tons of trash, 90 percent of which is plastic debris, according to our Santa Cruz Waves article “Plastic Soup,” published last July. Each year, approximately eight million metric tons of plastic litter makes its way into the ocean, where it will eventually drift into one of five gyres around the planet).
“And, as we’re finding out lately, as those plastic particles break down in the ocean, they are being consumed by marine life and are working their way up the food chain—into our food,” O’Dea says. “You could almost say we’re eating our cell phones.”

The Next Big Step
O’Dea says that her goal over the next five years is to double SOS’s impact in every aspect of what they’re known for, but that what she really has her mind set on is the organization’s next major opportunity to improve or protect the quality of the ocean and our coastline.
It was almost 38 years ago, in 1978, that Santa Cruz community members created a grassroots movement to protest the placement of offshore oil rigs along the Central Coast—the start of SOS.
“They accomplished that, and that’s a big deal,” she says. “If it weren’t for that movement, it could have looked more like the Gulf Coast here.”
About a decade later, from 1988 through 1992, SOS was instrumental in getting the Monterey Bay designated as a National Marine Sanctuary, another major milestone for the organization.
“My goal is to look for what the next big thing is that will have that kind of impact,” O’Dea says. “I’m looking for that next milestone.” But, she says, it’s too soon to say what that is.
As for her work advocating for healthy oceans, she says the ocean is where she belongs.
“I’ve always lived on the coast, and the ocean is where I feel I have to be connected to,” O’Dea says. “It’s something I’ve always felt in my heart and soul, so working on ocean and coastal conservation feels like exactly where I should be in my life right now.”

To learn about volunteer opportunities with Save Our Shores, click here