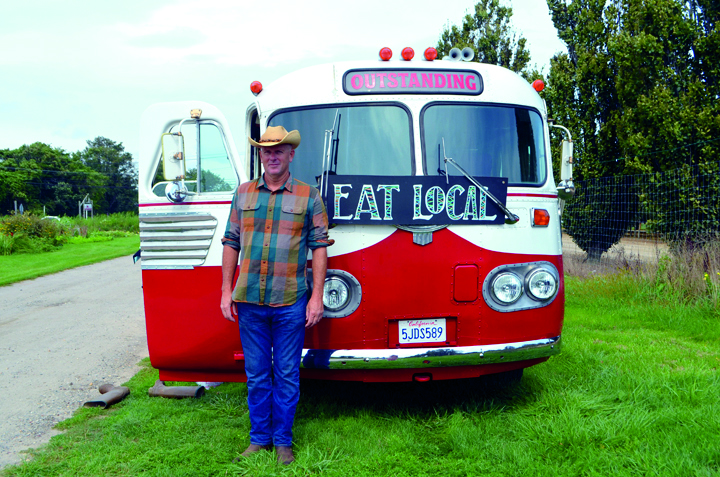 Artist and chef Jim Denevan’s well-known Outstanding in the field farm dinners are the focus of a documentary by the same name. Photo: Courtesy of Patrick Trefz

Patrick Trefz is one of the busiest Santa Cruz filmmakers around, but he still manages to find solace in soil. “I just got out of the garden [where I was] trying to do some digging after being inside editing,” he tells Santa Cruz Waves. “I had to step outside and clear my mind, and seeing organic vegetables grow is really important.”

Life imitating art, the award-winning director’s latest project is the farm-centric Outstanding in the Field, a cinematic endeavor exploring Jim Denevan’s passion for organic food, alongside his art and surfing (the documentary also touches on the 53-year-old’s upbringing as a Pleasure Point surfer).

The movie, which is slated to hit the festival circuit this fall with a wider theatrical release to follow, tracks the eminent land artist and chef in his other role as founder of Outstanding in the Field touring farm dinners. The elaborate events sit foodies down with organic farmers, world-renowned and regional chefs, fine wines, and boldly produced table settings in outdoor locales. Trefz calls Denevan “a conductor or a director because he curates these dinners”—a feat he’s been pulling off for 15 years as a pillar in the farm-to-table movement. Motivated to reveal how much his friend strives to push the envelope, Trefz—better known for his surf photos and films—says this time he wants to show audiences “the creative genius of Jim and the amazing depth that goes into his mind.”

“He challenges himself to try to make something that is totally new and not nostalgic by any means,” Trefz says.

With his partner, co-producer Christie Jarvis, Trefz traveled across the country and to Canada over the past two years to capture Denevan’s mindfully created culinary affairs in action. Doing the work of a five-person crew, the two filmmakers were swamped with filming, interviewing, downloading and editing on the go. And despite the subject at hand, they didn’t indulge in upscale locavore feasts as much as you’d think.

“We didn’t get to eat at the table because we were filming,” Trefz begins. “It was tough when we’d see the best locally sourced food that you could possibly get, and then sadly enough we’d end up eating at some fast food joint in the middle of the night.” The lesson? “We did learn from our mistakes and were able to source from farmers’ market stands to pack the cooler,” he adds with a laugh. 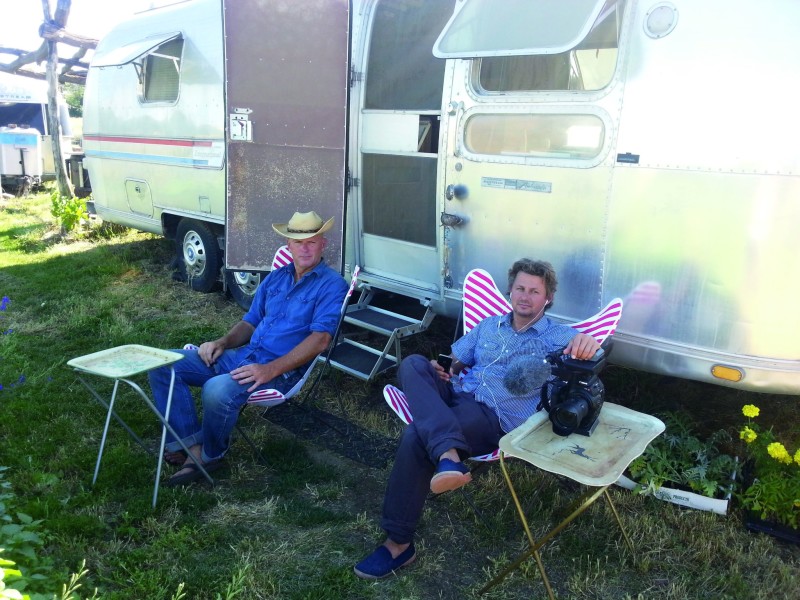 The documentary showcases five distinct farm-fresh dinners outstretched in gorgeous settings that made for a cinematographer’s dream. And, like Denevan’s land art, they were blissful community experiences meant to make lucky participants live in the moment; the time it takes him to put up and take down a dinner is the same time it takes him to craft his celebrated sand murals that get washed away by the tide.

Still, Outstanding in the Field isn’t as much a food-focused film as it is about Denevan’s interaction with diverse people and places, and the creative solutions needed in ever-changing conditions—much like, Trefz says, you’ll find in a surf documentary.

A dinner at Brooklyn’s Grange Farm served up an 11th floor rooftop meal at the historic Navy Yard. This section of the movie includes helicopter-culled footage of Manhattan and the new World Trade Center, as well as of the sprawling dinner situated on the city-skyscraper farm overlooking the East River.

With many households brandishing his framed (and famed!) surf photography and films, Patrick Trefz is a maestro of both mediums. But if you dare ask him to choose which he prefers, the esteemed photographer/filmmaker admits the art of the moving picture is, well, more moving: “I think there’s a lot more depth to making a film versus a photobook,” he says. “I feel the discipline of filmmaking involves all arts—you’re dealing with the scriptwriting, the soundtrack, the pacing of the film, the artwork, all the visuals, the filming and the interviews. Even though I love taking photographs, making a film is a lot more multi-dimensional.” One of the biggest challenges Trefz faces in his favorite artistic process may surprise you: “Music is one of the toughest things,” he says. “Getting rights and such for a soundtrack can be difficult.”

At this dinner in Santa Cruz County, guests were splashed at high tide and the late Shawn
“Barney” Barron provided additional visuals by surfing the beach break just beyond the feast.Learn more at outstanding.assemble.me.