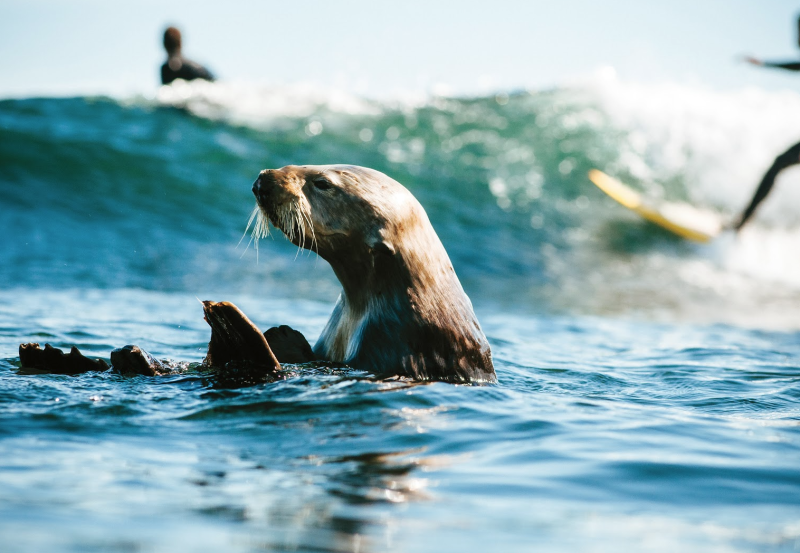 The No. 1 killer of sea otters in the Monterey Bay isn’t human-caused pathogen pollution in the
water, harmful algal blooms, or domoic acid (which are all also problems for the furry critters). It
is great white sharks.

The Southern Sea Otter population has suffered a series of setbacks over the years, and the great white attacks present a threat to their delicate population. A report released in August by marine biologist Tim Tinker, the U.S. Geological Survey’s otter expert and a UC Santa Cruz adjunct professor, shows a dramatic increase in shark attacks over the last 10 to 15 years.

Marine biologists have collected nearly 2,000 otter carcasses since 1985 and observed a sharp
increase in shark bites since 2003. Tinker says one hot spot of these attacks is off the coast of Aptos, near the Cement Ship. The area is known for its smooth, sandy bottom and lack of thick kelp canopies where otters can rest and hide from predators. “The sharks aren’t eating the otters,” explains Tinker. “They’re biting
them and spitting them out.” (Great whites prefer more blubbery meat and less dense fur, he adds.) Scientists say it’s unclear exactly why sharks are targeting otters, but attacks on seals are also increasing. Efforts to protect marine mammals have led to an abundant food source for the sharks, and that may be why they’re more likely to swim in near-shore water.

What can you do?

Animal advocacy groups like Carmel-by-the-Sea-based nonprofit Friends of the Sea Otter are trying valiantly to protect the favorite sea dweller. While Tinker says there is nothing that can be done to curb the shark-attack problem, specifically, there are measures that can be taken to bolster the sea otter population overall, and that will in turn make the issue of shark attacks less detrimental. Advocacy Program Director Jim Curland says one way locals can join the conservation effort is by keeping garden areas free of pesticides and poisons that can run into the Bay. Another is to support legislation and funding efforts like the California Sea Otter Fund, a state-run program that contributes money to the California Department of Wildlife, and which Gov. Jerry Brown recently renewed for the next five years. That’s as simple as checking the box that appears on your state income tax form. Since 2007, the Sea Otter Fund has generated approximately $2 million in revenue to help protect the Southern Sea Otter.