“My friend was like, ‘What the heck was that? I never heard that sound in my life. We need to see what it is,’” Joey Fortina, 22, of Ben Lomond recalled his friend Cody Rodebaugh of Felton saying.

Following their ears, the chirps grew louder into yelps and cries as they searched for the source. They spotted a little otter pup all alone in the open sea. The whiskered creature dog paddled furiously, desperate to keep its head above water.

“It was kind of sad at first,” Fortina said. “But it was also the cutest thing we’ve ever seen.”

They quickly cast a net, pulled the tiny fur ball into their boat and wrapped it in a sweatshirt, which the pup happily snuggled into, Fortina said. 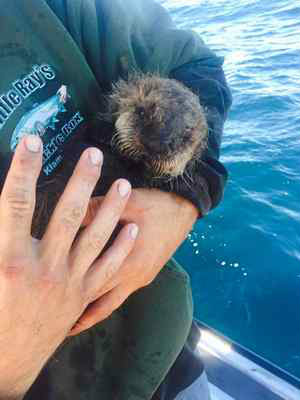 Fisherman Cody Rodebaugh of Felton holds a baby otter pup that he helped rescue on Sunday and that was later euthanized. (Joey Fortina — Contributed)

They then called the Monterey Bay Aquarium to help rescue it. Touching an otter, even getting close enough that you alter its behavior, is a violation of the Marine Mammal Protection Act.

The aquarium, which rescues about 50 stranded otters or abandoned pups each year, got permission from U.S. Fish and Wildlife for the men to handle the otter. They gave it to the aquarium’s rescue crew at the Santa Cruz Small Craft Harbor at noon.

Later that night, however, the aquarium euthanized the pup.

“It was unfortunate, but we also knew the animal’s prospects were not good at all,” said aquarium spokesman Hank Armstrong. “We also had just gotten two other pups in the Paso Robles area, one is 6 weeks old, one is 1 week old. We only have the capacity to handle so many.”

The rescued sea otter weighed about 3 pounds and was 3 days old.

“It seemed super healthy, and once we pulled it in, it was super happy,” Fortina said. “But it was super young and couldn’t even hold its head up. That’s a bummer to hear it was euthanized.”

Young sea otters that are rescued receive around-the-clock care at the aquarium, which says it is the only organization in the world that takes in orphaned Southern sea otter pups with the intent of releasing them back into the wild. Others rescue adult otters. Lacking independence, sea otter pups depend on their mothers for months.

The aquarium usually pairs pups, which are born year-round, with a surrogate otter mother so they learn the necessarily skills to survive in the wild and don’t get attached to any humans.

“We get stranded pups every year,” Armstrong said. “It happens more often in the winter season when the storms swell and pups get separated from their mothers or the mothers get attacked by white sharks.”

Southern sea otter population in California is slowly recovering. The population is at 3,054 this year, up from 2,944 last year, according to the U.S Geological Survey. For the otters to be considered for removal from threatened species listing under the Endangered Species Act, its numbers have to exceed 3,090 for three consecutive years.