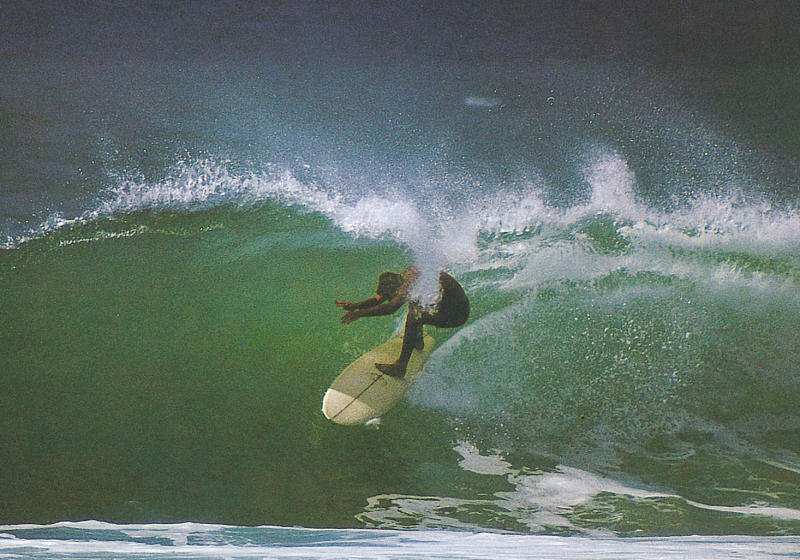 California surf legend Billy Hamilton looks back on the spontaneous encounters that changed
his life. By Neil Pearlberg

Recently, one of surfing’s most beloved characters quietly slipped into Santa Cruz for his once-a-year pilgrimage to Freeline Surf Shop on 41st Avenue—his mecca being, more specifically, the shop’s board-shaping room. I found Billy Hamilton using an air compressor to dust fiberglass shavings off the big-wave board he was crafting, as well as off of his overalls and beloved San Francisco Giants baseball cap.

Best known as a three-time winner of the Duke Kahanamoku Invitational Surfing Championship and the father of surfing icon Laird Hamilton, he surfed his way to wild popularity in the ’60s and ’70s with the debonair Hollywood looks of Robert Redford and the cool-hand style of Paul Newman. Our shaping room chat took a retrospective turn, with Hamilton musing over his 60-year love affair with the ocean and surfing. Amid all of the accomplishments and adventure, he has two single moments that stand out among the rest, and which he considers his life’s personal highlights.

The first came the day he was endorsed by the Duke Kahanamoku himself. The year was 1967, and Hamilton was about to finish his heat in the Duke’s surf championship contest. Kahanamoku’s then-manager, Kimo Wilder McVay, strode down the North Shore of Oahu’s Sunset Beach, sharply dressed from head to toe in white, to greet Hamilton at the water’s edge and said, “Billy, somebody wants to meet you!” Hamilton looked down and chuckled as water and sand began to fill McVay’s shoes. “Who?” he asked. McVay did not answer; he simply turned and headed toward the top of the beach. With his surfboard tucked under his arm, Hamilton followed the greeter to the roadside, where he saw Duke Kahanamoku’s well-known limousine parked, the tinted rear window partly lowered. He turned to McVay: “The Duke really wants to meet me?”

Hamilton peeked into the open car window and caught sight of Duke’s long legs just as McVay said, “Duke, this is Billy Hamilton!” What came next shocked the young blonde surfer. “I extended my hand to introduce myself,” says Hamilton. “It was swallowed up by a hand so big that it felt like he was wearing a baseball mitt.” As Hamilton peered into Kahanamoku’s intensely dark eyes, the unexpected admirer said, “It’s very nice to meet you. I appreciate your surfing very much. You surf like an ocean bird. You are my favorite in the tournament. Good luck to you!”

“I had just been crowned by the Duke himself,” says Hamilton. “That moment left me stunned,
knowing that I had done it all.”

Still reeling from those words, bestowed upon him by a legend of the highest order, Hamilton returned to his heat, where he graced the crowd with his surfing prowess. He raised his hands like Jesus giving the Sermon on the Mount and danced in rhythm across his surfboard, all the while mastering his sublime front-side cutbacks. He came in second place, behind Jock Sutherland. 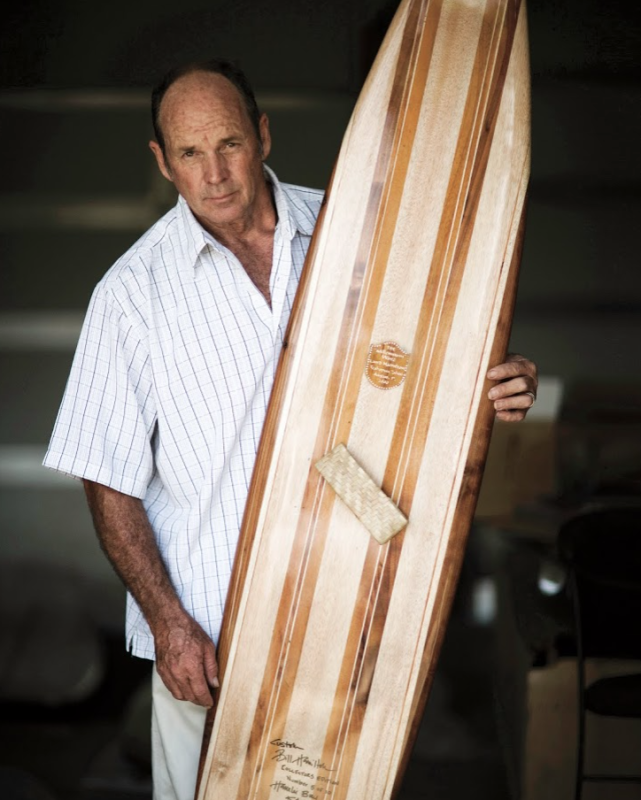 Hamilton experienced his other defining moment that same summer. He was living on the North Shore at Pipeline while shooting the surf movie Free and Easy, which he starred in with Hawaiian surfer David Nuuhiwa. One day, Hamilton strolled down the beach to meet with the film’s directors, Greg MacGillivray and Jim Freeman, who were staying down the way at Rocky Point. On his walk, Hamilton spotted a small boy in green trunks swimming alone in a sheltered area beside the reef, trying desperately to catch waves.

Children were scarce on the North Shore—the then-barren and rugged landscape was not frequented by families. Seeing this young boy playing alone prompted Hamilton to ask what he was doing.

Laird’s answer was, of course, yes. Hamilton waded into the ocean with Laird, instructed him to hang onto his neck, and they swam out to the edge of the reef, where they caught wave after wave. “It was like I had shown him another part of the world, a new playground,” says Hamilton.

Upon returning to the beach, the child grabbed Hamilton’s hand, looked up at him, and said, “I want you to be my dad!” To appease him, Hamilton replied, “OK.”

Hand in hand they walked along the beach, arriving at the front door of the Rocky Point beach house. As the door slowly opened, Hamilton’s life was poised to change forever. “She was the most beautiful brown-eyed woman, with dark brown flowing hair that shone in the afternoon Hawaiian light,” Hamilton says of the woman who opened the door. “Mom this is Bill,” said the boy, “I want him to be my dad.” Not long after, Bill, indeed, became Laird’s father, and Laird took the name that would go on to become famous the world over: Laird Hamilton.

Today, the elder Hamilton is still surfing, and he’s also shaping highly in-demand hand-made boards. “Not only is he an incredible surfer,” says his friend of 45 years and owner of Freeline Surf Shop John Mel, “he is also a world-class shaper.” Hamilton enjoys both activities while visiting Santa Cruz, where he can be spotted in the water and has worked on big-wave boards made of 2,800-year-old redwood.

“I love the surf in Santa Cruz, especially at Pleasure Point, where it is a venerable buffet of breaks,” says Hamilton. “I have had a chance to surf them all, from Rockview to Private’s, and have really enjoyed learning the idiosyncrasies of each.”