Whales off the California coast are becoming increasingly tangled in fishing gear. What’s being done about it?
By Joel Hersch 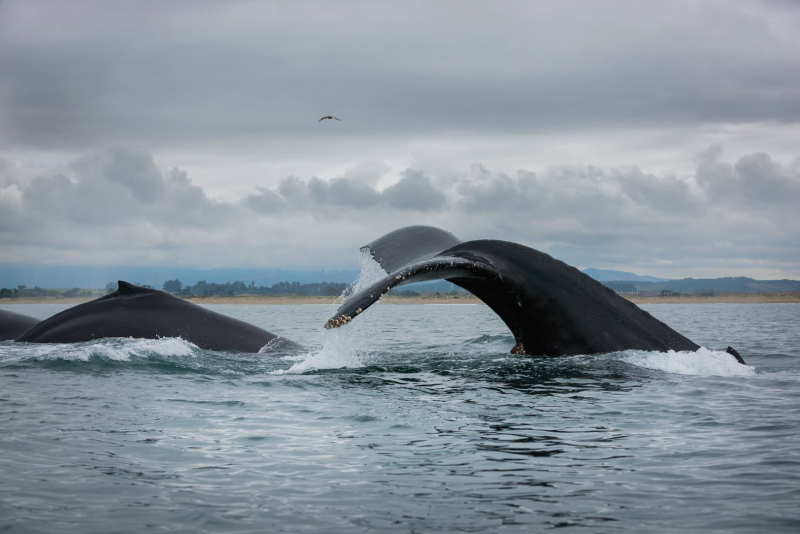 Whale activity in the Monterey Bay has been unusually high in recent months. Photo: Neil Simmons

All along the West Coast, the number of whales becoming entangled in commercial fishing gear is spiking. These entanglements can mean months of agony for the whale, in which time fishing gear can twist around their jaw, under and around their fins, or cinch tightly around their fluke. Without human intervention, these scenarios often lead to deep cuts, slow, excruciating amputations, and eventual death. The most common species of whale to fall victim to fishing gear entanglement, as well as the
most complicated to liberate, is the highly migratory humpback, which weighs in at 50,000 to 80,000 pounds and grows up to 60 feet long. The primary culprit in these predicaments is the
crab pot line.

The task of disentangling the giant creatures from their accidental binds is an intensive and risky
operation that requires getting close enough to assess the points of entanglement and cut it free without causing more harm to the whale or getting any humans killed in the process, explains Pieter Folkens, a marine mammal expert and lead entanglement responder covering Northern California. Folkens, who also supports Southern California and Alaskan response teams, operates under a permit from the National Oceanic and Atmospheric Association (NOAA), which oversees the country’s aid effort for snarled whales. Disentanglements are conducted from an inflatable zodiac, require detailed strategy, and can sometimes involve hours or even days of being towed by the frightened leviathan—a rollercoaster ride that disentanglement teams call a “Nantucket sleigh ride” (see the sidebar on page 55 for more on that). Having evolved for almost nonstop long-distance migration, these animals move through the
water with tremendous power.“When you’re approaching one of these whales, and you realize their size, the hairs go up on the back of your neck,” says Folkens. “It’s a 40-foot, very scared, oftentimes pissed-off animal, and you can feel that power when you get close.”

By August of this year, there had been 65 confirmed reports of entangled whales in California, Alaska and Hawaii, according to a training presentation by Folkens.This included 35 reports in California, with 31 confirmed, and 20 reports of humpback entanglements in the Monterey Bay, 18 of which were confirmed. That’s according to NOAA’s Whale Disentanglement Coordinator for California, Justin Viezbicke, a wiry-framed surfer with a reputation for handling these rescues with a cool head. One August evening at the Monterey Bay National Marine Sanctuary Exploration Center in Santa Cruz, Viezbicke told a crowded room that the quantity of entanglements has increased sixfold in recent years in his response region, which stretches from San Luis Obispo to Oregon. And, he says, for every entanglement that’s reported, many more are missed.The reason for this uptick in humpback entanglements is multi-faceted. For one, the humpback whale population is thriving. In 1966, when their numbers were so low researchers were lucky to see one on a given outing, humpback whaling was outlawed in U.S. waters. Prior to 1905, their numbers in the North Pacific were estimated to be 15,000, but due to whaling, that figure was down to 1,200 the year killing them become illegal, according to the National Marine Fisheries Service (NMFS).

Viezbicke also cautions that it’s very difficult to get bulletproof data on quantities of entanglements due to his suspicion that people are getting much better at identification and reporting, which can account for higher numbers. John Calambokidis, a senior research biologist and co-founder of the Cascadia Research Collective in Washington, says that the humpback population along the West Coast in the early 1990s was as low as 500. Today, the population in the same region is estimated to be closer to 2,000. A photo-identification study by the NMFS from 2004 to 2006 estimated the abundance of humpback whales in the entire Pacific Basin to be 21,808.

The increase has been so great that NOAA has even proposed removing humpbacks from the endangered species list. Humpbacks are known for eating both krill and small fish, both of which they seek out in the Monterey Bay. When the whales feed on fish, they move closer inshore, where crab fishermen set their pots. It is in these near-shore environments, where there is much more overlap with the fisheries, that NOAA has documented the increase in entanglements, Viezbicke says. “We have more whales in the Monterey Bay, they’re staying in the area longer, we’ve got increased fishing pressure in the Bay, and we have much better entanglement reporting, which we think is contributing to the higher numbers, as well,” Viezbicke says. Folkens says that crab fishing in California has been increasing in recent years, which means more pots in the water during times of high whale migration.

“A number of large [crab fishing] operators out of Oregon have come down into California, where there have traditionally been smaller operations, and these guys put out pots that create a gauntlet, making it very difficult for the animals to get through,” Folkens says.

Crab fishermen tend to set their crab pots in the same areas that whales frequent, such as along the edges of the Soquel Canyon, for the very same reason the whales are there in the first place: there is a vibrant ecosystem on which to feed. “The humpback whales come in to feed on the anchovies and krill, which are part of the whole upwelling system,” Folkens says. “Crabs are pretty interested in all of that, too.”

A key issue that can lead to entanglements is slack in the crab pot line leading from the ocean floor up to a buoy on the surface. Fishermen have to maintain some slack in the line to account for tidal change, but that often leaves slack length in the water column that whales can accidentally make contact with. “So, when the whales are lunging at their prey species and they encounter this loose line in the water column, it gets caught across their mouth,” Folkens says. “Then they freak out and start
twisting, and it wraps around all their body and then around their tail.”

Justin Greenman, Viezbicke’s assistant at NOAA, says that the California Department of Fish and Wildlife and other state agencies are very aware of the increase and are working closely with NOAA to devise solutions to the problem.

In addition to educating oceangoers on what to do if they identify entanglements (maintain a visual of the distressed whale and report the situation), Viezbicke says that an important strategy has been working with the fishing industry. He says that a large community of commercial fishermen has been eager to cooperate and be proactive on figuring out ways to prevent these entrapments.

One strategy—“extending an olive branch,” Viezbicke calls it—has been to return the fishing gear that response teams recover off of entangled whales. It’s a way to make contact with fishermen and appeal for closer collaboration.“We do try to get the gear back to the fishermen and really cultivate that relationship. They help us figure out things like how long a whale has been entangled. And we’ve gotten some of these guys who are out on the water all the time to actually be on our whale entanglement response team,” Viezbicke says. “We’ve had fishermen not only get involved with the disentanglements
but also the evaluation of the whale and helping us to better determine how it’s actually happening in the first place. They really are trying to work with us and find solutions.”

The general public—that’s you—can also help by keeping an eye out. To report an entangled whale, call NOAA as quickly as possible at 877-SOS-WHALE. 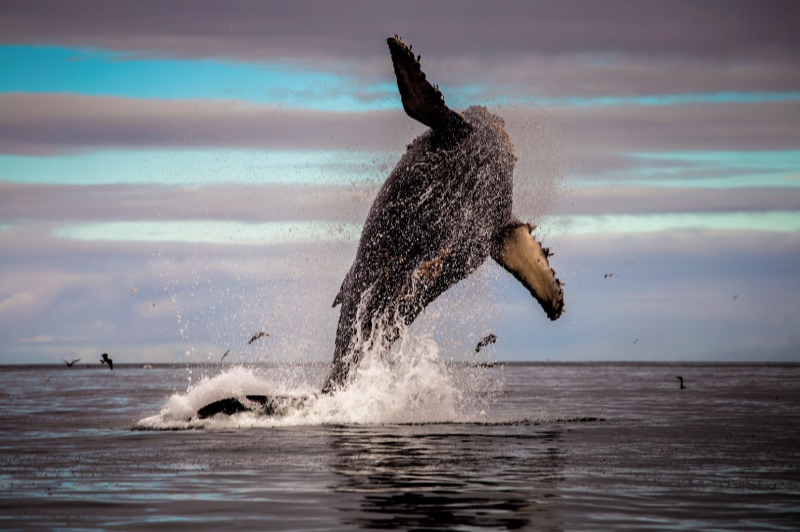 When NOAA disentanglement teams respond to a tangled whale, they often have to attach their boat to the whale while they assess the jumble and work to undo the lines. Naturally, a humpback becomes more distressed when contact is made and will attempt to swim away. This can result in the rescuers being towed wildly for days on end. The experience is called a “Nantucket sleigh ride,” a phrase that originates from the small-boat whalers of Massachusetts who, after harpooning a whale, would be taken on a rough ride that could reach speeds up to 23 miles per hour. Thankfully, the new use of the phrase involves trying to save the whale rather than kill it.

Humpbacks are among the most difficult whale species to disentangle. Pieter Folkens says it’s not uncommon for them to attempt to smash disentanglement rescue teams with their enormous fluke.

The first step in rescuing an entangled whale is spotting it. However, if the initial viewer leaves
or loses the whale, the likelihood of relocating it is slim. “If someone goes out for a morning fishing trip, and then comes back that afternoon and lets the harbor master know they spotted an entangled whale, too much time has elapsed for us to be able to do anything,” says Pieter Folkens, the lead entanglement responder in Northern California. “What’s important for us is that we get ocean users, whale watchers, fishermen and recreational boaters to call us immediately when they see an entangled whale so we can act fast.”

NOAA has devised a very effective network in the Monterey Bay among whale watching boats and fishing operators. When one vessel identifies an entangled whale, they report it and stand by. That boat will hold the line of sight until another boat can take over and maintain a constant view until responders arrive. In August, whale-watching charter boat Sanctuary Cruises spotted an entangled whale, then handed off the line of sight to Fast Raft Boat Tours, who then handed the responsibility off to Blue Ocean Whale Watch. “We have them watching it for maybe a half hour each,” Folkens says. “Once we get there, we put a satellite telemetry on the animal so that we can track its movements over time, then we do an analysis to understand the nature of the entanglement. Is it the mouth, is it the flukes, does it
involve the flippers? And then we get down to the disentanglement.”

The number of confirmed whale entanglements is up in the Monterey Bay and along the whole West Coast. This may be, in part, due to more whales feeding in the Bay for longer periods of time, oftentimes closer inshore where crab pots are set. There is also an increase in commercial fishing in the Monterey Bay. Another factor is a better system for reporting the entanglements and better education outreach programs, increasing the likelihood that an oceangoer makes a report in the first place, according to Justin Viezbicke, of NOAA.

Humpback whales migrate almost constantly in their search for food. The West Coast, especially the Monterey Bay, is a major feeding destination for the animals. They frequent the Bay normally between April and October, when they are often visible from the coastline. Based on a recent tagging study by Cascadia’s Research Collective in Washington, humpbacks will travel from the Channel Islands in Southern California up to the Cordell Bank National Marine Sanctuary, just north of San Francisco, several times in a single summer.