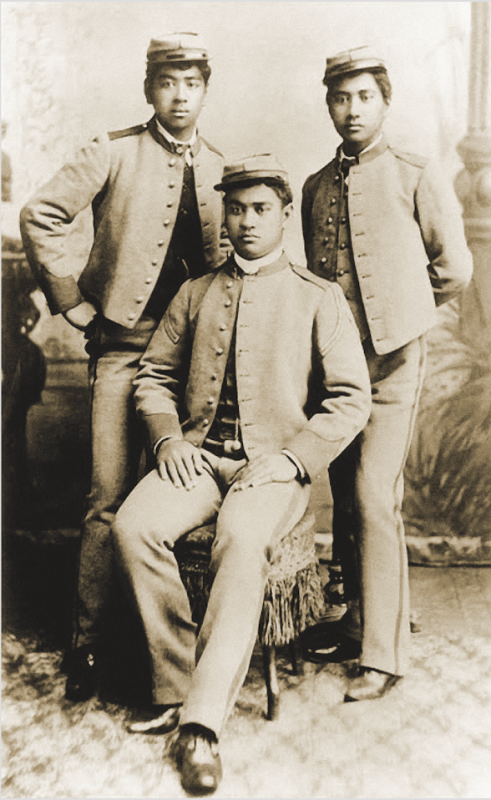 On Sunday, July 19, 1885, nearly 30 years before Duke Kahanamoku popularized surfing in the mainland United States, three teenage brothers rode long redwood boards into the waves at the mouth of the San Lorenzo River in Santa Cruz.

These were no ordinary boys—as nephews of King Kalakaua, they were true Hawaiian princes. And the boards they rode were equally extraordinary: milled of first-growth local Santa Cruz Mountains redwood by the Grover Lumber Company, they were “o’lo” boards, a long, heavy shape reserved exclusively for Hawaiian royalty. The Hawaiian princes soon returned home after their well-documented turn as the first surfers in the continental United States, but it has taken 130 years (and a remarkable journey out of obscurity) for the boards to return to their point of origin.

Jonah Kuhio Kalanianaole, David Kawananakoa and Edward Keliiahonui came to California as students at St. Matthew’s Hall, a military academy in San Mateo. The Southern Pacific railroad had recently connected San Mateo to the coast, which enabled the princes to easily spend many weekends in Santa Cruz, where they either stayed with family friends or boarded at the Wilkins House on Pacific Avenue and Cathcart Street. Both locations were conveniently located near the San Lorenzo River, the mouth of which had been a popular location for “surf-bathing” since at least the 1860s. The beaches and surf line, of course, were significantly different than they are today, before the massive changes incurred when the Army Corps of Engineers built river jetties in the 1950s and constructed the Small Craft Harbor in the 1960s. At the time, the meeting point of the Pacific Ocean and the San Lorenzo River reliably produced rolling breakers similar to those along Waikiki in Honolulu—familiar surf turf for the three young princes.

After their mainland surfing debut was documented by the Santa Cruz Daily Surf newspaper in 1885, the boys stayed another few years in California (surely surfing many more times in Santa Cruz), finished their schooling, and returned to their island home. They took their boards with them, kicking off a trend of California redwood being shipped to Hawaii for surfboard creation. Edward died shortly after returning to Hawaii, but Jonah and David went on to travel and spread surfing to the United Kingdom and other parts of the world, both developing long, varied careers and making significant contributions to Hawaiian culture, history and politics.

Their Santa Cruz redwood O’lo surfboards, however, like so many of the toys and mementos of childhood, seemed to fade into their past. Until, that is, one day late in 2010 when Kristin Zambucka, author of five books on the Hawaiian monarchy and one of those instrumental in celebrating the royal nephews with a monument at the Santa Cruz Surfing Museum, spotted a distinctive 17-foot-long “pine” board in an exhibit of antique surf boards at The Bernice Pauahi Bishop Museum in Hawaii. She later noticed a nearly identical o’lo board, this one labeled as redwood, in a Bishop Museum storage facility, and suspected she had found the princes’ lost boards.

This was confirmed when Mac Reed, a Santa Cruz historian, surfer, and member of the Santa Cruz Surfing Club Preservation Society (SCSCPS), rediscovered the two o’los at the Bishop in 2012. A 4-inch block of first-growth redwood was obtained from Big Creek Lumber in Santa Cruz and shipped to Hawaii for examination and comparison to the boards, where they were found to be identical woods.

For more than three years after Reed’s discovery, members of the Santa Cruz Surfing Club Preservation Society worked closely with the Museum of Art & History in Santa Cruz to exhibit the boards on their home turf. Their efforts paid off when the “Princes of Surf” exhibit opened—130 years after that first history-making ride— at the MAH on July 3. On loan from the Bishop, the boards will be on display through Oct. 25. Kim Stoner, of the SCSCPS, says the years of work in creating the exhibit were well worth it: it’s all about the “mana,” or Hawaiian spiritual power, he says. “They’re returning to where they came from. They’re coming home.”

The boards were in the o’lo style, a shape reserved for Hawaiian royalty. They clocked in between 17 and 18 feet in length and 150 and 175 pounds in heft. Prince Jonah’s board has a rounded front tip and Prince David’s has a pointed tip.

See ’em to believe ’em: The Museum of Art & History will have these boards, as well as other artifacts of the princes’ historic surfing venture, on display through Oct. 25. 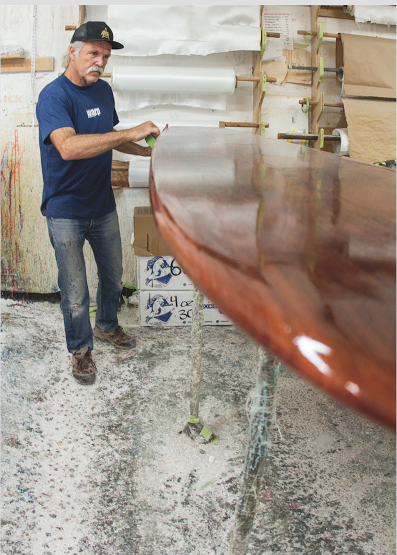 On July 19, 130 years to the day that the three princes rode local waves, a group of local surfers (including Waves founder Tyler Fox) tried their hand at surfing like their progenitors aboard replicas handcrafted by iconic Santa Cruz shaper Bob Pearson, of Arrow Surf Products. Pearson, who has shaped more than 75,000 boards in his 50-year career, made 15 redwood boards for the occasion, including 17-foot, 200-pound behemoths in the style of the princes’ “o’los.” The surf demonstration was followed by a paddle-out led by local historians Kim Stoner and Geoffrey Dunn.

What inspired Bob to make the boards? He shared the following goals:

1. “To bring the news to the world that the princes first surfed in Santa Cruz in 1885 and the boards still exist.”

2. “To let the world know how precious these boards are in that they were the first to surf in the Americas.”

3. To demonstrate “how thankful we all are to the princes for bringing the sport of kings to the world.”

4. “To show respect for the past, present and future. [It’s] all about the ohana and mana, and our surfing heritage binds us together with this sacred and spiritual energy.”

For more information about the “Princes
of Surf” exhibit, visit santacruzmah.org.

Historical photos: courtesy of the MAH