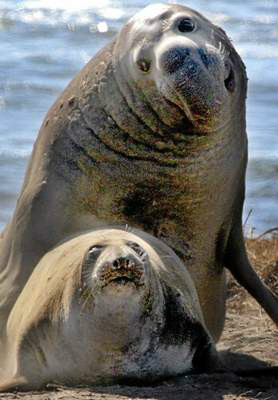 In a new study, UC Santa Cruz researchers traced methylmercury — the most toxic form of mercury — in coastal waters near the elephant seal rookery at Año Nuevo State Park, where the huge pinnipeds come to breed and molt.

During the annual molting season when elephant seals shed the entire layer of skin and hair, methylmercury levels are 17 times higher at 4.42 pM, or picomole per liter, than nearby coastal sites at .26 pM. That’s according to the researchers’ findings published this month in Proceedings of the National Academy of Sciences.

Because mercury is a toxic element, the body wants to get rid of it. One major way of doing so is through hair.

“We speculate that when they come to molt, it’s a pulse of methylmercury to the near shore,” said first author Jennifer Cossaboon, who led the research while studying at UC Santa Cruz and is now a graduate student at San Diego State.

It’s important to monitor methylmercury “hot spots” in the ocean because they could contaminate seafood and harm humans, she said. Industrial emissions have greatly increased the amount of mercury present in the ocean.

Small marine microbes convert mercury into methylmercury, a neurotoxin then absorbed by animals that eat those microbes, she said. As it moves up the food chain, it becomes more concentrated and more dangerous.

Top predators like elephant seals accumulate high concentrations of methylmercury in their bodies. The seals spend half their time foraging in the open ocean and the other half on the coast, where they don’t eat at all. So the scientists think they bring mercury from the deep sea back to shore.

Their study highlights the “mercury cycle,” and how important it is that we understand the different aspects of it, Cossaboon said.

“When we are looking for hot spots of methylmercury contamination, they’re traditionally associated with industrial pollution and urban areas like the San Francisco Bay Estuary,” she said. “But there’s a potential for these contamination hot spots to be in unrecognized locations.”

But technology wasn’t advanced enough then to measure mercury in the seawater itself. Knowing that the presence of elephant seals differentiates Año Nuevo from other shores and remembering the high mercury levels in their feces, the scientists returned to the massive mammals.

“It’s only been in the last two decades that people have been able to look at the movement of methylmercury,” Flegal said. “There’s a big concern about how it’s cycled through the environment and how it gets moved up the food chain and reaches potentially toxic levels to humans.”

Mercury doesn’t degrade, making it a complex dilemma. It gets recycled, as the study shows is the case with elephant seals.

Mercury concentrations in top predators can be 1 million to 10 million times higher than levels found in seawater, according to the study. When the elephant seals shed, defecate or die, the toxin gets diluted in the water, and consumed again by other animals.

“They’re the vector, not the source,” Flegal said. “The level of mercury in the ocean is about four times the natural level because of human activity.”

Though the study highlights pollution as a problem, the researchers aren’t sure how the mercury levels exactly affect the elephant seals and the environment.