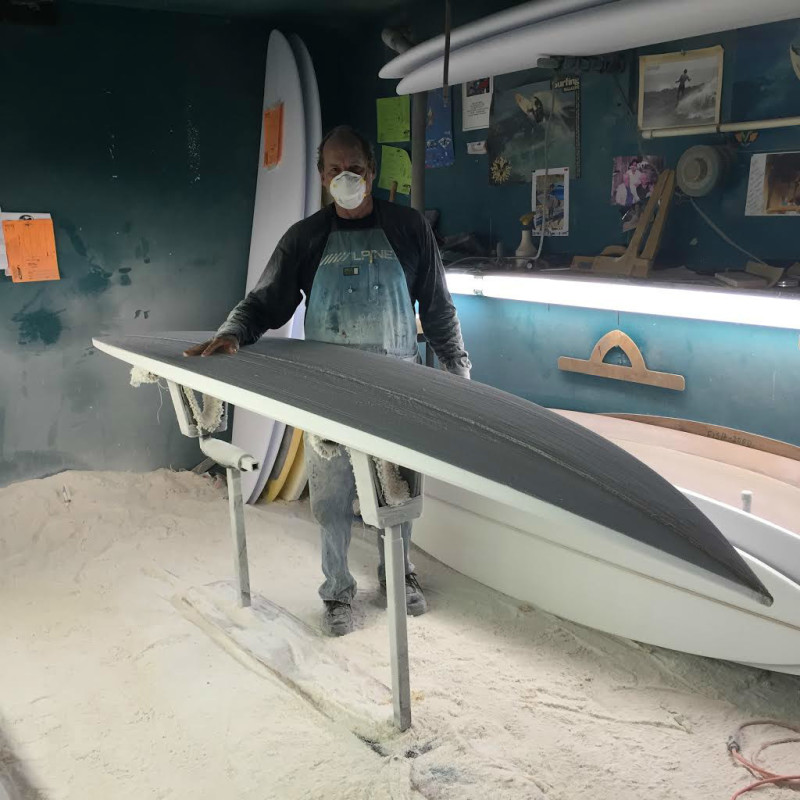 Master shaper and classic surfer Billy Hamilton, on a recent visit from Hawaii, works on a new board at Freeline Surf Shop in Santa Cruz

Every year, a traditional invitation is extended to master surfboard shaper, and Hawaiian resi-dent, Mr. Billy Hamilton by his close friend and John Mel, founder of Freeline Surf Shop, to come to Santa Cruz to surf, and shape a selection of ordered surfboards at his shaping room in Santa Cruz.

During his most recent visit in July, I found myself fortunate enough to spend some time with Hamilton—the father of big wave rider Laird Hamilton, and one of the purest longboard riders of any generation.

Hamilton has has been extended nicknames including “The Style Master” and “The Jesus of Cool,” garnering attention over the years as he danced like Mikhail Baryshnikov across his board upon the waves at Oahu’s, North Shore.

I first met Hamilton at Santa Cruz radio station KSCO, where in July this summer he was my guest on the Off the Lip Radio Show. After an in-depth interview, followed by dinner at Star Bene, that bond amongst fellow ocean lovers was certainly strengthened, and a certain trust came about.

That trust earned me an invitation, ‘sans’ camera, to a private property in a non-disclosed loca-tion in Happy Valley, to view the most beautiful surfboards I have seen thus far, handcrafted by iconic shapers such as Jim Phillips, Al Merrick, Renee Yater, and Hamilton himself.

Upon arrival, I was treated to a tour of the redwood forested grounds of this spectacular property by Hamilton. During our stroll he pointed out amongst the tall trees the first school house used in Santa Cruz County, along with a large two-story home milled and crafted from some of the red-woods trees on the property. Nearby, an odd looking structure caught my eye—what my guide described the neighboring “Gingerbread House.”

Hamilton seemed to be very comfortable amongst the redwoods, the mill, the shaping tools and the classic vintage surfboards, relaxed and telling surfing stories from his vast collection of memories to this eager listener—that included the first day that he met his adopted son Laird Hamilton. 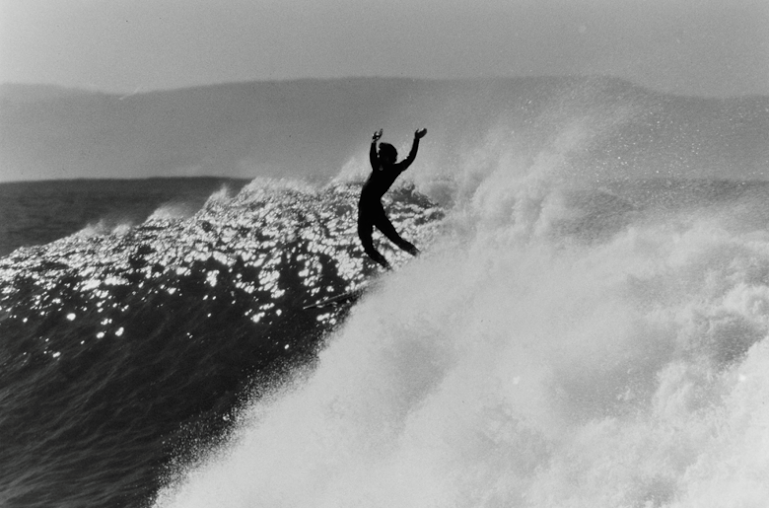 Billy Hamilton shows off his freeform riding technique, a spectacle that earned him the nickname “The Style Master.”

The last stop on our tour led us to the main room of the stellar redwood house. Upon stepping through its massively framed front door, I found myself in the middle of a music studio, where along with a selection of musical instruments and amps, was a small kitchen and living area, and walls lined with sleek and glistening wooden surfboards, including Laird Hamilton’s “Mille-nium” board, which he first surfed at Teahupoo, Tahiti in 2000.

Standing in awe of my surroundings, Hamilton then quietly picked up a guitar from it’s stand, sat down, and began to play a majestic chord selection of Spanish Flamenco, that reverberated in acoustic sound amongst the surrounding walls.
As I listened to the delicate tunes emanating from the guitar strings that Hamilton’s fingers were plucking away as, I was inspired to question my own life’s path—the experiences, the endeav-ors—life’s paths not taken.

Of the many surf articles I have written, what other talents have I missed along the way, that be-long to the countless people who I have interviewed over the year? Hamilton, his fingers gliding over the guitar’s neck, making beautiful music, evoked a certain inspiration that made me think beyond the waves.

Indeed, there is much life beyond surfing, just ask Hamilton—the “Jesus of Cool.”

To read about the first time Hamilton met a young Laird Hamilton—before becoming his father—and his first interaction with surfing pioneer Duke Kahanomoku in 1967 on the North Shore, pick up the Oct / Nov issue of Santa Cruz Waves to read Neil Pearlberg’s in-depth story on “The Style Master” Mr. Billy Hamilton.

One comment on “A Walk in the Woods with the “The Jesus of Cool,” Mr. Billy Hamilton”