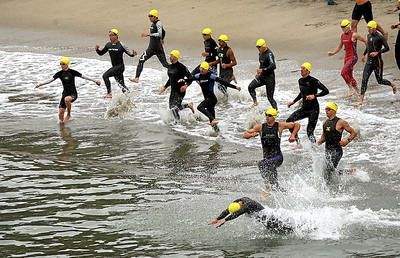 The first wave of triathletes hit the surf at Seacliff State Beach for the start of the 28th annual Sandman Triathlon on Aug. 4, 2013. (Dan Coyro — Santa Cruz Sentinel file)

The Sandman Triathlon is one of the oldest races in Santa Cruz County and turns 30 years old on Sunday. And despite the recent great white shark sightings at Seacliff State Beach in Aptos, just as the ringmaster of a circus would say: the show must go on.

The shark sightings haven’t been much of a dilemma for first-year race director Jennifer Murray, but she said the thought of it might still linger in the back of people’s minds.

“Obviously, safety is of most importance to our events,” Murray said. “Ocean swimming is not for everyone. People feel anxiety with the feel of cold water and the waves.”

That’s why Murray and the rest of the Sandman organizers decided to change up this year’s swim course. The triathlon will follow the Fog Contingency Swim Plan, a course that keeps swimmers closer to shore. The route is slightly shorter than the normal at .75-miles

“If for some reason there was a shark sighting during the race we can get them out immediately,” said Murray about changing the swim course. “Part of it is to make people comfortable.”

Ryan Nothhaft, 33, of San Jose will run in his 10th straight triathlon on Sunday and said the course alteration might affect people new to swimming in the ocean. But from a race perspective, it won’t change the dynamic of the event up front.

“There’s been course changes throughout the years when I did it,” Nothhaft said. “It adds a whole level of excitement. Change is a good thing.”

Race officials will also be honoring the Santa Cruz County Shark Action Plan, a countywide law enforcement agreement for managing shark sightings. Race officials will cancel the swim if lifeguards observe sharks in the area of the swim course within 24 hours of the race. 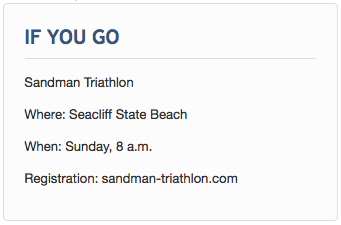 Santa Cruz State Parks Lifeguard Supervisor Eddie Rhee Pizano has also been a big help for Murray, who said he’s been scouting the beaches every day for ocean safety and conditions.

Murray contacted the USA Triathlon for some tips on what to do if a shark sighting occurs during the race but said the organization told her they’ve never encountered a situation like it before.

“They were pretty much like ‘Let us know how this goes,’” Murray said.

The good thing for Murray is she hasn’t had to deal with ocean attacks yet. Instead, she can focus on her second stint as a full-time race director and the 30-year anniversary of an event that started as a simple fundraiser for kids.

“It’s been wonderful, the State Lifeguard Association is really great to work with,” Murray said.

Murray said the Sandman Triathlon helps the junior guards by providing financial assistance to the program. The event was started by the Santa Cruz State Parks Lifeguard Association to raise funds for the local State Parks Junior Lifeguard program, including providing scholarships for kids from low-income families that otherwise could not afford the cost of the four-week program.

Santa Cruz State Lifeguard Association president Cody Gilbert has some close ties to the event as his uncle, Pat, helped create the Sandman Triathlon along with the Capitola Junior Guard Program.

“We’re just trying to get as many people as we can out to the race and continue on with his mission,” Gilbert said.

As for Nothhaft, he said Seacliff Beach has been calling his name ever since he finished his first race in 2006.

“It was a changing experience, I’ve come back ever since,” Nothhaft said. “Very few races allow you to swim around something iconic like the cement ship.”

Murray, who lives in same neighborhood as where the triathlon is put on, said it’s great to have the event in a beautiful area such as the Central Coast. She added that it’s also the only triathlon race that she’s seen that makes runners take part in an all-sand course.

“It’s such a unique, quirky race,” Murray said. “That’s really unusual in a triathlon. I’ve tried running in the sand in the past and it’s hard.”

Music has always been the language of guitarist Bireli Lagrene. Following in the footsteps of legendary gypsy jazz guitarist Django Reinhardt, Lagrene hails from Alsace and plays with incredible precision, [...]

Music has always been the language of guitarist Bireli Lagrene. Following in the footsteps of legendary gypsy jazz guitarist Django Reinhardt, Lagrene hails from Alsace and plays with incredible precision, strength and virtuosity – he is considered to be one of the world’s premiere practitioners of gypsy jazz. Lagrene’s acclaimed Gipsy Project ensemble features a trio format on this concert date, with saxophonist Franck Wolf and bassist William Branard.

Tickets available now! Experience a memory-making adventure by participating in a special event at Año Nuevo State Park. For one weekend only, visitors will have access to linger for an [...]

Tickets available now! Experience a memory-making adventure by participating in a special event at Año Nuevo State Park. For one weekend only, visitors will have access to linger for an entire morning or afternoon to view the elephant seals at the peak of the breeding season. Only 100 visitors are allowed for each half-day session to enhance your experience. This rare opportunity is one that can be enjoyed by everyone; from families to avid wildlife photographers. Only 2 half-day sessions per day: 8:30 am-noon & 1:30-5:00 pm. Tickets are available online: $75. Event made possible by California State Parks.

The WOMEN’S ADVENTURE FILM TOUR, presented by Hydro Flask and Clif Bar, is back in North America for its 2nd season!

This short film festival is a celebration of the inspiring women around us who are doing extraordinary things in the name of adventure. This year’s lineup features an all-star cast of global athletes, business women, mothers and storytellers, including cliff diver Rhiannan Iffland, climber/yoga instructor Kira Brazinski, long distance hiker Jennifer Pharr-Davis, and many more including women in snow sports, mountaineering and mountain biking.

The WOMEN’S ADVENTURE FILM TOUR will be an official part of International Women’s Day in March 2020 although the local screening will be on January 25 at the Rio Theatre in Santa Cruz. The 2019 / 2020 tour is benefitting Naretoi – A non-profit supporting girl’s education, women’s empowerment, local economic efforts and cultural exchange in Maasailand, Kenya.For more information visit naretoikenya.org