Our world produces such massive quantities of plastic waste that it often flows into our oceans, where it has amassed into colossal “garbage patches.” What will it take to fix the problem? 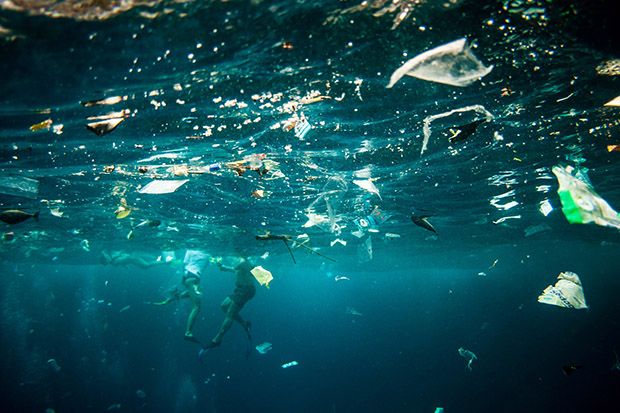 In October of last year, local surfer Danny Wright embarked with a friend on a six-month road trip from the Monterey Bay down through Mexico, across four Central American countries, and into Costa Rica.

From the seat of their ’84 Westphalia van, and at the many surf breaks they visited, Wright noted a troubling trend: near most large coastal communities, countless tons of trash—much of it plastic—had accumulated on otherwise spectacular beaches. Large quantities of that plastic, he knew, would eventually enter off-shore currents and float into the sea.

“I saw whole beaches covered,” says Wright, who volunteers for Surfrider Foundation’s Santa Cruz Chapter and acts as the coordinator for its Blue Water Task Force, an extensive water-quality testing initiative. “It got me thinking about the bigger picture and the harm that plastics are causing our oceans.”

There is no better way to grasp the gravity of plastic pollution than by taking a look at the “Great Pacific Garbage Patch,” or GPGP—a fluid area, described by some as twice the size of Texas, between California and Hawaii where millions of tons of marine debris float in the ocean currents’ convergence zone, a feature known as a gyre.

Each year, approximately eight million metric tons of plastic litter makes its way into the ocean, where it will eventually drift into one of five gyres around the planet, according to a recent study by the University of Georgia. The author compares that figure to putting five plastic grocery bags full of more plastic on every foot of coastline in the world. The North Pacific Gyre, the site of GPGP, is the planet’s largest such vortex, containing roughly 3.5 million tons of trash, 90 percent of which is plastic debris, according to Santa Cruz-based nonprofit Save Our Shores.
Many people think of this patch as something sturdy and definable—something you could walk on or crash a ship into. In reality, the majority of it is very small plastic pieces, distributed at different depths, that float like confetti in the water. This makes it more like a plastic soup than a “patch.” While this may seem like a better scenario than solid plastic waste, it means the pieces are easily consumed by sea life and makes the prospect of cleanup much more complicated.

So, in a country where the average person tosses out 185 pounds of plastic every year, according to Ecowatch.com—50 percent of which was only used once—where does fixing the problem begin?

Cleaning Up the Gyre
Removing the plastic waste from the GPGP has been deemed impossible by many researchers, who say it would cost many billions of dollars, hundreds of years, and so much ship fuel that the emissions would likely cancel out the cleanup benefits. Dianna Parker, of NOAA’s national Marine Debris Program, explains that studies have calculated that it would require 67 ships one year to simply survey the area of the GPGP at a cost of about $498 million. Plus, because so many of the plastic pieces are so tiny and scattered at various depths, recovering them would be extremely complicated and likely result in staggering by-catch (many organisms have actually attached themselves to plastic particles, further complicating matters).
Gary Griggs, a professor and the director of the Institute of Marine Sciences at UC Santa Cruz, compares a cleanup initiative to the idea of “mowing the grass covering the entire state of Texas with a hand lawn mower.”

“In my view, it is simply not practical or economical,” he writes in an email. “And I don’t think there is enough plastic in any one location to make this feasible. Fuel use would be huge, and converting all of these small pieces of plastic to fuel I don’t think is possible.”

One project that has become a beacon of hope for some—including Wright—and the source of skepticism for others, is The Ocean Cleanup organization, which was founded by a young Dutchman named Boyan Slat. Last year, the organization completed a feasibility study with more than 100 experts on engineering, oceanography, ecology, maritime law, finance and recycling. The concept, which was judged viable, uses ocean currents and winds to passively transport plastic toward a collection platform, saving massive amounts of fuel as well as eliminating the need for nets that could entangle sea life. The Ocean Cleanup posits that after deploying the system for 10 years, almost half of the plastic in the GPGP could be removed.
“I think this is one of the best chances we have at cleaning up the garbage patch,” Wright says.

Garbage to Gold?
Cleaning the patch up is all well and good, says Parker, but won’t matter much if the problem of plastic production isn’t tackled. She compares that oversight to drawing a bath in a tub with its drain plugged and, as the water brimmed and overflowed onto the floor, attempting to scoop the water up using a spoon without ever stopping the faucet.

“The garbage patch is really a symptom of a much larger problem,” says Parker. “It’s not just in the Pacific Ocean, it’s everywhere—it’s in our lifestyle. Ocean cleanups are incredibly difficult—it would be impossible to remove all of it—so the focus really needs to be on preventing plastic from entering the ocean in the first place.”

Wright’s road trip into Central America got him thinking about recycling incentives. He says the fundamental change that needs to occur is to establish systems for recycling plastic waste that generate revenue and create jobs, especially in Latin America.

“There’s no ownership over the problem, so the only way we’re going to make change on an international level is by making it profitable,” Wright says. “We need to find ways to recycle plastic waste on land—treat it like gold before it ever gets to the ocean.”

Plastics are recovered from landfills, a “complex waste stream,” at a rate of less than 10 percent, while metals, such as steel and aluminum, are recovered at a rate closer to 90 percent. However, on a cost per weight basis, plastic is significantly more valuable than the metal, according to MBA Polymers, a company in Richmond, Calif. specializing in plastics recycling.

The MBA Polymers system reclaims plastics from landfills—what its founder calls “above-ground mining”—sorts them, melts them down and converts them into plastic pellets, then markets it for new goods. The process uses 20 percent of the energy traditional plastic manufacturing requires, reduces the need for petroleum-based feedstocks (yes, plastics are made using petroleum), and reduces carbon emissions. And though the company’s plants are based overseas and operate on a small scale relative to “virgin plastic” manufacturing and plastic waste output, the system is a viable template for closing the supply loop and keeping this meddlesome material out of the ocean.

Captain Jim “Homer” Holm, the founder and executive director of Santa Cruz’s The Clean Oceans Project, says that propelling an industry around the conversion of plastic-to-fuel will get people to start thinking about plastic leftovers as a profitable material and not just as something to be thrown away and forgotten about. He believes, like Wright, that people’s motivation to make a dollar has a better shot at changing the way society thinks about the plastic waste than altruistic environmental concerns.

“People don’t need to support whales or turtles or surf or sail to rid the shoreline of plastic debris,” says Holm, whose organization hopes to eventually work on converting ocean plastic pollution into fuel. “If they make a profit by collecting plastic waste then the streets and shores will be cleaned daily around the world and the oceans will get a break.”

Changing Our Ways
There’s no way out of this problem without changing how we consume and discard plastic materials in the first place. It is the daily consumer’s plastic waste stream that seems so minuscule on an individual basis, but in reality adds up greatly. For example, it is estimated that Americans use more than 182 billion plastic straws per year—enough to fill up Yankee Stadium nine times over.

Alexandria Hays, a local singer and energy healer, challenges herself to produce zero plastic waste. Adhering to the steps on myplasticfreelife.com, Hays carries a mason jar for drinking, shops at farmers’ markets with reusable bags, buys in bulk, declines plastic straws, and composts to eliminate the need for plastic garbage bags.

“Global change happens one person at a time,” Hays says. “By spreading awareness about what we do as individuals we can minimize the amount of waste we all produce on a daily basis, and avoid contributing to more plastics going into our oceans.”

Still, Rachel Kippen, program manager for Save Our Shores, explains that no single tactic will solve or truly stem the plastic contamination problem.
“We need to encourage outside-of-the-box thinking and a collaborative and collective approach,” she says. “Creating innovative technology designed to deal with the plastic waste that we continuously produce as a society is an important step, [but, at the same time] we need to reduce and ultimately eliminate our reliance on single-use plastics. It’s important that we approach the issue from multiple platforms.”

To truly change the way plastic waste is contaminating the planet, everyone—individuals, nonprofits, government, and researchers—must tackle the problem from their own vantage point, she explains. Making that change will have to include educational campaigns, policy changes and legislation, as well as new research, innovative thinkers, and funding for diversion and cleanups.

Home in Santa Cruz, Wright is still haunted by foreign beach breaks tainted by plastic trash, but holds out hope that people will realize what is happening to the ocean and strive to be part of the solution.

“Anyone who has a strong connection to the water, like surfers, [knows that] it’s that connection with nature, sea life, that makes us love it,” he says. “With the garbage patch out there, it’s obvious we can’t keep going down this path.”