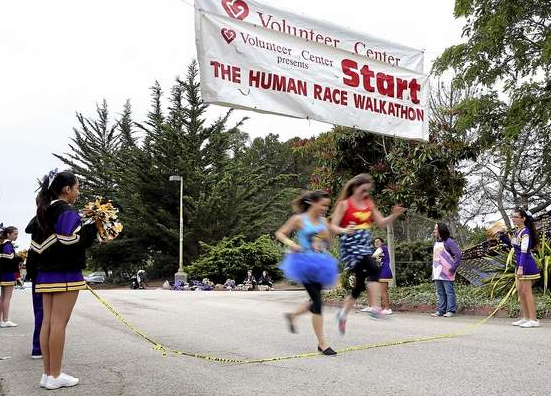 SANTA CRUZ >> Amid gray skies and cool temperatures, thousands of people took to the streets clad in capes and tights for the 35th annual Santa Cruz Human Race on Saturday morning.

“This is the one day where we can invite all our community organizations, whether they’re nonprofits, schools or faith-based organizations, and work together in solidarity,” said Kelly Mercer, coordinator for the event.

As the race kicked off, participants ran, biked, skated and walked over the starting line. Many whooped with excitement while others powered down the course with resolute expressions. The race began near Natural Bridges State Beach, taking runners to Lighthouse Field State Beach and back to the Natural Bridges.

“Anyone who is here today that got up this early is a superhero to us,” she said. “They’re standing up and saying they’re going to walk for their community.” 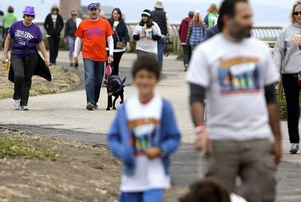 Racers make their way back to Delaware Ave after walking to Lighthouse Point in Santa Cruz on Saturday morning during the 35th annual Human Race. (Kevin Johnson — Santa Cruz Sentinel)


Karen Delaney, executive director of the Santa Cruz County Volunteer Center, which helped spearhead the race, remembers some of the early days of the race.

“Back in the day, we would get a few hundred people running the race. Now we’re pushing 2,000 this year,” she said.

Delaney said one of her favorite things about the event is the happiness she sees on people’s faces.

Leading up to the event, the Volunteer Center held several cape making events to promote the race. Many participants came clad in capes made from the workshops. Some capes were simply the fabric held together with a safety pin. Other capes were more elaborate. Some decorated the backs with glitter and words representing their organization. Some capes were handmade, complete with drawstrings at the neck and emblems sewn into the fabric.

Sequoia, who said she was cold, was smiling and giggling as she walked with her grandmother.

The duo, dressed in matching magenta capes, dubbed themselves “Super Sequoia” and “Gorriffic Grandma.” Both were walking on behalf of Bread for the Journey, a nonprofit that gives seed money to other nonprofits starting off.

“I think it’s a wonderful opportunity for nonprofits to get out there, be seen. Get some sponsors and have fun,” Hilton said.

I take photos, manage and do admin for Santa Cruz Waves. Event photography is my specialty. I am versatile and will also take nature, landscape, portraits, food, sports, and advertisement shots. I love what I do!

View all posts by Yvonne Falk