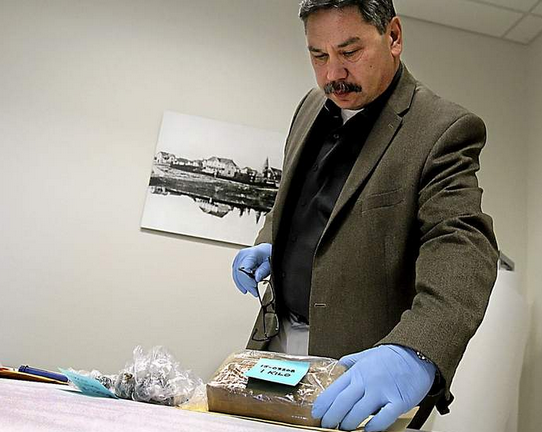 Santa Cruz County Anti-Crime Team Task Froce Cmdr. Mario Sulay holds a kilo brick of heroin captured during a raid this year. Sulay says that this is the first time in all his years in Santa Cruz County law enforcement that a brick of this size has been found during an arrest. (Shmuel Thaler — Santa Cruz Sentinel)

WATSONVILLE >> Heroin traffickers have sharpened their focus on Santa Cruz County in recent months, capitalizing on more people drawn to the drug while coming off prescription painkillers such as oxycodone and Oxycontin, law enforcement authorities said.

Leaders from the Santa Cruz County Anti-Crime Team, which works with all county law enforcement agencies, the Drug Enforcement Agency and others, said it seized about 4.2 kilos of heroin this year — more heroin than the past five years combined. Anti-Crime Team Cmdr. Mario Sulay said the team also arrested two high-ranking heroin dealers in Santa Cruz in April, and are watching to determine whether those arrests helped cut the flow of foreign heroin to the county.

“We know cartels are making inroads,” Sulay said this week.

Heroin seized by Santa Cruz County authorities is believed to have come from Mexico because opium poppies needed to produce the drug generally are not grown here. Also, Mexican drug cartels prefer to traffick heroin because unlike cocaine, they don’t need to get it from South America or elsewhere.

Demand also appears to have risen, as the path from prescription drug abuse to heroin has become more common in Santa Cruz County in the past year, leaders from the Anti-Crime Team said.

“People get prescribed oxys, get addicted to those then buy those on the street. When those are harder to get, they get on heroin,” said Sgt. Peter Hansen of the Anti-Crime Team.

A day’s heroin fix, with, say three doses, can cost $50 to $75, Hansen said. To get that money, addicts in Santa Cruz County have broken into cars, committed violent robberies and burglarized homes and businesses to find items to fence, he said.

To try to reduce the impact of drug abuse on everyone in Santa Cruz County, the Anti-Crime Team tries to suppress gangs and drug dealers through its two task forces: the County Gang Task Force and County Narcotics Task Force. They both include officers, money or office space from all law enforcement agencies in the county, as well as the assistance from the DEA, Homeland Security Investigations, County Probation and the Santa Cruz County District Attorney’s Office.

Sulay declined to say how many officers are on each task force because of their undercover status. In terms of enforcement, he said, “Gang suppression is more overt. Drugs are more covert.”

For instance, Gang Task Force members might check up on a person on probation to make sure he doesn’t have any guns or drugs. They serve search warrants and raid houses, and also might make a presentation to middle school students about the dangers of gangs.

For the Narcotics Task Force, the focus is on developing and investigating information through surveillance on the street, wiretapping, the use of informants and two-way coordination with the DEA, authorities said.

This year, the Narcotics Task Force has arrested about 15 suspects related to drug dealing and guns and seized more than $272,000 in cash related to drug sales. Seized cash is used as evidence in court trials. Later, authorities submit it for judicial review where they have to prove its link to a drug sale, Sulay said. If a judge agrees, the money is forfeited and can go to more law enforcement efforts against drugs, authorities said.

Seized drugs similarly are presented as evidence in trials. A representative sample of the drugs typically is taken from it for evidence purposes, then the rest is incinerated in “an EPA-approved way,” Goldberg said.

One of the alleged drug dealers busted by the Narcotics Task Force on April 17 was 41-year-old Hilario “Cholo” Garcia. He was apprehended on the 300 block of Ocean Street with 3 pounds of methamphetamine and nearly 3 kilos, or 6 pounds, of heroin in his vehicle, authorities said.

Another alleged trafficker, 36-year-old Martolo “Gordo” Navarro, also was arrested April 30 in Santa Cruz and linked to a half-pound of heroin, evidence of heroin trafficking and more than $193,000 in cash. It was the most cash seized in a single bust in the 30-year history of Anti-Crime Team, said Sulay.

“It’s definitely something to be concerned about,” Sulay said of the busts. “When the market is inundated with that much drugs, to me that’s a red flag that needs to be paid attention to.”

View all posts by LS