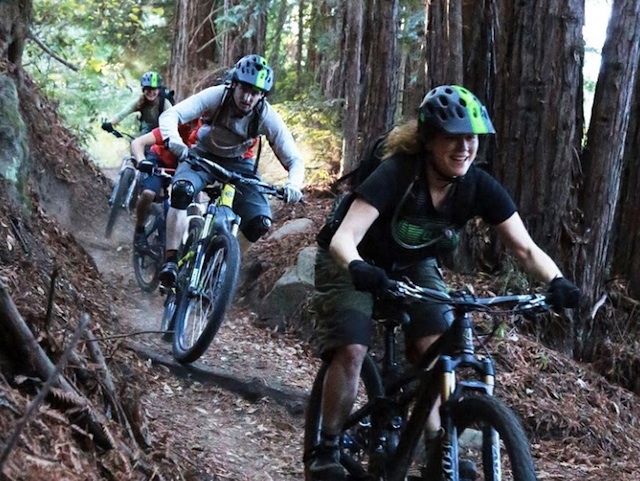 This year’s Santa Cruz Mountain Bike Festival is just a 10-minute ride from the Emma McCrary Trail and other world-class singletrack. The Festival runs April 11-12, 9-6 on Saturday and 9-4 on Sunday, at San Lorenzo Park. Admission is free. Photo courtesy MBoSC.

The Santa Cruz Mountain Bike Festival is back! Only this year it’s in downtown Santa Cruz and refocused on the bread-and-butter of local mountain biking: riding world-class singletrack.

This weekend, April 11-12, the SCMBF will take over San Lorenzo Park in the heart of downtown Santa Cruz. The location puts the festival a 10-minute ride via the bike path on the levee from the Emma McCrary Trail and the vast network of Wilder Ranch and UCSC singletrack, sanctioned and not, to which it connects—a far cry from the fire road of Nisene Marks and smattering of singletrack south of the steel bridge that festivalgoers made do with in the last several years at Aptos. And while festival director Justin Beck notes that some people will be upset over the loss of the famous Aptos Post Office jumps, it was always the plan for Barry Swenson Builders to eventually close the jumps and begin construction on a long-anticipated mixed-use development.

“We really looked at who are the people that enjoyed our festival and what are the biggest demographics, and really it’s families with kids,” says Beck. “A lot of times it’s the mountain biking parents who are getting their kids into it, and it’s not necessarily pump tracks and dirt jumps. It’s a leisurely ride on the levee and then maybe some singletrack.”

Learn about the kids’ activities, plethora of skills clinics, high-adrenaline airbag jumps and other goodies at this year’s Santa Cruz Mountain Bike Festival on Hilltromper.

View all posts by Hilltromper