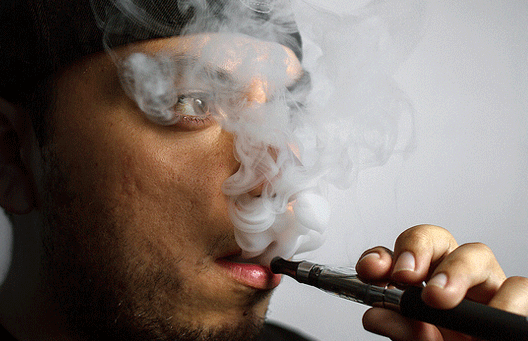 Last week the California Department of Public Health released a report aimed squarely at e-cigarettes, also known as “vape pens”. In it, the State claims that vaporizing pens, while not as harmful as conventional cigarettes, still pose a significant threat to public health, and that “second hand vapor” in public spaces is cause for alarm. They point to the fact that e-cigarettes contain a variety of harmful chemicals, including Benzene, Formaldehyde, and Acetaldehyde, as well as nicotine, all of which have been linked with cancer. Yet if the report wasn’t enough, the Director of the Department of Public Health, Ron Chapman, is embarking on an extended public relations campaign to push for greater e-cigarette regulation.

At the heart of this campaign is the worry that e-cigarettes are a gateway into smoking for a younger audience. While smoking rates for conventional cigarettes in California are at historic lows, e-cigarette use has skyrocketed, especially among young adults. And it’s not hard to see why – given the wide variety of fruity flavors, such as watermelon, strawberry and even “super fly lemon”, the vape pens have obvious appeal to younger generations. But do they lead to greater conventional smoking?

That’s the exact opposite of what many vaping ads claim they do, as they are often marketed as a way to reduce conventional smoking. Industry representative, Gregory Conley, President of the American Vaping Association says, “there is ample evidence that vaping helps smokers quit and is far less hazardous than smoking.” The AVA’s website lists countless cases and testimonials detailing just that, and from the website alone it would seem that vapor pens’ sole use is for helping smokers kick their habit. But if prior debates over smoking are any indication, this could be a slight of hand in political rhetoric, as the top three online vapor pen retailers fail to mention vaping as substitute for conventional smoking anywhere in their marketing materials.

All of this has prompted new legislation. Introduced last week by State Senator Mark Leno (D-San Francisco), Senate Bill 140 would regulate vapor devices the same as other tobacco products, meaning that they would be banned indoors in all restaurants by default, as well as close proximity to schools, hospitals, and other public spaces. The move comes as other States have taken similar actions against public vaping, and after the Food and Drug Administration officially defined e-cigarettes as “tobacco products” on the national level.

And this is the crux of the issue, while e-cigarettes are undeniably “tobacco products”, in the sense that they are functionally similar to tobacco and contain many of the same chemicals, they are also just vapor. As someone stated in an online forum on the topic “I’m torn on being allowed to vape inside, I think any business owner should have the right to not allow vaping within their establishment, but the vapor from e-cigs is much less noxious than smoke from cigarettes.” And while the evidence against vapor being healthy is fairly straight forward given its chemical components, these same public health officials are telling us outright that vaping isn’t as bad as conventional smoking. So should we regulate it in the same way?

You decide. Cast your vote below on whether or not vaping in California should be regulated in the same way smoking is. Tell us why you voted that way by leaving a pro or con statement, or suggest a compromise for how we can regulate vapor differently.

2 comments on “Is Vapor as Bad as Smoke?”