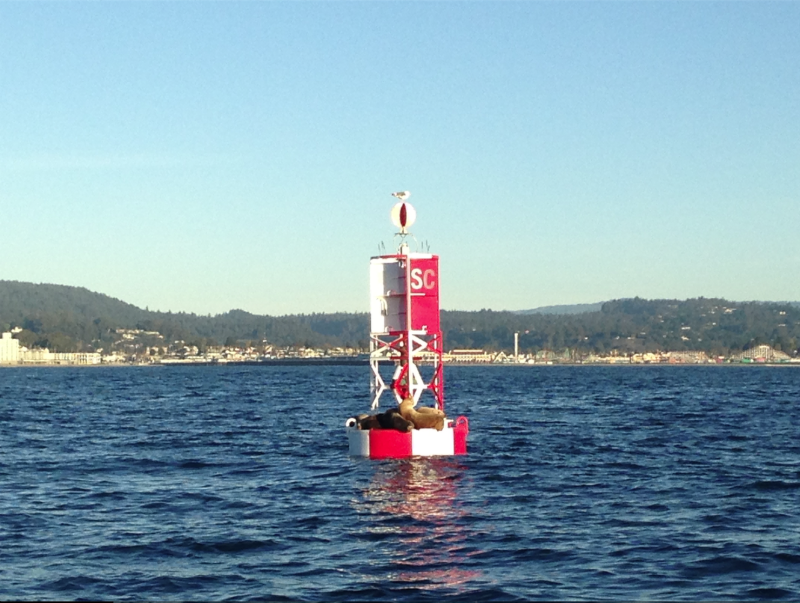 After early season proposals to remove the iconic “Mile Buoy” from Santa Cruz, it appears it has been replaced with a new model and is here to stay. Many local boaters apposed the idea to remove the Lighted Whistle Buoy and have it replaced by only a “digital navigation marker” so the newly painted and secured buoy is a good sign for local mariners.

Not only is the Lighted Whistle Buoy a favorable aid to navigation but also an iconic fixture anchored outside the Harbor and the Municipal wharf. The Buoy is one of 16 Buoys that were proposed to be removed along with Moss Landing, Ano Nuevo and Pillar point. They are a series of Lighted Whistle Buoys that mark port entrances, significant points and islands. They are set in 10 Fathoms (60 feet of water) and serve as an aid to navigation. The Santa Cruz Buoy may have been seen as redundant due to Point Santa Cruz Lighthouse, and the Walton Lighthouse on the Harbor’s west jetty, but many boaters disagree.

The Buoy is set in 10 fathoms of water due South of the Harbor a 180 heading from port it is a safe route when leaving the harbor that can have breakers and thick kelp during the summer months bordering the entrance. The Buoy was also a great marker to dial in radar; I would always tune and align my radar using the Buoy as a safe reference. The Buoy can be seen from shore from Soquel Point to point Santa Cruz, and is always fun to cruise by to see resting Sea lions and birds. The Buoy is also located in a favorable fishing zone in areas where shale reefs meet sand, squid, halibut and rockfish are known to lurk in the surrounding waters. Many fishing stories have been formed around the “Mile Buoy” with many more are to come.

Rockfish and Lingcod season closes the end of the year. Crab fishing has slowed down but remains good for those willing to put in the effort between storms. Perch fishing along the beaches remains the top pick, with anticipation high for returning steelhead to the rivers. Remember to buy your new Fishing License for nest year and have Happy Holidays.

I take photos, manage and do admin for Santa Cruz Waves. Event photography is my specialty. I am versatile and will also take nature, landscape, portraits, food, sports, and advertisement shots. I love what I do!

View all posts by Yvonne Falk