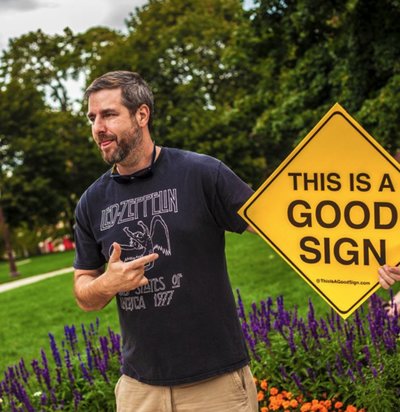 Good Sign founder, Eric Dennis has been touring the country, carrying his “Good Sign” with him wherever he goes. From universities to bus stops and highways, he is sure to display his sign with the hope that “One person has a good thought and does something amazing.”

Eric, along with his Good Sign partner and Michigan native/resident, Kevin Lamb have built a team they call “Team Good Sign,” who are out in the world displaying Good Signs on iconic landmarks including Stonehenge, the harbor at Rhodes Greece, Times Square NYC, and even Bob Marley’s gravesite in Jamaica.

The common message of hope is simple enough, clever enough, and needed enough to make a dramatic difference on the health and happiness of the masses. In addition to healing hurting hearts and minds, it is the effort of This is a Good Sign to lead by example and give individuals faith that their goodness and vulnerability will not be taken advantage of, but paid forward.

On Thursday November 20th, 2014, Eric and Kevin are taking the “Good Sign Movement” to Kickstarter in hopes that Good People will join Team Good Sign and help Good Sign the Planet.

Check out the Kickstarter video, make a donation to help the Good Sign movement grow, and make the world a better, more positive place.

Kevin Alan Lamb was born and raised in West Bloomfield, Michigan. He played baseball at High Point University, NC, and earned a Master’s in Communications and Leadership from Gonzaga University, WA. He Currently resides in Ferndale, MI in command of the Detroit office for Good Sign.

Kevin was a sportswriter for Sportz Detroit Magazine and hosted a sports-talk radio show on DFN called “Shaggy Lamb & the Fan.” He has published two books, “The Haven Sanitarium,” a non-fictional work about the mental institution in Rochester Hills, MI, which treated several celebrities including Frank Sinatra and Rose Kennedy, and “The Dying Romantic,” a collection of poetry.

Kevin loves music, fantasy sports and healing the hearts & minds of the masses with his words.

Check out the kickstarter here: https://www.kickstarter.com/projects/goodsign/this-is-a-good-sign-international-happiness-device