Postcard of the Vue de L’eau streetcar station circa 1920. Image from the collection of Mike Patnaude and part of his series of paired retrospective and modern day images in Santa Cruz County.

In the late 1800s you could take a street car to West Cliff Drive and then gamble, dance and stay in a hotel all right there! The top photo is a postcard circa 1920 of the Vue de L’eau street car station located at the intersection of todays Woodrow Avenue and West Cliff Drive. The station was built in 1891 by the Santa Cruz, Garfield Park and Capitola Electric Railway as the end of their streetcar line.

The station was built in the Victorian style and had an octagonal observatory on the second floor. The use of French for “View of the Water” was likely to give the station an exciting exotic feel.

The location of the Vue de L’eau streetcar station in 2013. Image by Mike Patnaude and part of his series of paired retrospective and modern day images in Santa Cruz County.

In 1894 the same company also built a casino with a ballroom and restaurant at Woodrow and Pelton avenues. The idea was to promote the streetcar line and further develop the area for wealthy people to vacation here. Already, West Cliff Drive near the wharves, (then just Cliff Drive) was known as Millionaire’s Row.

Yet another attraction located near the Vue de L’eau was a museum called the Free Cliff Museum.

The plan to turn the Westside into a vacation resort area was never successful. The casino closed after about ten years, and the streetcar line became less popular. It folded in the mid-1920s as cars and buses flourished. The Vue de L’eau station burned down in 1925. 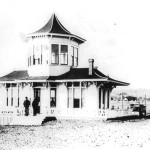 The Vue de L’eau streetcar station and observatory, circa 1894. It’s hard to see but a street car is arriving at the station. Photo courtesy of the Santa Cruz City-County Library System. 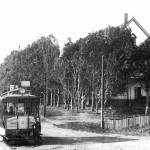 A Santa Cruz Electric Railway streetcar approaching the Vue de L’eau station, circa 1894. The casino can be seen on the right. Photo courtesy of the Santa Cruz City-County Library System. 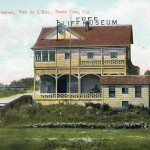 The Free Cliff Museum circa 1909. Photo courtesy of Frank Perry.

Sustained development of the Westside area of Santa Cruz did not really happen until after World War II. Woodrow Avenue is so wide today because the streetcar tracks used to occupy what is now the large median strip. 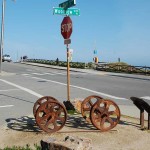 These street car wheels were found by the City Public Works Department in 2005. They were unearthed during construction on a Laurel Street water main.