SANTA CRUZ — Concerns about drug use and trash on the rocks near Cowell Beach this month have prompted renewed patrols from police and city parks workers.

A few days after surf school owner Dylan Greiner posted a YouTube video of discarded syringes and other trash he and a few friends cleaned up Nov. 8, city leaders and residents discussed the problem at an informal meeting at a Fair Avenue recording studio.

Leaders encouraged people who spot drug use to call police so they can track problem locations, even if police can’t respond immediately. 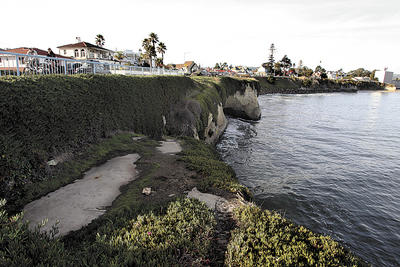 “Keep in communication. Realize that we’re a small community and we need to work together,” Greiner said.

Santa Cruz police spokesman Zach Friend said Monday that camps of drug users have migrated in response to police activity in recent years. He said groups of transients who congregated near Main Beach about two years ago gravitated toward the San Lorenzo River levee after police stepped up beach patrol, for instance.

When the overgrown levee was cleaned up this year, new camps popped up on the railroad tracks near Depot Park and below Bay Avenue. Police are investigating the homicide of a transient that occurred behind Depot Park on Friday night.

Friend said police have arrested or ticketed some of the same people in different locations for open containers of alcohol, public urination and drug possession.