In June 2011, Pacific Gas & Electric (PG&E) announced that they would be applying to conduct a high-energy offshore seismic survey off the coast of San Luis Obispo. PG&E hopes that this survey might help to prevent a nuclear disaster at their Diablo nuclear plant similar to that which occurred in Fukushima, Japan last year. Similar seismic testing has been done in several other parts of the world and has been associated with the disruption of marine wildlife by some experts.

The Surfrider Foundation recently began a campaign opposing this testing. Stefanie Sekich-Quinn, California Policy Manager for Surfrider says that the organization thought long and hard about the proposed testing before taking a stance. “We wanted to be very mindful about how we approached this, but unfortunately the more we started digging, the more we found that really gave us huge concerns.

The proposed seismic testing originally entailed towing a quarter-mile-wide array of underwater “air cannons” that emit 250 decibel blasts into the ocean every 15 seconds for 12 days. For reference, a leaf-blower emits a sound of around 115 decibels. For those who attended Fleet Week in San Francisco this past weekend, a jet plane 100 feet away emits a sound equivalent to 135 decibels. A 12-guage shotgun blast has an intensity of 165 decibels.

The proposal has since been amended to include “ramp-up periods”, which would space out the testing over the course of 2-3 years. It was amended in hopes of scaring sea life out of the area before the louder seismic blasts occur.

Sekich-Quinn outlined three primary reasons for opposing PG&E’s proposal: clear and imminent harms to marine wildlife, likely harms to human recreationalists in the area, and the possibility that this testing will not be very informative in the end. “PG&E’s Environmental Impact Report (EIR) clearly states that there will be significant and unavoidable impacts to marine life,” says Sekich-Quinn. Since this testing is unprecedented in the area and since marine wildlife can be extremely difficult to consistently locate and track, the amount of harm that will be done to the ecosystem is hard to effectively estimate.

That said, similar testing has been done in other places. Between January and April of this year, an offshore oil survey was conducted using air cannons. On April 4th, 615 dolphins washed ashore. April 4th’s count is only a fraction of the final reported casualties. Thirty of the dolphins had fractured middle-ears. Much of the wildlife had cell damage resulting from bubbles associated with decompression sickness (known to divers as the bends). Sekich-Quinn notes that “The Navy has documented that when they do sonar testing that there has been weird changes in behavior in animals and that some would breach.” When divers ascend at the end of a dive, they have to ascend slowly so that they don’t get the bends. It is possible that the sounds from the testing caused some of these dolphins to ascend too quickly and faint or die as a result. However, the Peruvian government has denied that this dolphin die-off was a result of seismic surveys. 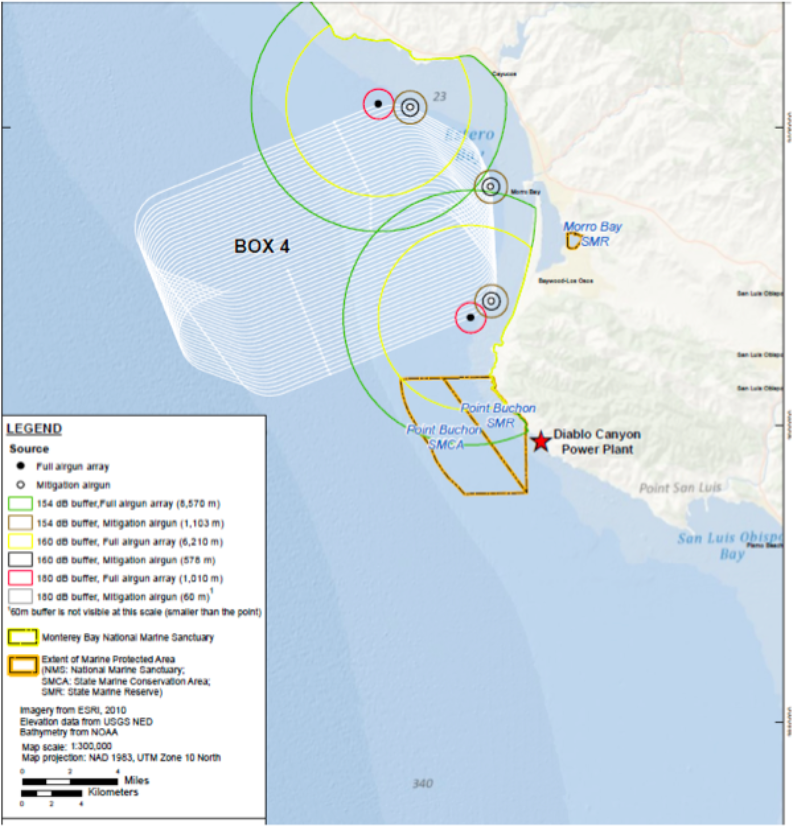 The second concern is of an even more immediate concern to humans. “Some beaches in the area would receive very high decibel levels (about 160) that would impact ocean users. The Navy has done testing on high decibel levels in the water and what that would look like to humans and they verified that the safe threshold and conservative estimate of what a human can take is about 145, so it’s well over what the Navy has identified as a safe level,” warns Sekich-Quinn. She also points out that PG&E glossed over the impact to recreationalists in their EIR. “If people are in the water recreating, they could come out feeling dizzy or have some damage to sensitive organs.” 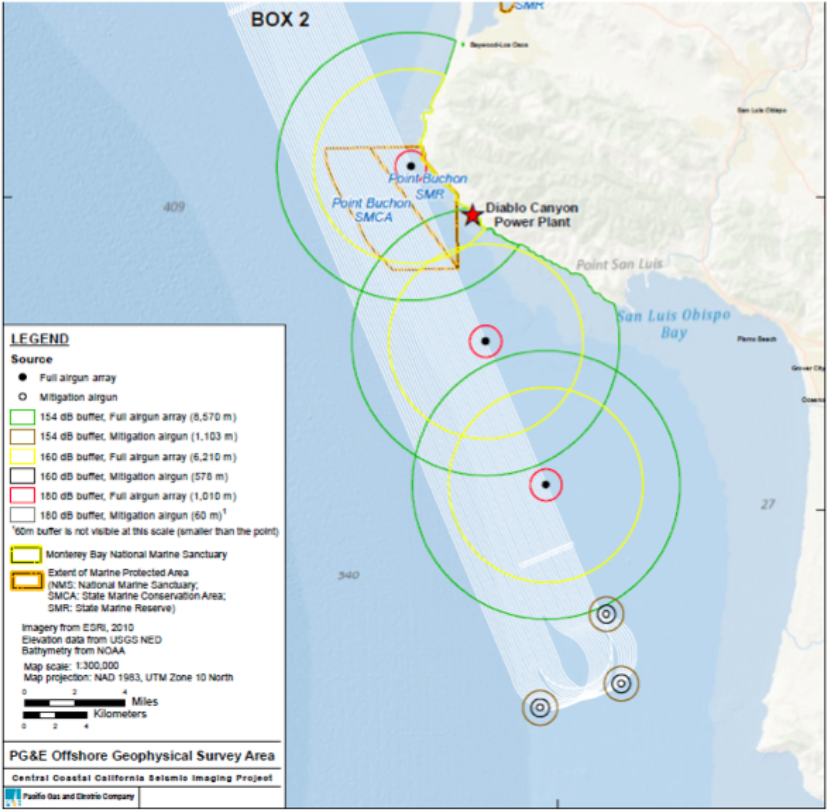 The final concern adding to Surfrider’s opposition is that the survey will not give PG&E enough information to justify such dangerous testing. In a letter to the California Coastal Commission, Surfrider claims that “new seismic surveys will not improve seismic safety estimates.” Sekich-Quinn elaborates, “Experts have told us that they’ll only receive marginal improvement of the information they already have, and the biggest thing they want to figure out you can’t actually do with this kind of testing.” Any new information gained from this survey is unnecessary for worst-case scenario modelling.

What can I do?

A concerned citizen has several avenues of opposition should he or she choose to act. The first is to send a letter to the Coastal Commission asking them to deny the project. Additionally, Surfrider’s Monterey chapter is organizing carpools to a meeting in November. Finally, Sekich-Quinn encourages everyone to write a letter to the editor of the Sentinel or any other local newspaper in order to spread the word. Every contribution helps!

View all posts by admin