Relive one woman’s solo surf trip from Costa Rica to California. This is Part 17 of a series featured in Santa Cruz Waves during the summer of 2016. 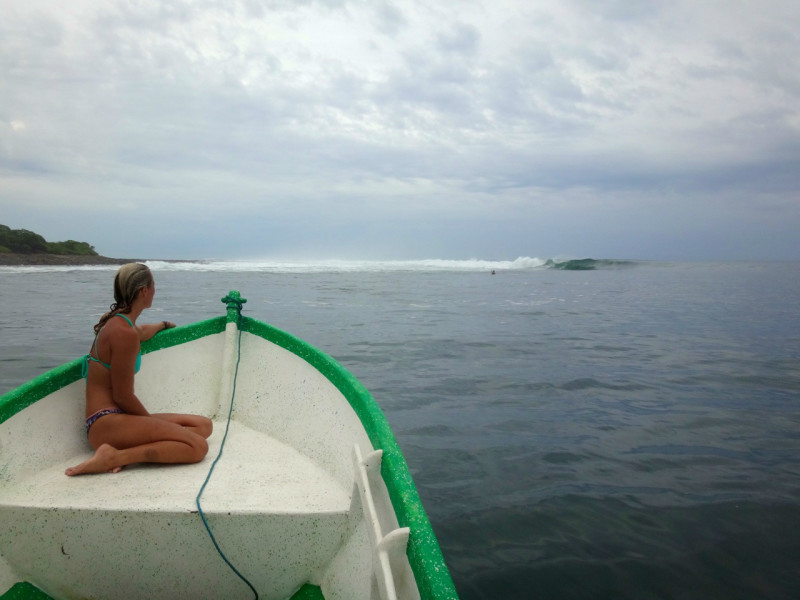 Rachel, picture perfect at the point.

While boarding a bus bound for a notorious beach break in Nicaragua, I got swindled by a man who told me he was the bus driver. He was not. Luckily, I only gave him $10. Two friends I met traveling told me they reserve a portion of their budget for getting screwed over. I thought they were on to something, and chalked up the loss of my money to paying dues.

The actual bus driver dropped me off on the side of the road, informing me that I had about 10 miles to go to the beach. No buses went down that road; I would have to hitch a ride.

I dragged my boards over to a patch of shade on the side of the road as a group of Nicaraguans watched in amusement. They were all waiting to hitch a ride as well.

Attempting to be funny, I pointed to my board bag and said in Spanish that I wasn’t going to be very popular with the drivers. It worked, and they laughed. One man jokingly asked me if I could give hime one of my boards to surf. I said, “Las tablas son mis novios. Quieres montar mi novio?” which means, “The boards are my boyfriends. You want to ride my boyfriend?” Everyone thought that was hilarious.

A truck pulled up and all 10 of us piled into the back. We put the boards on top of the cab, no time for a tie down. As the truck took off, the board bag caught air and all of us leaned against it to keep it from flying away. “Estamos surfeando la calle!” I yelled, “We are surfing the street!” Everyone laughed and hooted. I thought we were going to lose the boards, or at least my hat, several times. 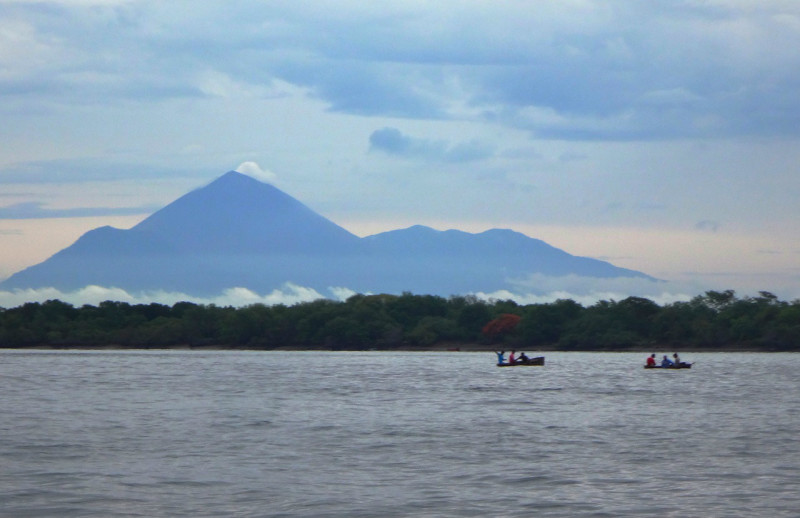 The area was much less developed than other places I had visited in Nicaragua, with lots of open space and trees.

I found a place to stay just a short walk from the break. After I set down my bags, I took a walk around the property, collecting ripe mangos and avocados that had fallen from the trees.

The area was much less developed than other places I had visited in Nicaragua, with lots of open space and trees. It seemed cleaner somehow, the landscape unmarred by the erratic footprints of man, uncrowded by buzzing hives of humanity.

I walked down to a beautiful stretch of beach with just a few inconspicuous thatch roof houses considerately tucked into the trees. A wide estuary spanned the southern end, bordered by a large, uninhabited island, dense with rocks and trees. 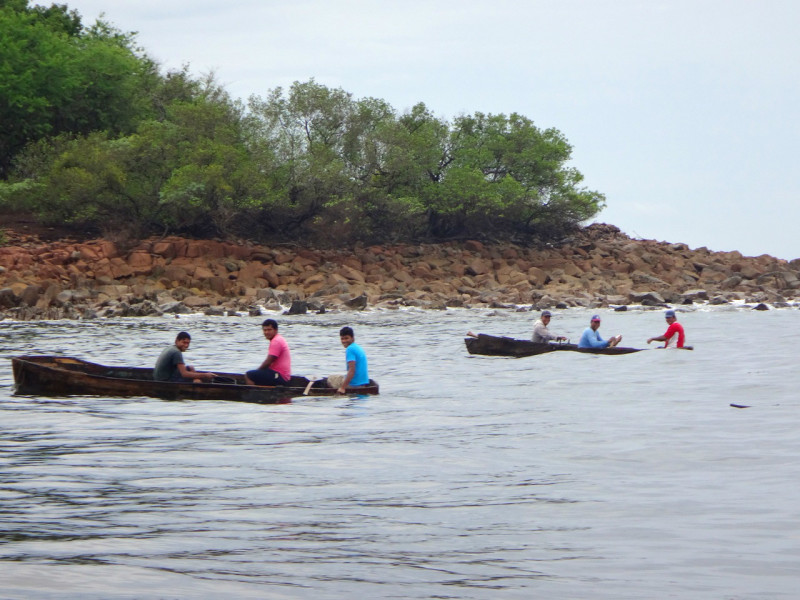 The waves broke close to the beach, dredging black sand up from the shallow water and incorporating it into powerful, spitting barrels. The waves shifted maniacally, a gentle looking shoulder transforming rapidly into a death pit closeout. The only predictable thing about the waves was that they all finished with a spectacular explosion in two feet of water, shooting fireworks of spray high in the air. I decided the waves looked evil and I was not in a hurry to surf them.

Instead, I spent most of my time boating out to a left point with another girl named Rachel. Despite jelly fish stings and cuts from the rocks, it seemed safer than the beach break. The waves were overhead, fun, and well worth it. At the end of each day, I came back from the point as other surfers returned from the beach break, some bounding up the trail in excitement to tell everyone about their barrels, others shuffling dejectedly with a piece of broken board in each hand. 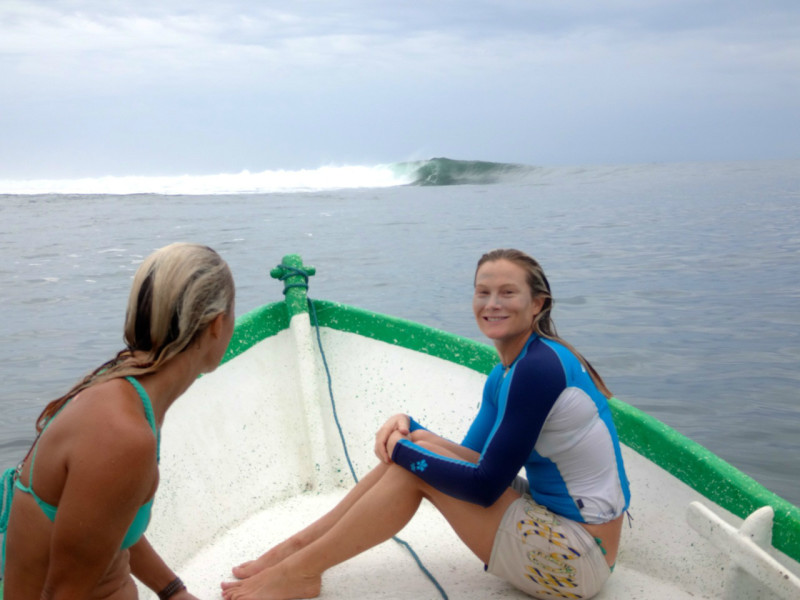 I spent most of my time boating out to a left point.

On the way back from the point one day, the boat dropped me off at the beach break as paddling in was a shorter trip than going all the way through the estuary to the boat dock. I decided to try and catch a wave or two. I quickly got a nice right, with a steep drop and a couple of turns before I kicked out easily. Not too shabby. Next I got a left on which I expected more of the same. After I dropped in, however, the wave doubled in size, which wouldn’t have been a bad thing, except for the fact that it hit the inside sandbar and morphed from a tapered shoulder into a massive closeout. I would have kicked out, if I could have, only it was too late. The wall was already jacking up several feet above my head and throwing; it was impossible to exit out the back. Worse, it was sucking out over the sandbar, preparing to break in a foot of water. There was no escape.

All I could do was straighten out, shoot my board in the air, and hope for the best. I got beaten against the bottom; my suit, hair, and ears filled with sand. Thankfully, both my board and I survived.

I didn’t get an epic barrel or a board breaking beating. But I did get a humbling experience, eradicating any lingering wish to try and be a super star. I surfed the point for the rest of my stay.

The waves were overhead, fun, and well worth it.

Aloe Driscoll graduated from Santa Clara University with a B.S. in Biology. During April – September 2015 she traveled alone from Costa Rica to California by bus, surfing and writing about her experiences. Read more from the author at savilasurf.com and follow her @aloedriscoll on instagram.

View all posts by Aloe Driscoll