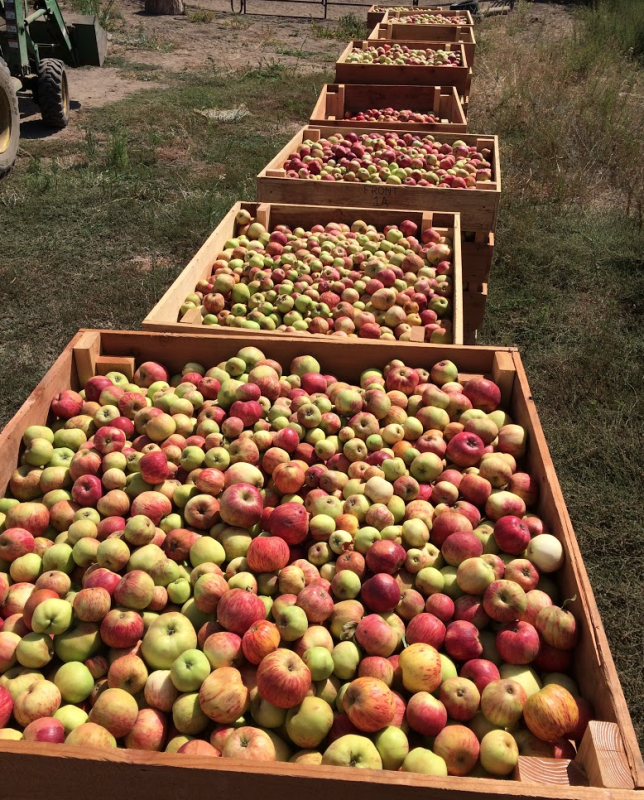 Take that Apple a day in liquid form: According to scientists at Brewing Research International, a half-pint of hard cider contains about the same amount of antioxidants as a glass of red wine. Photo: Paul Topp

Centuries ago, when the first English colonies sprang up on the North American continent, so did thousands of apple trees—but not for eating. The imported crop was grown with the purpose of making hard cider, which colonists drank more than water. For a time, citizens were even allowed to pay their taxes with it.
Then, with the prohibition of alcohol in 1920 came a backlash against the staple beverage. Groves were burned, apple trees were torn from the ground, and American cider-making fell into a dark age.
But cider and cider making has slowly blossomed back into the mainstream over the past decade, and is currently experiencing a renaissance not unlike the craft beer movement before it.
“It’s the fastest-growing beverage industry right now,” says co-founder of Santa Cruz Cider Company Nicole Todd. “It was America’s first alcoholic beverage, but prohibition killed it. It’s so cool to see it finally making a comeback.”
Its resurgence is undeniable. Make a stop at any of the select establishments that offer Santa Cruz Cider on tap, like Santa Cruz Mountain Brewing or The Poet & The Patriot, and you’re bound to hear patrons ordering and praising the company’s mainstay, the “Wooden Tooth”—an unfiltered, medium-bodied cider that’s on the drier side. Santa Cruz Cider also offers another variety, its “Blueberry Bomb,” on tap at the Cremer House in Felton.
Todd and her sister, Natalie Beatie, formed Santa Cruz Cider Company in 2013 after two years of experimenting with the cider making process using “strumped” apples from a friend’s grove in Watsonville (“Strumping is the Old English term for stealing apples,” Beatie explains), from which they still source the majority of their apples, amongst other groves in South County.
From gathering apples to grinding, pressing, fermenting, and blending their tasty concoctions, the sisters do all the work themselves—well, most of the work. They recruit their husbands for free labor whenever they can.

“It was my passion for fermenting things that got the family into it,” says Todd.
This passion is now leading her to experiment with more unique blends, like a lavender-accented cider intended for the “the fairer sex,” and a candied orange peel-infused cider that tastes something like the embodiment of fall. Among the many potions they’re brewing, the ambitious siblings are the most excited for their “Gravenstein” (pronounced like Frankenstein), which will make its debut in time for Halloween.
The cider-making sisters are not only stoked on their own growing business, but also on the other local cider makers in the area, like Everett Family Farms, Bonny Doon Vineyard, and Surf City Cider. (See page 119 for more on these ciders.)

“The more cider makers in town, the better,” says Todd. “I would love to see Santa Cruz become a cider destination.”

Surf City Cider:
Santa Cruz Scrumpy
Locally sourced, certified organic, and sulfate free, Surf City Cider has been on the cutting edge of the cider movement since it was created by veteran winemaker John Schumacher of Hallcrest Vineyards Winery more than five years ago. Schumacher and his fellow cider creators use wine yeast for most of their concoctions like the Santa Cruz Scrumpy, which has an “off-dry” taste. Surf City Ciders can be found on tap at establishments like Santa Cruz Mountain Brewing, Beer Thirty Bottle Shop & Pour House, and The Crepe Place. Find it in bottles at New Leaf Community Markets, Staff of Life, and Whole Foods.

Bonny Doon Vineyards:
Querry
Inspired by ciders hailing from the Northwest and Southwest of France—made in a similar fashion to champagne—Bonny Doon Vineyard’s Querry cider is offered in two bottlings. The 2011 Querry is a very dry, crisp cider with a strong pear flavor and a hint of quince, while the 2013 variety is a tad less dry than its predecessor. Both can be found at distributors like Whole Foods. Check out Bonny Doon Vineyard’s cider at the Hard Core Cider Tour on Oct. 10 in San Lorenzo Park from 12 p.m. to 4 p.m.

Everett Family Farms:
Soquel Cider
Using certified-organic heirloom apples from Everett Family Farms, Laura and Richard Everett created the first batch of Soquel Cider in 2014 after studying the cider-making process for seven years. Soquel Cider is pressed and fermented onsite at their farm in Soquel, and can be found locally at Santa Cruz Mountain Brewing, 99 Bottles, The Cremer House, Assembly, and the Cantine Winepub in Aptos.
Tanuki Cider:
Dry Farmhouse Cider
A newcomer on the cider scene, Tanuki Cider uses organic apples sourced from Fogline Farm in Soquel, where Tanuki’s founder, Robby Honda, has worked for the past five seasons. Traveling to the United Kingdom with his English wife and living around apples his whole life inspired Honda to start his own cider line. Honda’s heady 9.1 percent ABV English farmhouse-style cider can be found at Soif, Oswald, Lúpulo, Discretion Brewing, Santa Cruz Food Lounge, and Deer Park Wine & Spirits in Aptos.

The first step to getting started as a cider maker is locking down a large batch of apples to make juice, which Steve Schnaar, director of The Santa Cruz Fruit Tree Project, hopes to make a little easier. The Santa Cruz Fruit Tree Project is a nonprofit devoted to making use of the neglected produce growing in yards that would otherwise go to waste.

“The whole county was once full of orchards,” says Schnaar. “Now, they’re broken up into rural plots that have remnants of the old orchards, so we bring groups together to pick the apples that weren’t going to be used for anything, and press it into juice.”

The Santa Cruz Fruit Tree Project holds apple-pressing events throughout the year that use human-powered equipment built by Schnaar and others from old bike parts and reclaimed wood.
For those without the know-how to build their own pedal-powered equipment, but who still want to try cider making at home, general manager of Seven Bridges Organic Brewing Supply Tallula Preston has apple crushers and hydraulic presses to rent for large-scale operations, and more than a few pointers. She recommends keeping it simple for the first go.

“For beginner cider makers who just want to see what it’s all about, I usually recommend that they get a one-gallon jug of organic apple juice from Whole Foods, New Leaf, or Staff of Life, and then come to Seven Bridges and buy some sanitizer, dry yeast, and an airlock,” says Preston. “The juice is pasteurized so all you need to do is drop in some yeast and put in a rubber stopper and an airlock with sanitizer in it. Then, wait a few weeks, and you have hard cider.”